MONTREAL — It’s a wonderful and merciless exercise to force speakers to talk about something important in just five minutes. I saw that recently at the Montreal International Game Summit during the final session, dubbed the Brain Dump. This session, where the speakers talked about “moments of clarity” in their lives as game designers, really made me think.

I wrote my impressions of three Brain Dump presenters — Vander Caballero,  Amy Hennig, and Mia Consalvo — last week. Those talks made me think about the violence in France and the ethics of game design. But we have more to talk about in reference to video games than just violence, for sure.

Here’s another summary of the talks of the final five: Jason Della Rocca, head of game accelerator Execution Labs; Warren Spector, creator of games like Epic Mickey and Deus Ex and now director of the Denius-Sams Gaming Academy in the Moody College of Communication at The University of Texas at Austin; Brie Code, a freelance programmer and former manager at Ubisoft Montreal on games such as Child of Light and Assassin’s Creed III;  Guillaume Provost, founder of Compulsion Games and a 16-year gaming veteran; and Richard Rouse III, an independent game consultant who has worked on a wide variety of games from The Suffering to Sunset Overdrive.

Truth be told, most of them went over five minutes. But I didn’t mind listening to some extra nuggets of wisdom. 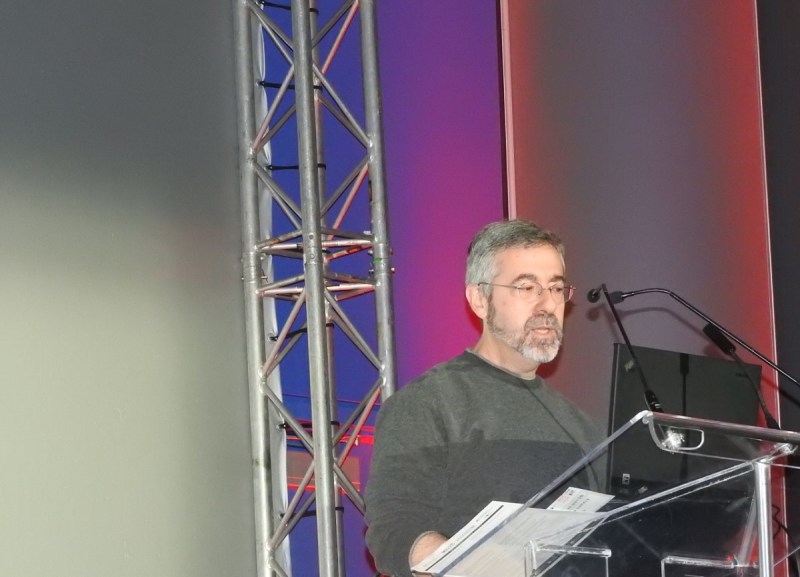 Above: Warren Spector, creator of Deus Ex, wants players to solve their own puzzles and create their own stories in games.

Warren Spector has a friendly argument going with Amy Hennig, creator of the Uncharted series and now creative director working on Star Wars games at Electronic Arts. Spector calls the Uncharted games “low expression” games, where the user doesn’t necessarily get to create much. By contrast, his own games such as Deus Ex and Epic Mickey are intended to allow the player to use games as a canvas for more creative expression and for choosing different ways to solve problems.

His moments of clarity came at a few points in his life. One was when he played Dungeons & Dragons as a youth. His dungeon master was Bruce Sterling, who went on to become a famous sci-fi novelist. He realized that players could take part in a story and affect its direction.

“What was great about that moment in 1978 wasn’t being told a story by Bruce,” he said. “It was telling a story with Bruce and with my friends. That night, I realized that players could be authors. I spent my career trying to recreate that feeling.”

He had a series of moments of clarity all along that theme. With Ultima IV, he realized that games could have the same thematic depths as movies or books. In 1989, he was watching a playtester play Ultima VI, doing something that was completely unplanned, something that the game designers hadn’t expected. Spector said he wanted such unpredictable moments happen all of the time in future games, so players wouldn’t have to play the way that he wanted them to play.

Then, in June 2000, he launched Deus Ex, where players could solve problems using their own paths. They could play in stealth mode or go in guns blazing.

“I realized we could make a game where play style mattered,” he said. “The choices you made reflected on you.” Spector extended that theme in Epic Mickey, launched by Disney in 2010.

“We haven’t recreated that D&D moment,” Spector said. “I’m still waiting. I haven’t felt that awe and wonder at the creative power that players have. I am pretty confident we will. To be frank, I have no idea how to do it. I have some ideas. I’m hoping someone in this audience knows how to do this.” 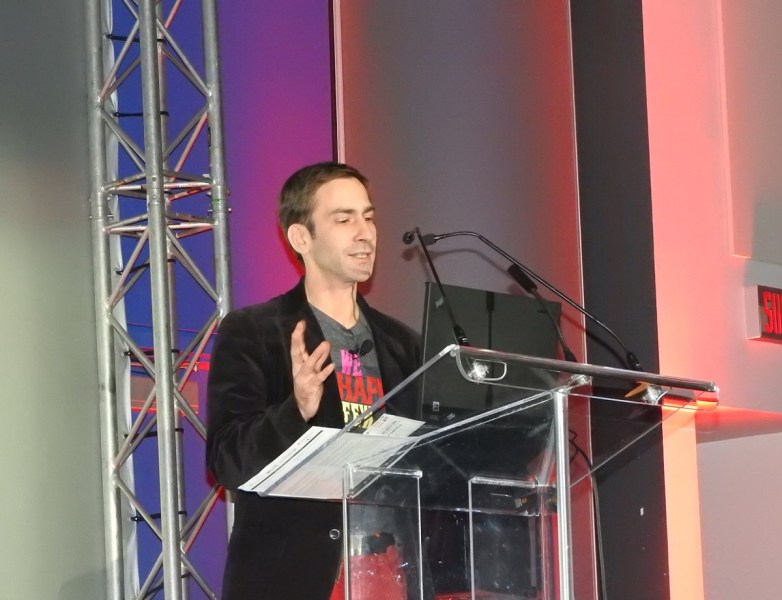 Guillaume Provost has almost two decades of experience making games. Early on, he once got advice from his friend David Perry to go where the game industry is thriving, if he wanted to get into the game business. So Provost left Montreal and went to various places like Lyon in France, Toronto, and other places.

He succeeded in breaking into the industry. He served as a technical director, producer, and creative director at places like Pseudo Interactive and Arkane Studios. One boss told him to start his own studio. But Provost was worried. He had studied the crash of the video game business in 1983, when an oversupply of duds brought down everyone. Lots of studios went out of business. Only the bigger companies survived and thrived.

Provost worried that becoming an indie game developer in 2008 would be the dumbest move he ever made. And for a while, it was scary. The financial meltdown of 2008 and 2009 erased a lot of weaker publishers and studios. Provost didn’t think indie game studios could survive the perfect economic storm.

But he had a moment of clarity and started the company Compulsion Games anyway. And it was the best move he ever made.

“The truth is I wasn’t that smart,” he said. “I did a lot of thinking. There was nothing rational about starting a studio. I did it because I could create my own worlds on my own terms. It was the one time in my life where the stupid decision was the right decision.” 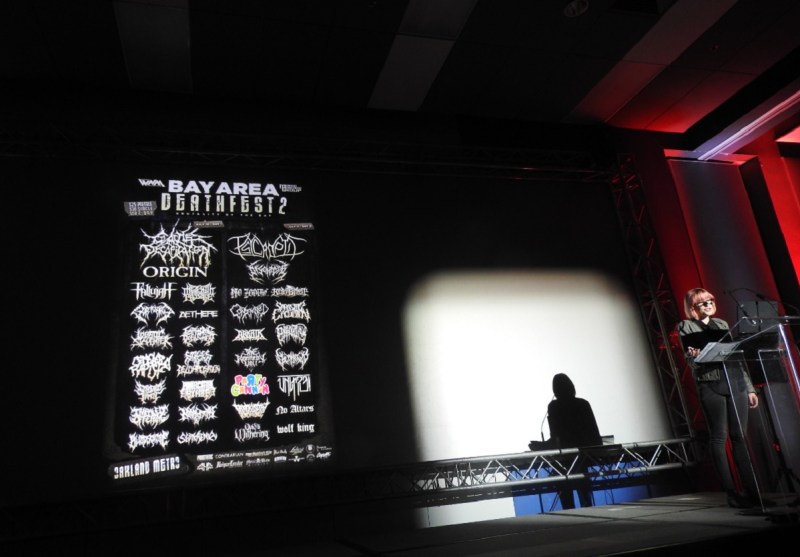 Above: Brie Code shows an image of what it feels like to be the only different person.

“It’s sad for me,” she said. “It’s also sad for the industry itself.

Research, she said, shows that diverse teams can perform better than teams of experts. You can hire the best programmers, one after another, and not wind up with the best programming team, she found.

“You need to think on the team level, not on the individual level,” she said. “Diverse work forces show measurably more innovation, better financial performance, and they instill confidence better and faster.”

Adding different people to the team unlocks new ideas and leads to better group intelligence, she said. Innovation happens when you make connections between people who are different, she said.

Code decided to take the plunge and leave her comfortable job at Ubisoft. She’s starting something by herself, and it’s the best move she’s made, she said. 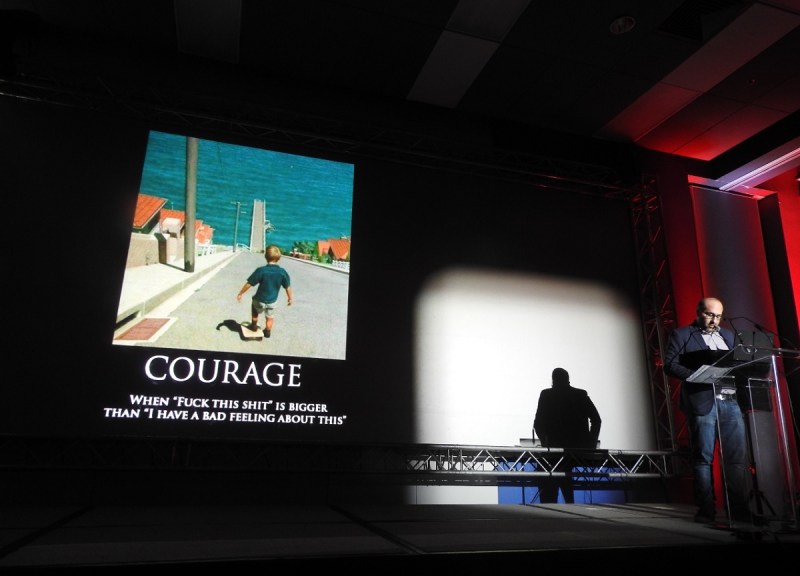 Above: Jason Della Rocca wants game developers to have courage.

“I’ve been fired from most of my jobs,” said Jason Della Rocca, cofounder of game accelerator Execution Labs. He always spoke his mind, and that cost him his job.

By the time he was hired as executive director at the International Game Developers Association, he had been fired from a handful of games. During his tenure there, several times a year, the board would threaten to fire him.

He got sent to manners training once, and was told to read How to Win Friends and Influence People. But the board couldn’t instill any fear in him, since Della Rocca felt like he was Neo in The Matrix, able to dodge bullets coming at him. He made the decisions that he needed to, and he took risks. After nine years, he stepped down.

He went on to consulting. But that didn’t work for him since he got fired from most of those jobs.

“Most people didn’t want to hear what I said,” he said.

He cofounded Execution Labs, an accelerator for game startups. He pitched it to VCs. The first one he met said, “That is shit. Why should I care about that?” Della Rocca said it didn’t faze him. The VC eventually invested.

“Having a certain resilience to deal with to criticism. A resistance to failure. This is one of the things we look for in startups,” he said. “We give them tough love. This is a fraction of the criticism they will encounter in the real world.”

He added, “The moment of clarity is this. Once you have seen The Matrix, those powers don’t affect you anymore. You have a sense of fearlessness. The challenge is if I tell you these incoming bullets won’t affect you, that’s not quite right. You need to experience it. You need to get shot and stand back up. It’s question of having the courage and standing there and realizing that you are bulletproof.” 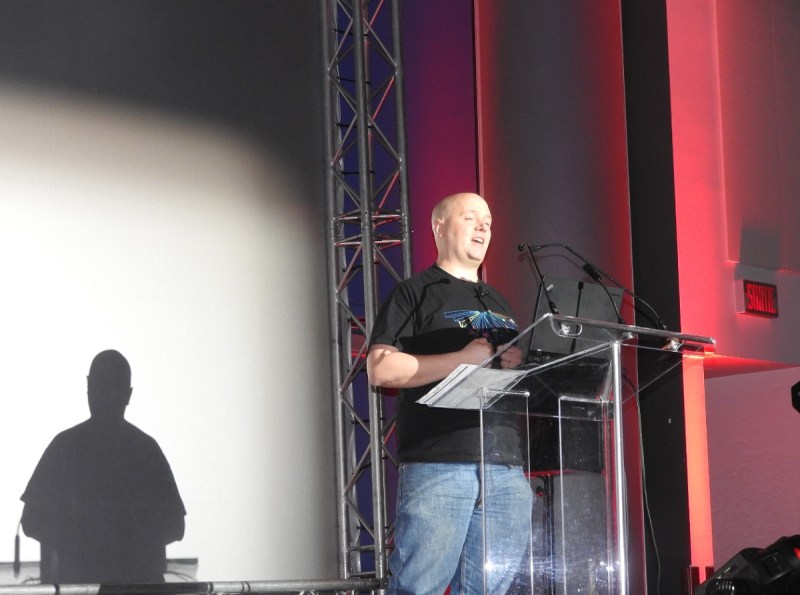 Above: Richard Rouse III has worked on games such as Sunset Overdrive and The Suffering.

Richard Rouse III has been making games for a long time. His projects have included Sunset Overdrive, State of Decay, Quantum Break, and The Suffering. He has worked at Microsoft, Ubisoft Montreal, Midway, and Surreal Software. Now he works on indie games. He sees eye-to-eye with Spector on putting the player in control of the story. He felt that way ever since he saw a scene in the sci-fi film Farenheit 451, which showed a futuristic interactive TV. He wanted to create games that changed based on how you played them.

He contemplated the recent Back to the Future day, when people lamented that the predictions (like flying cars) of the futuristic film had not come true. Those dynamic narratives, like the Butterfly effect story in Until Dawn, are rare.

“Where are all of the interactive narrative games?” Rouse asked. “They are few and far between. We have a lot of games that are linear narratives (like films). We have a lot of open worlds with a ton of player choice but still very fixed narratives within them. I love those games. They should exist. But should they be the vast majority of games? If back in 1985, 30 years ago if you told me most of the video games now would be linear stories, I would have thought you were insane.”

He noted that an interactive story in a game doesn’t have to be perfect. An analogy is in pottery. Two sets of students were told to make pots. One was told to make the perfect pot. The other was told to make lots of pots. The one that came out with the best pot? The second group.

“We need to make a lot of different valiant attempts at interactive narrative,” Rouse said.