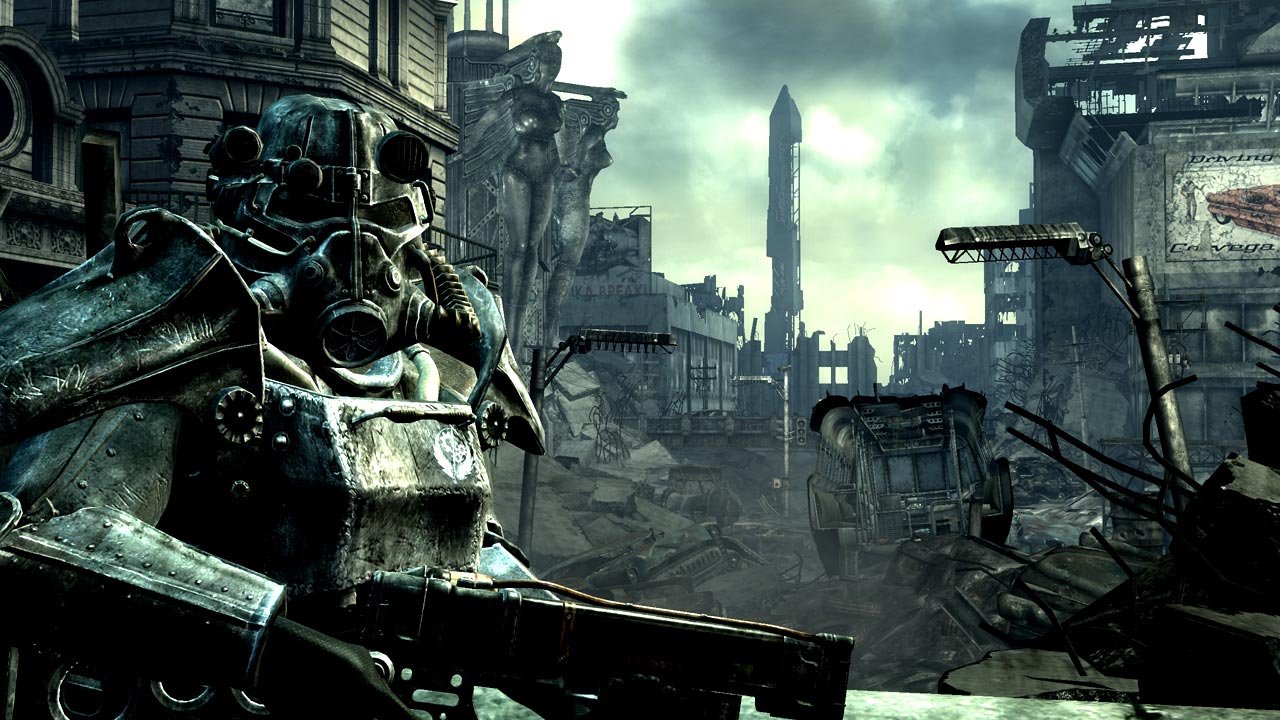 Above: The setting for Fallout 3 shifted to the wasteland of Washington, D.C.

This time, the player finds himself in the East Coast in 2277, in what used to be Washington D.C., Maryland, and Virginia. The main character is from Vault 101, a nuclear shelter designed to protect people. The vault has been sealed since the war started 200 years ago.

However, the Lone Wanderer’s father, James, escapes the vault one day, leaving the main character behind. The Overseer sends forces after the player, forcing the Lone Wanderer to leave the vault and look for James. After journeying through the Capital Wasteland, the Lone Wanderer saves James from Vault 112, where Dr. Braun, the vault’s Overseer, trapped him in a virtual reality program. James, who is a scientist and a doctor, was searching for the GECK to complete a water project he had started with his late wife, Catherine.

The player will once more encounter the Brotherhood of Steel, who will help them fight the Enclave. They send Colonel Autumn, the commanding officer of the Enclave’s Department of the Army in the Capital Wasteland, to kill James. The Lone Wanderer is captured and discovers the president of the Enclave is actually a supercomputer, whose goal is to infect the water with the Forced Evolutionary Virus. The player will have to decide on convincing the president to self-destruct or to simply leave the base. 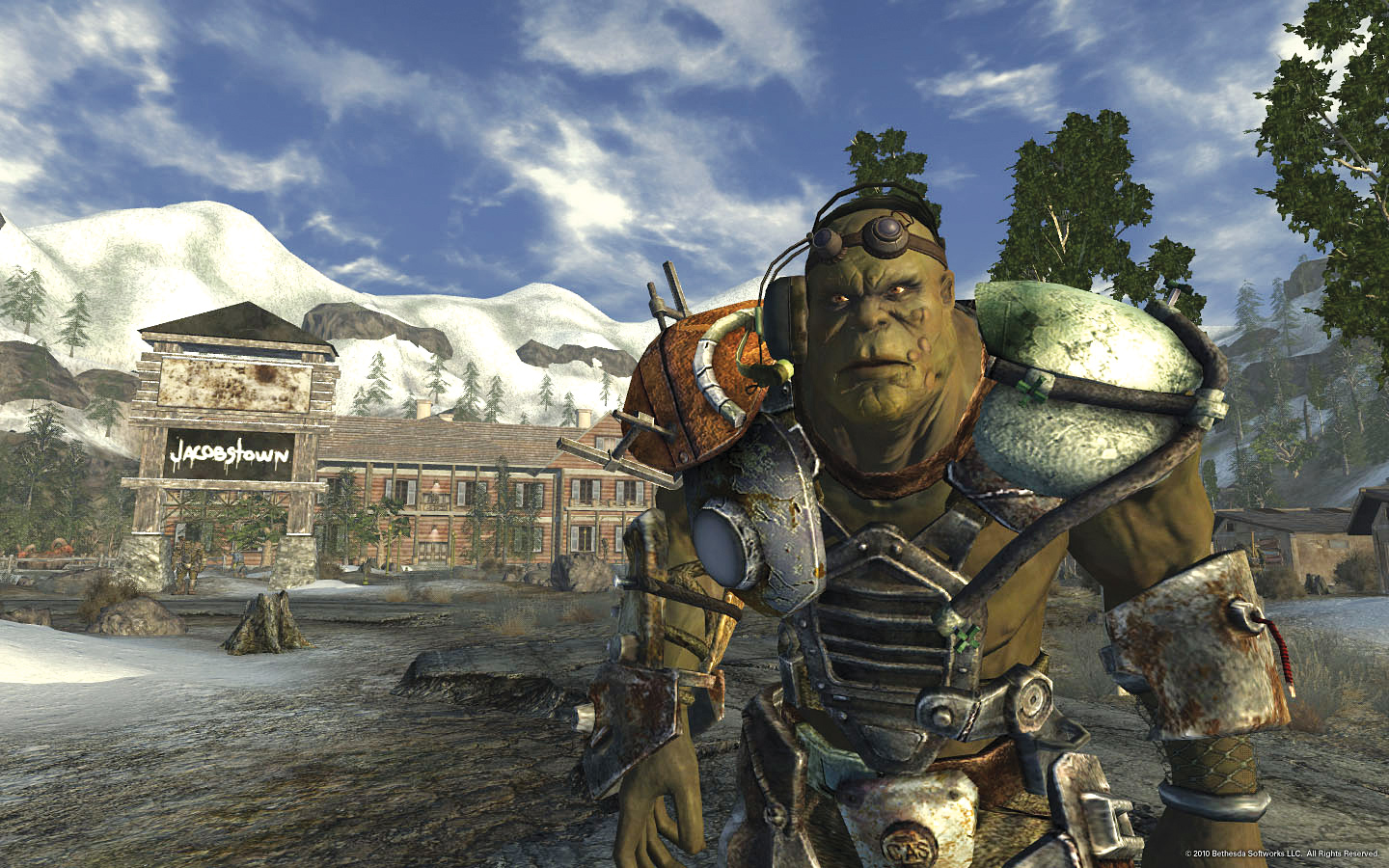 Above: Marcus the supermutant was once part of the Master’s Army. But he mellowed in his old age.

In Fallout: New Vegas, the player controls the Courier, who searches for the gunman who shot him in the head and left him for dead in the Mojave Wasteland. The story takes place in 2281 in Nevada, California, and Arizona. Here, three powerful factions try to control the Hoover Dam, which supplies the Southwest with power and clean water.

A robot named Victor finds the Courier in the desert and brings him to Doc Mitchell, who will help him get back on track. The Courier, who used to work for the Mojave Express, goes on a mission to find his killer, who also stole a package containing the Platinum Chip he had to deliver in New Vegas. The main character finds himself in a conflict opposing three different factions. The player will have the option to choose who to help, which will influence the rest of the game. The Courier may also help his would-be killer, Benny, to take over New Vegas thanks to the Platinum Chip. This tech is a data storage device with a program allowing robots like Victor, called Securitrons, to have better combat capabilities.

The ending will vary according to the player’s decisions, showing who will take over Hoover Dam, New Vegas, and the Mojave desert. 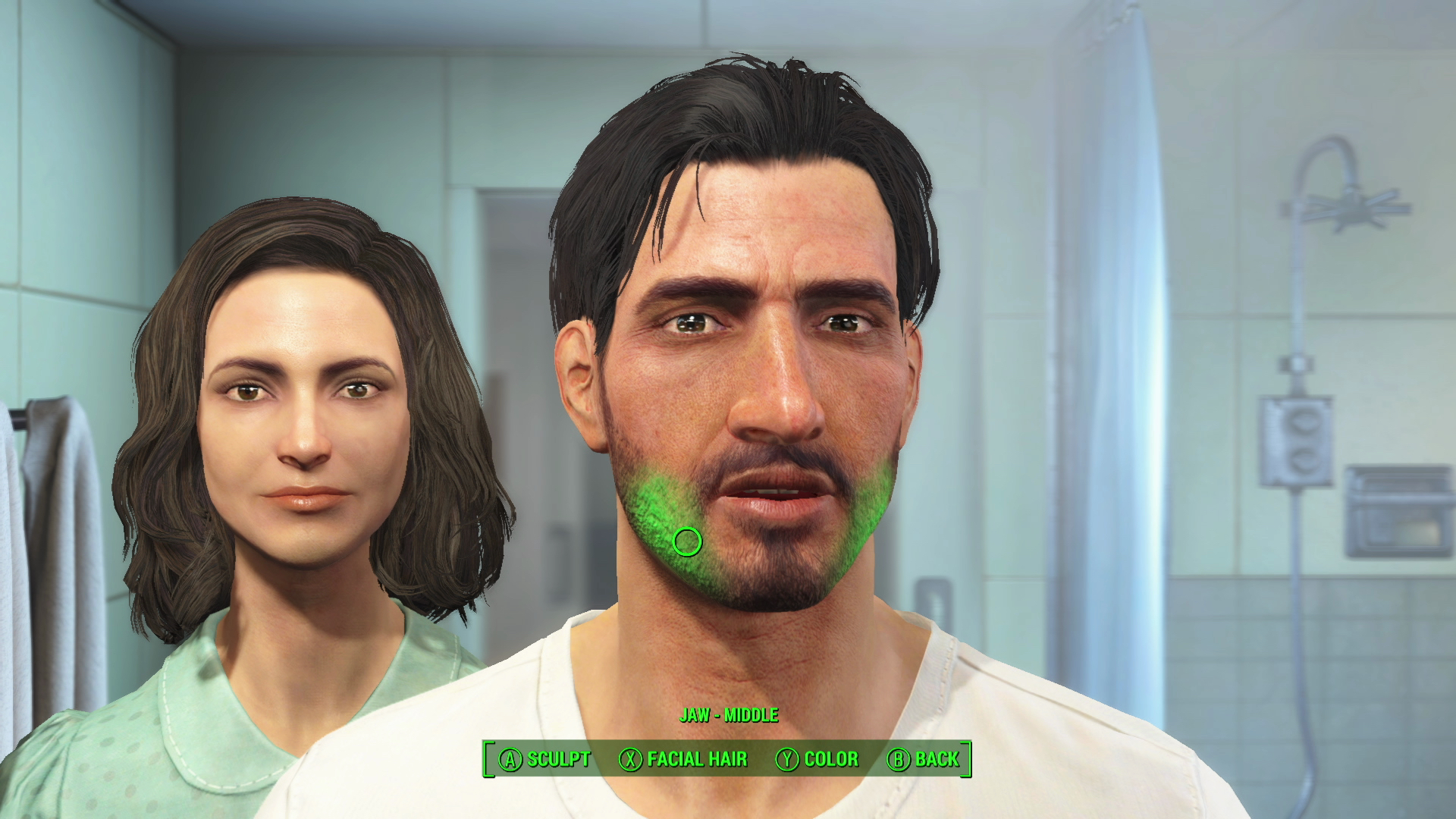 Above: One of the new additions to Fallout 4: You have more control over your looks and gender than ever before in the series.

Fallout 4 begins in the morning of October 23, 2077, with a couple and their baby preparing for an event at Veteran’s Hall. Their morning routine is interrupted when a Vault-Tec representative comes to inform the family they have been admitted into Vault 111. The family then rushes to the bunker as a news flash informs them of an imminent nuclear attack. They are saved in extremis and put into cryosleep.

They awaken 200 years later by two unknown individuals who are trying to take the baby, Shaun, away from one of the spouses. When the spouse resists, one of the strangers kills them (depending on your initial character selection), taking Shaun with them and sending the main character back into a deep cryosleep. Once the survivor awakens again and escapes the cryo tube, the character goes on a mission to find Shaun and avenge their spouse. 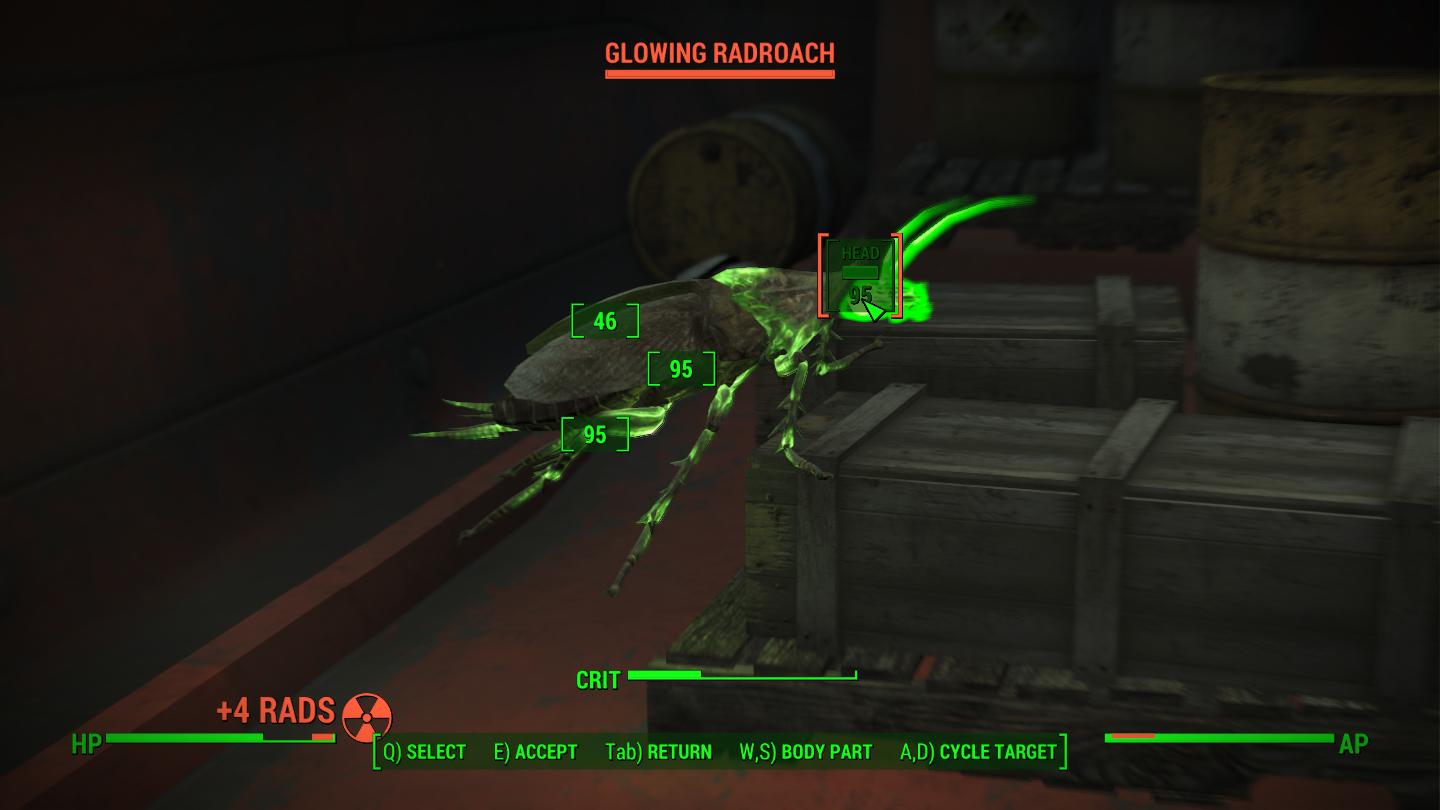 Above: Fallout 4 V.A.T.S. system helps those who aren’t good at shooting in games plan out their shots.

From the beginning, Fallout was designed to be an open world role-playing game. The games send the player out into a hostile world to explore the universe and find tools, weapons, and other resources necessary to survive. As the story unfolds, the character levels up and earns skill points to distribute in S.P.E.C.I.A.L. categories. The games rely on the system called S.P.E.C.I.A.L., an acronym for Strength, Perception, Endurance, Charisma, Intelligence, Agility, and Luck. In Fallout 4, players can choose from a combination of 275 skill points and attributes. In past games, players used to be able to earn karma points based on actions taken throughout the game, but the feature has been removed from Fallout 4.

Since Fallout 3, the series has included features such as real-time combat and a third person perspective. Fallout: New Vegas brought a new way to attack called Vault-Tec Assisted Targeting System or V.A.T.S., which lets the player slow time down to better target the weak parts of the enemies’ bodies, transforming the game into more of an RPG and less of a shooter.

In Fallout 4, the player can choose a male or female character and customize their appearance. The game also offers a system that will allow gamers to craft weapons and armor by using items they find in the Commonwealth, Fallout 4’s setting. The character will be able to build settlements and fortify them with prefabricated structures using specific items. These settlements can grow, and players can bring in NPCs, or non-player characters, to populate them and create businesses.

Another particularity of the Fallout games is the use of NPCs as companions during missions. In Fallout 4, the character can choose one to come on quests. They cannot die and the protagonist can become romantically involved with them, whether they are male or female. There is a German Shepherd called Dogmeat, who is also present throughout the game. He fetches items and performs tricks as well as helping in combat.

Finally, the character in Fallout never goes exploring without a Pip-Boy, which is a wrist device allowing the player to check on the map, quests, items, skills, weapons, and armor. If players want to immerse themselves in the game universe, Fallout 4 offers a companion mobile app that can serve as a real-world Pip-Boy.