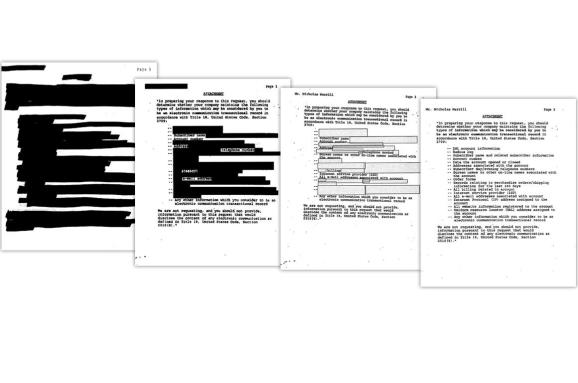 In 2004, the Federal Bureau of Investigation issued a National Security Letter (NSL) to a New York Internet service provider called Calyx. It’s a type of governmental information request that became much more common as a result of the passing of the USA Patriot Act in 2001, just after September 11.

All this time, this specific NSL — and hundreds of thousands of others — has been under wraps thanks to a gag order. But today this document is publicly available for the first time, following U.S. District Judge Victor Marrero’s decision to lift the gag order in September.

The document, which was sent to obtain information about a specific Calyx subscriber, is impressive in its scope. It shows the FBI searching for the subscriber’s name, account opening date, web service screen names, purchase records for the past 180 days, physical addresses, email addresses, a “radius log,” and “any other information which you consider to be an electronic communication transactional record.” (See the image above for more types of information the FBI sought.)

Many contemporary technology companies have received NSLs. Last year Facebook, Google, Microsoft, and Yahoo went to court to try to get the federal government to allow them to disclose the number of NSLs they receive. LinkedIn and Twitter, among others, have also received NSLs.

Hat tip to Ars Technica for reporting on the document. The Yale Law School and the American Civil Liberties Union have more on the case.