Creativity software giant Adobe has launched its first ever video-editing app for Android. First introduced for iOS last October, Adobe Premiere Clip is free to use, and is essentially a stripped-down version of Adobe’s full-bodied video-editing software.

While Android has historically lacked many of the flagship apps that were available on iOS, that largely isn’t the case anymore. However, one thing Android has lacked over the years is decent video-editing software. There are a bunch of neat little social-focused apps such as Magisto that can automatically stitch together photos and videos and throw in some music, but what I’m talking about is full-featured editing tools that can produce something akin to Adobe Premiere on the desktop.

One that I have found is KineMaster, which has most of the features you’d want in a video-editing app, while CyberLink’s PowerDirector recently launched for Android phones, having previously been restricted to tablets. So how does Adobe’s Premiere Clip stack up? We take a look.

One facet of the Adobe Premiere Clip app that may deter some users is that you need an Adobe ID to use it. If you have one already, then no problem; but if you don’t, you’ll need to sign up. Adobe goes beyond the basic credentials, too, so you’ll have to provide date of birth, which seems somewhat extraneous to me.

Once in, you select which photos and videos you wish to add to a new project, and then you have two options. You can elect to use the Automatic mode, which is similar to Magisto insofar as it’s aimed at a general user base who don’t care too much for manual editing. This works really great, actually — you get a mini montage of your chosen content set against a musical soundtrack. 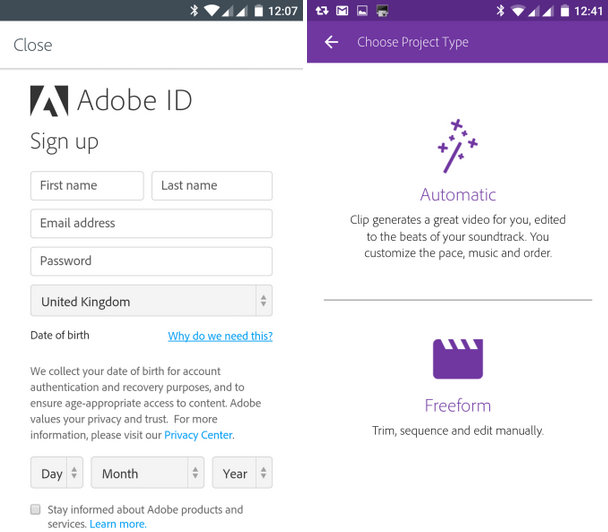 Above: In the beginning

But we’re going to look at the Freeform element of Adobe Premiere Clip to see how much bang you get for your (free) buck.

When you first launch the app, you’ll be asked to open an existing project or create a new one. To create a new project, you have a bunch of options — for example, you can choose videos and photos from your device, you can shoot fresh content on the spot in-app, or you can even choose from your existing assets on Adobe Creative Cloud. For most non-Adobe users, the only real option here is to choose content from the device.

This is where the first minor issue arises. Rather than letting you easily filter by “videos” and “photos,” you’re presented with a mammoth list of folders of every single image or video on your device — this includes album artwork, WhatsApp photos, and more. 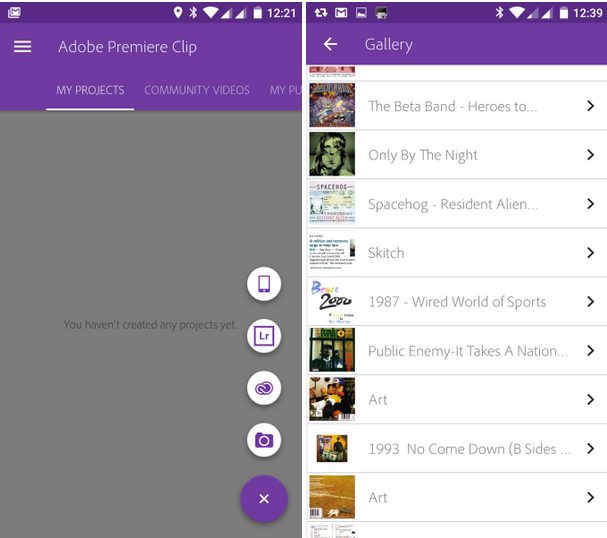 Ideally, there would be a way of filtering out all the noise, so that you only see your camera roll. Moreover, you should also have the option of hiding photos, so that only videos are visible. Even once you’ve navigated to your camera roll folder, it’s not that easy to find all the videos.

Another issue is that you can’t select files that are larger than 1GB, which seems an unnecessary limit; also, there’s no option to work in landscape mode. It’s such restrictions that make me think this app isn’t really for serious video editors.

At any rate, with all your files selected, you can then drag and drop them into whatever order you wish on your canvas, slice and dice, add Instagram-esque effects, and more. 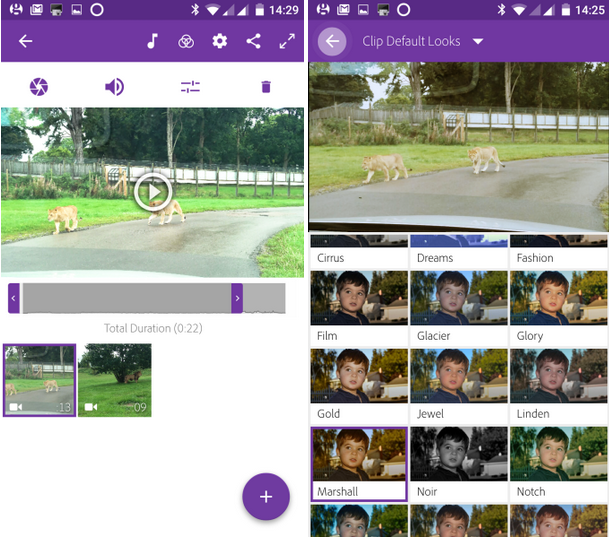 I also found the two separate menus across the top confusing. Just above the video frame there are editing options to set exposure / highlights / shadows, as well as tweak the audio level, video speed, and delete clips. Then above this is another menu which serves up more options, such as adding music (includes a royalty-free stock library) and visual filters. I understand that there is limited screen real estate within mobile apps, but I think it could’ve been laid out more intuitively.

Other handy features include fade-in / fade-out effects and cross-fades between clips. These work great, but there appears to be no option to set how long such transitions should last. Sometimes you may wish a quick cross-fade between scenes, other times you’d want a more gradual one.

Exporting the video is a cinch, and you have many options. You can publish directly to the Adobe community for others to view, send to Premiere Pro to pick up where you left off in the mobile app, save to your local gallery or Creative Cloud, or even publish directly to YouTube. 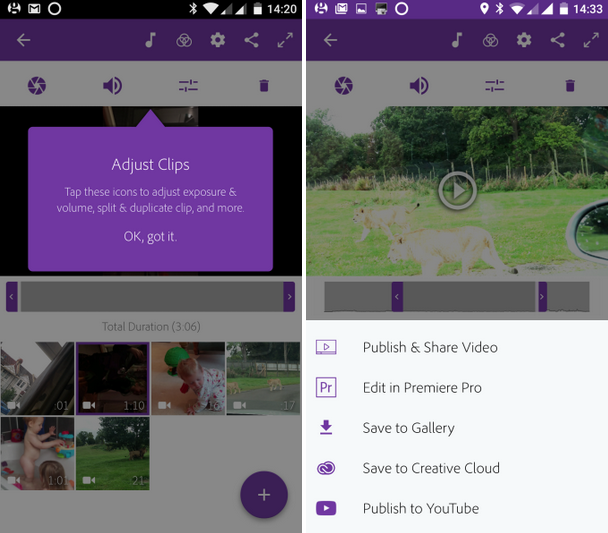 Adobe Premiere Clip for Android is a mostly easy-to-use app for making quick edits and stitches. The Automatic video mode is really simple and should prove popular for those with tons of content on their phone but no time (or inclination) to make a home movie out of it.

The app is also useful for existing Premiere Pro users, who can start working on their phones, then continue with more heavyweight editing on their desktops — all edits, markers, and effects are easily synced across.

However, as a standalone video editing app, there are better ones out there for the more serious creators. For example, KineMaster offers more granular control over things like transition durations, and it doesn’t set arbitrary file-size limitations. Unlike Adobe Premiere Clip, KineMaster also lets you separate videos from photos, which is handy if you have too much content on your camera.

Adobe Premiere Clip is a nice little free app, with some useful tools on board, but I suspect it’s best suited for those already plugged into the Adobe ecosystem, or for those looking for a simple manual video-editing tool.