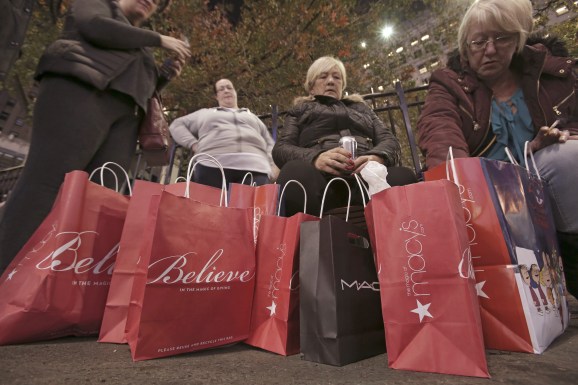 This year more people chose to do their holiday shopping from home — or from wherever they’re using their phones.

More than a quarter of online purchases Monday were made on a smartphone or tablet, and over 75 percent of those sales were made with an Apple device. Walmart too noted that over 70 percent of visits to Walmart.com came from mobile devices.

Though sales on Thanksgiving and Black Friday were cumulatively greater than those on Cyber Monday, in-store sales took a dive. Shoppers spent $12.1 billion in stores, down from $13.6 billion last year, according to a report from PYMNTS. Online, shoppers spent $2.752 billion over the course of the two days, up roughly ten percent from last year, according to data from comScore.

People are increasingly choosing the comfort of their couch over a battle royal for a PlayStation 4 at the local Best Buy. Perhaps they know those Black Friday deals aren’t all they’re cracked up to be.

Thanksgiving weekend is a good time to buy stuff. What better way to fill the idle hours spent with family than by doing a little holiday shopping? The Monday morning following that weekend is less ideal — even with the promise of great deals. With more retailers bringing their Black Friday sales online, the line between Black Friday and Cyber Monday is blurring — a trend we noted last year.

In fact, the deal cycle is no longer limited to just Thanksgiving Day weekend. This year we saw Amazon start offering its Black Friday deals on November 20, a week ahead of time. Meanwhile, Target devoted an entire week to its cyber sale. Still other retailers are dragging discounts into December.

Even with the growth in online shopping, there’s room to expand sales further: Shopping cart abandonment still costs retailers 36 percent of sales, according to PYMNTS.com.

All this online activity doesn’t mean that consumers will stop shopping in stores on the holiday weekend — retail sales are still by far the biggest piece of the pie. But the crazy fights and long lines of Black Fridays past may soon become a relic.