Google today announced the Songza website and app will be killed off on January 31, 2016. The Google Play Music team has been working hard to port over Songza’s features, and as of today the two apps have reached feature parity. As a result, Songza users are being given two months to make the switch.

Google acquired Songza in July 2014, when a spokesperson said, “No immediate changes to Songza are planned, other than making it faster, smarter, and even more fun to use.” Songza features naturally started to trickle into Google Play Music: In October 2014, contextual playlists were added (Songza’s Concierge feature) to the subscription streaming service and in June 2015, a free ad-supported web radio service (Songza’s curated playlists) was added for U.S. users.

The latter feature is also launching in Canada today. Because Songza was only ever available in the U.S. and Canada, this means all Songza users are now covered by Google Play Music. While Google’s app is available in 60 countries, only the U.S. and Canada currently have free radio, while 13 countries have Concierge (France, Sweden, and Norway were added only this week).

Again, Songza’s most popular features (curated stations, free radio, cheeky playlists) are all built into Google Play Music now for free. In other words, if you’re still using Songza, you really have no reason not to switch. And the service’s four founders, all of which are still at Google, urge you to take the plunge:

I had the opportunity to speak with two of the four, Elias Roman and Elliott Breece. I specifically asked if there was anything that a die-hard Songza user may miss if they switch to Google Play Music. Roman said, “While I guarantee you could find something,” and Breece added, “Maybe something in the settings menu…” Short answer? No.

In fact, even though Songza is essentially dead at this point, the founders still use both apps every day just “to make sure there’s parity.” The founders really want to get the transition right. Hell, if they didn’t, Songza would have died a much quicker death.

Songza users are being notified of the Google Play move on the service’s website, in the app, and by email. You’ll definitely want to visit the app: Users can migrate their accounts to Google Play Music, including all their favorite songs and playlists. That means favorited stations, recent stations, and even thumbs-upped songs get moved from Songza to Google Play Music.

All you have to do is hit the orange button: 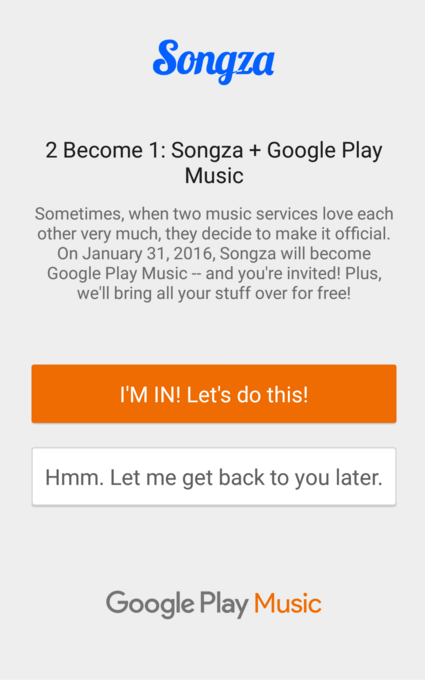 The good news is that when you link your Songza account to Google Play, all the syncing happens in the cloud, Roman and Breece explained. So if you don’t have Google Play Music downloaded, you lose connection, or you just get distracted, none of that will matter because your Songza data will be transferred over regardless.

The Google Play Music team “wants to focus on building one product.” So with Songza out of the picture, what’s next for Google Play Music? The promised family plan and podcast support are still on the way.

But the broader goals are even more interesting. Both founders agreed that music services today still have a lot of friction.

“Our vision is always to improve what people do every day with music,” Roman outlined. Like Songza before it, the goal of Google Play Music is to provide you with the right song at the right time, not just simply to output audio.

To compete in the vicious online music industry, Songza’s features will have to roll out to all of Google Play Music’s 60 countries. Given licensing issues and the fact that Concierge has to be built from the ground up for each country, that’s not an easy feat.

But first, the old app has to retire smoothly. Here is the email sent to Songza users today:

In a nutshell, we built Songza to make life better by playing you music tailored to every moment of every day.

In July 2014, Songza was acquired by Google (#ConsciousCoupling), and in them we found a company who shares our excitement for IRL soundtracking. Over the past year and a half, we’ve worked hard to bring all of the features that you love from Songza to Google Play Music, including the Concierge and our massive library of hand-curated playlists — from Walking On Sunshine to Hillbilly Bodybuilding, no moment shall go un-soundtracked.

Thanks to Google Play Music (and our kick-ass team, which continues to grow faster than a Twista verse), we’ve been able to bring what you love about Songza to a new audience of music fans in the United States, Great Britain, Canada, Ireland, Brazil, Japan, Germany, France, Norway, Sweden, Australia, New Zealand and Austria (*wipes brow*) — with even more countries coming soon.

It’s now time for us to focus on building a single, cohesive product. So as of January 31, 2016, Songza will become Google Play Music, and you will no longer be able to access Songza.com or the Songza mobile apps. HEY! There’s no crying! Are you crying? There’s no crying in music streaming! Moving to Google Play Music is free, and your favorite playlists can come with you! Pinky swear. Soon, when you visit Songza, you’ll be greeted with a prompt that will let you bring all of your Songza listening history and favorite playlists over to Google Play Music — so please make sure to do that! Using all of Songza’s features in Google Play Music is 100% free and doesn’t require a credit card, you just need to accept our new Terms of Service and Google’s Privacy Policy (if you haven’t already).

Thank you SO much for being a part of the Songza community over all of these years. We’re really proud of the work that we’ve done on Google Play Music and we truly hope you’ll join us there.