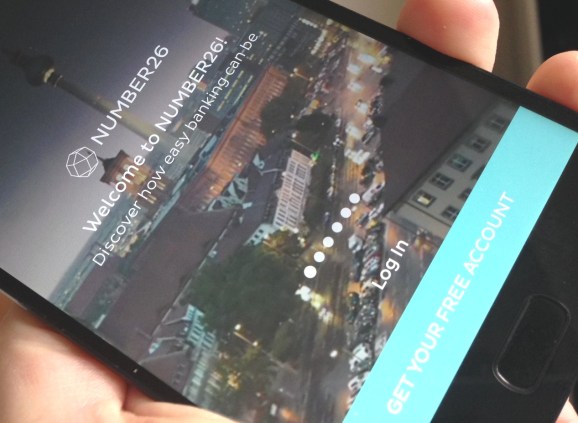 Number26, a Peter Thiel-backed German startup that’s setting out to create the bank account of the future, has announced a major European expansion today, as it launches in six new markets.

Founded out of Berlin in early 2013, Number26 offers “mobile-first” bank accounts, which have only been available in Germany and Austria since the product first launched in January this year. But from today, the banking service will be expanded to include France, Spain, Ireland, Greece, Slovakia, and Italy.

Number26’s goal is to create a true pan-European bank account, and the company is calling today’s rollout the “first step toward offering a borderless banking experience across Europe.” This also ties in with the broader E.U. shift toward creating a single unified digital market across all 28 constituent countries. But more than that, the startup wants to distance itself from the turgid bureaucracy of traditional banking, instead offering a slick, speedy, real-time experience built for the smartphone age.

Number26 follows in the footsteps of other notable banking startups, including America’s BankMobile and Simple, the latter of which was acquired by Spain’s BBVA for almost $120 million last year. Elsewhere, a slew of European startups have emerged to “reimagine” bank accounts — these include Monese in the U.K., as well as the soon-to-open Tandem Bank, Starling Bank, Mondo Bank, and Atom Bank, and the business-focused Holvi.

So it’s a busy space, for sure, but Number26 has some solid backers that could stand the startup in good stead. In April this year, the company announced a fresh $10.6 million in funding, with PayPal cofounder Peter Thiel’s Valar Ventures leading the round. This was only Valar’s second European startup investment.

Moreover, now that Number26 is available in eight countries, it becomes the first of this batch of “mobile first” banking startups to truly go international. Today, Number26 has 80,000 account holders, and it plans to hit 100,000 by the end of January, by which time it will have been a full 12 months in business.

At Dublin Web Summit last month, VentureBeat caught up with Number26 cofounder Maximilian Tayenthal, who showed us how the service works, and discussed the company’s ambitions for the future.

Number26: How it works 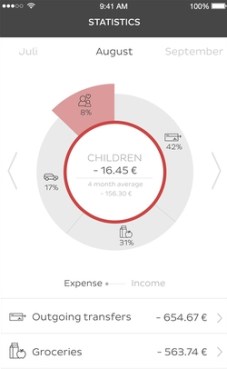 The process of opening a bank account varies from country to country, but many Europeans are accustomed to a wait that may last days or weeks, depending on their circumstances. Through Number26, a new bank account takes about eight minutes to open, the company promises, which happens in-app with verification through online video chat.

As with most modern banks, Number26 issues a bank card (MasterCard) which can be used to purchase items in-store or withdraw money from ATMs globally.

Though the company offers a Web-based interface, accessible through your desktop computer, Number26 is all about its smartphone apps, which are available for Android and iOS. All transactions show up instantly, and there is a dedicated statistics section that provides a category-specific breakdown of your expenditures.

This can be useful, though it may not tell the whole picture. For example, it can automatically figure out that you’ve spent $800 in hotels in a given month, but it has no real way of knowing what proportion went to accommodation, or a restaurant within the hotel, or even those eight expensive cocktails you bought at the hotel bar. Still, it’s a useful feature for being able to broadly observe how much you’re spending on what kinds of things. 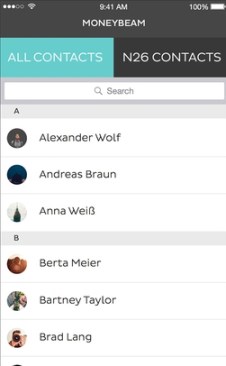 Number26 is also set up to make it easy to transfer money to other accounts. You can see a list of your telephone contacts who already have a Number26 account, and transfer cash to them by SMS, which happens in real time. For external transfers, the recipient receives a short message alerting them that the money has been set aside in the sender’s account, at which point they can enter their IBAN number to receive the cash.

Though we are fast heading toward becoming a cashless society, we’re not quite there yet. One of the key benefits of brick-and-mortar banking is that you have a physical place to deposit money, and this is something Number26 has considered. It has a partnership in place that lets its customers deposit cash through 5,000 retail stores across Germany. This service isn’t available in the new markets yet, but we’re told that the company is working to find partners for a similar service in other countries, too.

Number26 has also just launched an overdraft facility, but this will also be exclusive to Germany, for now.

It’s worth noting here that Number26 doesn’t actually have its own banking licence in place yet. It has partnered with Germany-based financial services company Wirecard, which does have a banking licence, and is regulated in Germany.

Though Number26 has gotten off to a promising start, prospective customers in its new markets should know that the company doesn’t yet offer local bank account numbers, though it may in future. This could prove a major sticking point for some.

Simple things, like forms and contracts that require bank details, for example, often have a set number of boxes tailored to the layout and format of the country. I also spoke with a couple of U.K. mobile networks, and a well-known gym, who confirmed that they can only accept direct-debit payments from domestic bank accounts. This effectively means that anyone with a Number26 account would not be able to sign a contract with it.

Of course, Number26 isn’t launching in the U.K. yet. So is this really a problem in the other six new Number26 markets? Maybe, maybe not. It turns out that there is a regulation in place stipulating that companies across the E.U. must accept ANY European bank account number for direct-debits by February 2016, at the latest.

So while Number26 is still exploring the feasibility of introducing local account numbers, E.U. regulation should be sufficient to ensure frictionless cross-border transactions. But it’s not clear at this juncture whether all companies will be compliant with the regulation in time.

But how much does Number26 want to scale — it’s now in eight markets, what about elsewhere? What about the U.S.?

“The financial services market is not a niche market — if you have one percent of the German market alone, let’s say one million accounts, you have a billion-euro company,” said Tayenthal. “You wouldn’t even have to go outside of Germany. If you go into Europe, that’s 400 million customers.”

Also, the way Number26 is currently set up means it can operate across the European Union fairly easily, but any move to enter non-E.U. markets would be a different proposition.

“It’s a highly regulated market, but the E.U. has done a lot to foster trans-national competition,” said Tayenthal. “And they did it by aligning the regulatory frameworks, so within the E.U. it’s pretty easy. If you have a German banking license, you can do business in France or anywhere. But once you go outside the E.U., well, it’s different regulations.”

What we’ve seen over the past twenty years is long-established industries disrupted by agile, plucky, young Internet upstarts. And while the sea change has perhaps been less pronounced in the financial services industry, there has been some notable progression. PayPal is one example of this, of course, as a company that at one point was synonymous with eBay and online payments. Its cofounder, Peter Thiel, is now also backing Number26 for glory. London-based TransferWise has also been hammering cracks into the lucrative currency exchange market with its peer-to-peer alternative that bypasses bank fees.

As for the traditional consumer banking sector, the Internet has enabled people to bank online and through mobile apps for some time, but the experience often feels as though it was built for another era. Number26 is going all-in with a service that focuses on user-friendliness and was built with smartphones in mind.

“Nobody is focusing on optimizing the user experience — if you look at it from a product perspective, if you look at a lot of industries, that have been disrupted before, like the travel industry, music, movies, transportation — revolution never came from the companies,” said Tayenthal. “It came from the outside — someone getting in the market, really hungry, really desperate to get customers to build up that trust. When we designed our sign-up process, we were discussing every snip of information we were asking the customer for. Which is necessary, which is not. If it’s not necessary, we don’t ask for it.”

20 years ago, many people questioned whether consumers would be prepared to punch their credit card details into an online bookstore. It turns out people were more than willing to buy just about anything through the Internet. Just as familiarity and trust grew with online transactions, web-based banking could eventually flourish too, though for the most part, people’s online banking experience is very much tethered to nearby brick-and-mortar branches.

Whether millions of people are willing to ditch the stuffy old banks of yore in favor of a fledgling startup with little history remains to be seen. But part of me can’t help but think many will be hesitant to sign up for a bank account with a company that is legally registered in another country. Sure, you could say the same about Facebook or WhatsApp or a bunch of other technology companies, but I don’t think people ultimately care where the companies behind such apps are based. When it comes to an individual’s personal finances, “local” could prove important.

There are, of course, early adopters — people who see where the future’s going and dive in headfirst. They’ll be pleased to know that if Number26 was to get into difficulty, the German Deposit Protection Fund will protect each account for up to €100,000 ($100,000) — and this applies across the E.U.

“People used to read the news on paper, then online, then more and more on mobile,” said Tayenthal. “Obviously, people are still going to bank branches, and there are still people reading newspapers. But we all know where the trend is going. 10 years from now, more people will be reading it online and more people will reading it on their mobile. The same thing applies to the banking industry.”

A big red flag for me is companies that don’t have a clearly defined monetization strategy. This applies across all industries — be it an email client, messaging app, or whatever. If someone promises great things, but doesn’t want to charge me, that makes me wonder. I want to know up front how the company will make money, not in 12-18 months’ time. If the bank accounts are free, as they are at Number26, how will the company make money from me?

“We and our investors are not overly concerned about making fees for now — we’re concerned about winning customers,” said Tayenthal. “We can prove that we can win customers at a fraction of the price that traditional banks do. Our overhead costs are a small fraction, and once you get a customer, and they trust you, you can also monetize.”

While the company isn’t announcing a specific plan yet, monetization strategies may include charging for products such as overdrafts, insurance, savings products, and so on.

There is also scope for other fintech tie-ups, surely? It would seem that Number26 and TransferWise are ripe for partnering with each other. And this could hint at what the bank of the future could look like — as the great unbundling has been happening over the past few years, Number26 plans to systematically “rebundle” and create tight-knit integrations with other startups that focus on one specific vertical. What this could effectively mean is that through your Number26 bank account, you could access TransferWise’s cost-cutting currency exchange service, or perhaps even a Robin Hood-style stock investment service.

“Our vision from the start has been to build Europe‘s first bank account for the smartphone,” added Number26 CEO and founder Valentin Stalf. “We see traditional banks as having failed to adapt to the demands of the digital generation. The response to Number26 has been fantastic and we‘re thrilled to expand to further markets.”