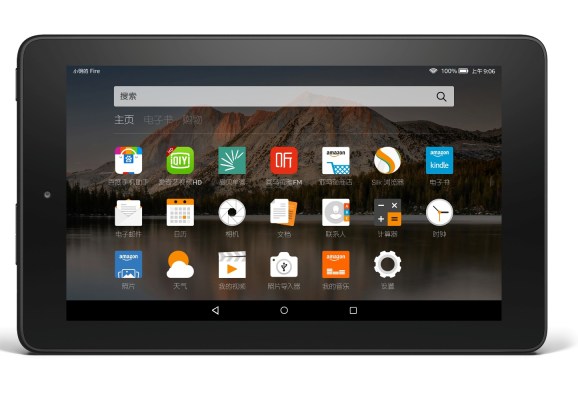 Amazon has announced that its recently launched Fire tablet is now available to buy in China.

Amazon introduced the $50 Fire tablet back in September, initially shipping only to the U.S., U.K., Germany, Japan, France, Italy, and Spain. The device sports a 7-inch display, 1.3GHZ quad-core processor, front- and rear-facing cameras, and 8GB of internal storage that can be expanded up to 128GB via microSD.

Amazon has previously launched Kindle readers and tablets in China, but the Internet giant said that its latest Fire device has been its fastest-telling tablet to date, so it will be interesting to see what kind of traction it garners in China. It will sell for RMB 499 Yuan, or roughly $80 USD.

Alongside this news, Amazon also announced a tie-up with local Internet giant Baidu, sometimes referred to as the Google of China, which will power search, apps, and online video for Fire tablets in China. No further details were given, but this sounds like part of Amazon’s strategy to gain a stronger foothold and mindshare in what can be a difficult market to crack. As Baidu is one of the country’s top technology firms — alongside the likes of Alibaba and Tencent — and one of the biggest search engines, with around 70 percent market share, this is a major deal that could go a ways toward cementing Amazon’s position in China.

“With millions of readers already using Kindle e-readers in China, we’re excited to now offer another incredibly affordable option, particularly for customers learning to read English,” said Neil Lindsay, VP of Amazon Devices. “With tools and features like Word Wise and Blue Shade, plus a large selection of Chinese and English content, we think readers will love the new Fire tablet.”

Just yesterday, Amazon revealed a handful of updates to its latest Fire tablet lineup, including a nighttime reading mode that minimizes the blue light emission that notoriously impacts your sleep.