In 2011, BlueStacks was a small company when it debuted its virtualization platform that enables people to play Android mobile apps on a PC. Now the company’s App Player has become surprisingly popular, with more than 109 million downloads of the BlueStacks player, which is used to engage with a billion apps per month. The Silicon Valley company announced those numbers and said today that it has launched its BlueStacks 2 platform with even better technology.

BlueStacks is now the seventh-largest distributor of Android. The growth says a lot about the popularity of Google’s Android operating system and its apps, which people want to play on devices such as TVs and PCs. But it also shows how popular Android games and communications apps have become in places such as China, where BlueStacks is popular

“This is equally surprising to us that the organic growth continues to happen,” said Rosen Sharma, the chief executive of BlueStacks in an interview with GamesBeat. “It is driven by the popularity of Android.”

In places such as China, players have begun playing “midcore” games on Android devices. But they also want to play those games, such as titles like Crossy Road (pictured above), on bigger screens such as laptops or desktop PCs, Sharma said. To do that, they download the free BlueStacks app player to a Windows PC or Mac. The player lets people run most of the millions of apps (about 96 percent of them) and games (86 percent) available on the Google Play Store — on their computer. It does this through virtualization software.

Games account for 40 percent of usage. Another 30 percent comes from messaging apps as it is much easier to type messages on a PC keyboard than it is on a mobile device. The remaining 30 percent of usage is attributed to all sorts of Android apps, Sharma said. 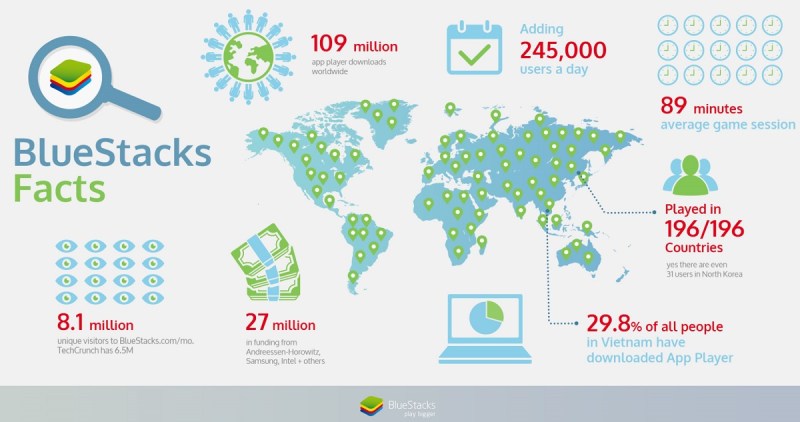 Above: BlueStacks has become extremely popular around the world.

Sharma, the former chief technology officer at McAfee, started BlueStacks in 2009. The company launched the App Player, an Android emulator on the PC, in 2011. It started making money via advertisements and later also made money via in-app purchases on its publishing platform.

“I’ve watched this company come up as Android has come up over the years,” said Tim Bajarin, an analyst and president of Creative Strategies. “Both have exceeded almost everyone’s expectations.”

“When we started, mobile apps, with their crisp resolution, looked and sounded gorgeous on PC and TV,” said BlueStacks product manager Shashi Kant Sharma in a statement. “What we’ve learned is that the wider visual space lends itself more naturally to app discovery. It’s accelerated our growth and retention massively over the past year. The average Bluestacks user spends 89 minutes playing on their first day. In addition, once someone discovers apps on PC or TV, they tend to use them across all of their devices, giving the BlueStacks platform powerful reach for developers.”

Sharma said that many hardcore PC gamers are using BlueStacks because they want to play midcore mobile games. These users spend a lot of money, which has attracted a lot of app developers to the BlueStacks platform. Overall, BlueStacks is adding 220,000 new users a day, more than double the rate of a year ago. The company’s website recently surpassed 8 million unique visitors a month.

Now the company is launching BlueStacks 2, a mobile-gaming platform that spans mobile, PC, and TV. BlueStacks 2 adds features for better gameplay and app discovery. It has a new browser-like user interface. When someone clicks on an ad, a new tab opens where people can view the ad later without interrupting gameplay. BlueStacks 2 can also run multiple apps in different tabs for the first time. Now many users are running messaging apps and games simultaneously.

BlueStacks now has 105 employees and has raised $30 million in funding from investors including Andreessen Horowitz, Intel, Qualcomm, and Samsung. 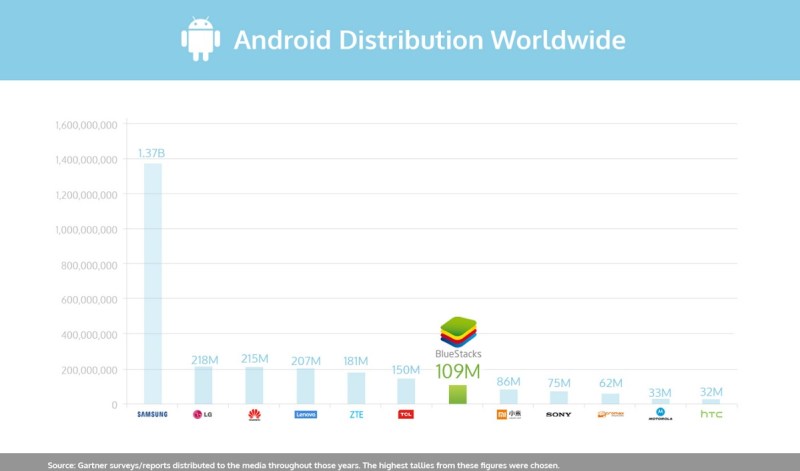 Above: BlueStacks is now the seventh-largest Android distributor.