Sega’s Creative Assembly has provided an in-depth preview of its campaign map for the Total War: Warhammer strategy game coming next spring. It’s one more sign that Creative Assembly is putting a huge amount of work into the details as it merges the lore of Warhammer’s fantasy universe with the massive army-based gameplay of the Total War series.

Campaign maps are usually not that big a deal in video games, but in Total War titles, they’re half the fun. I got a preview of the campaign map’s details and a hands-on preview of a battle during a visit to Sega’s San Francisco office. Al Bickham, the communications manager for the Creative Assembly studio in the United Kingdom, walked me through a tour of the map. The world that he showed off is so beautiful it could really draw in new fans — particularly Total War players like me — into the Warhammer fantasy universe.

The preview also showed me the wisdom of combining the epic Total War gameplay with a strong story, making for a game that could be very replayable and more accessible than past Total War games.

“We’re making the user interface more straightforward and more accessible,” Bickham said. “It’s an interesting fantasy universe even if you don’t know what Warhammer is.”

Total War: Warhammer is coming out on April 28, 2016, on the PC, and right now the title is still in its alpha stage. So the details are subject to change. But you can already see how the game blends the strategic gameplay on the level of armies moving across the campaign map with the tactical battles that take place on beautiful 3D landscapes where rival armies meet in combat.

The 3D campaign map focuses on the central part of the Old World of Warhammer Fantasy Battles from the decades-old Warhammer lore. In the south are the Southern Badlands and the Western Badlands occupied by the “Greenskins,” or the goblin race. There are Worlds Edge Mountains and the Grey Mountains, where the dwarves dwell. The central area is home to the Empire of Man (humans) and the Vampire Counts, and to the north are the regions of the Norse and the Chaos Wastes. All of the major races are playable, though the demo I saw focused on controlling the Greenskins. 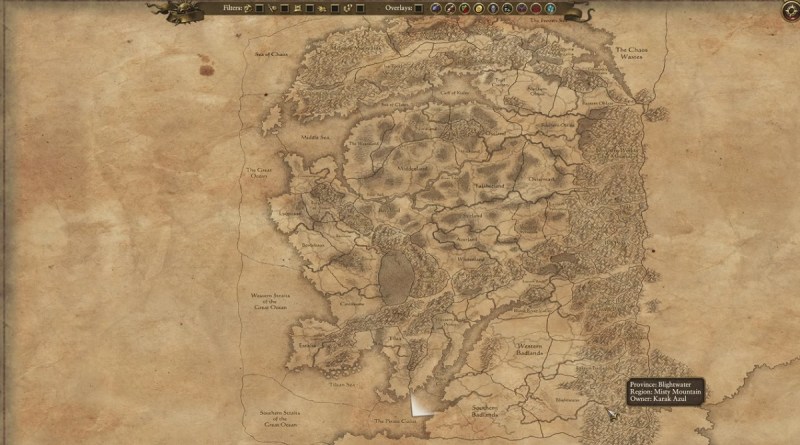 Above: An overview map of the Old World from the Warhammer Fantasy Battles series.

The world is really rich with details, but it’s dynamic. It’s a sandbox world where you can march your troops in any direction. It is by far the most interesting campaign map that I’ve ever seen in a Total War game. There are places like the Marshes of Madness, where magic is very powerful. In the fiction, the Greenskins have been trying to take the Dwarf strongholds for thousands of years.

Bickham showed how you could take a Greenskin leader, Muzg the Astute, and inspect his army of 20 Greenskin formations. Then you can click on a dwarven city, Karak Kadrin, to attack it. You can go into a battlefield mode and resolve the battle manually. I fought one of these epic battles with a dwarf army, underground, in real time. 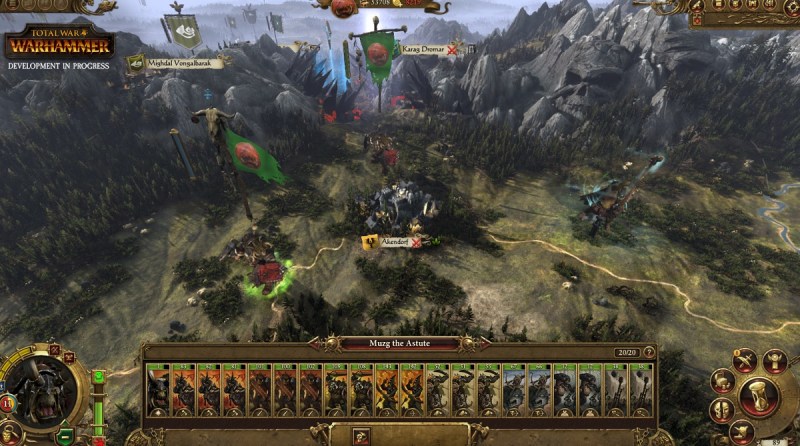 Above: A Dwarf kingdom in Total War: Warhammer.

I had about a dozen different companies of human soldiers under my command. My soldiers were a mix of infantry, with archers, artillery, and pikemen. The Greenskins attacked me from three different directions in an ambush. But they weren’t terribly smart about it as each force approached me one at a time. They came forward quickly and engaged my soldiers before I had much time to issue commands. I was quite worried about their superior numbers, but my soldiers were stout. They retreated a couple of times, but they held out and sent the Greenskins running after each attack.

But the Greenskins hit me with a special weapon: a giant spider. It started attacking my slow-moving artillery, and I couldn’t do much about it as it laid waste to my troops. I kept attacking it with everything I had from all directions and eventually brought it down. Then I went after the Greenskins and drove them off. I could zoom in on the troops or look at the action from above. 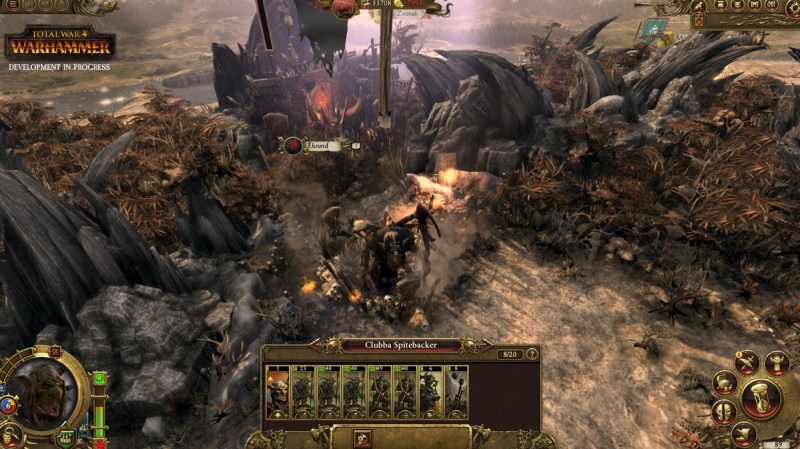 Above: The campaign map shows an army’s units in Total War: Warhammer.

If you don’t want to fight a tactical battle on the ground, you can skip it. In such a case, you can simply resolve the battle instantly on the campaign map. If the Greenskins win, they can take over the city and collect loot. You see how many soldiers you lost in the battle and how much damage you inflicted on the enemy. If the Greenskins take over three cities in a region, they can then control the region.

You can research different technologies to unlock new capabilities, construct buildings within the cities, and take over territory to gain more wealth and resources. You can go on quests that can take you through narrated stories within the universe, culminating in legendary battles such as the Battle of Black Fire Pass. If you complete a quest, you can get special rewards. 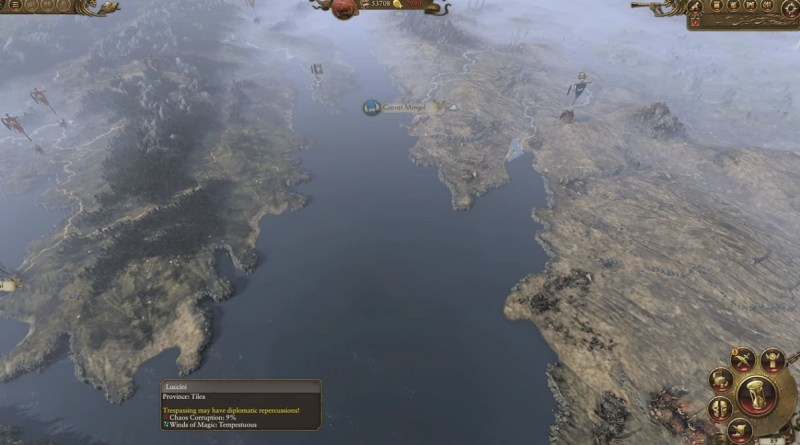 Above: This is what the detailed campaign map looks like in realistic 3D.

The campaign map is very elaborate, with much more work put into the animations of the cities and the characters who lead the armies. Each leader has a full stack of characteristics that you can level up as you fight. There are named characters from the epic Warhammer legends, like Azhag the Slaughterer. He has a lot of super powers and skills that exceed the abilities of other Greenskins.

The Greenskins are constantly measured on their “fightiness.” If they have to wait a long time between battles, they will get impatient and start fighting each other. You can set them to raiding, which means they will gather income and resources from the local region. That makes the goblins happier. A goblin shaman can cast spells that will enhance a goblin armies.

You can see different atmospheres around the regions as you move further north. The skies are cloudy, and the world is darker. You’ll be able to play any one of four races, each with some very different sets of skills and specialities. Goblin armies can build up over time to enable special units such as flying suicide bombers. 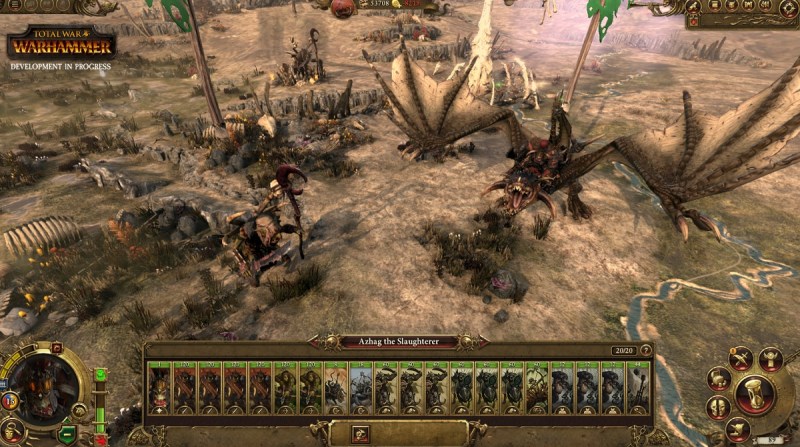 Above: A goblin army equipped with a dragon in Total War: Warhammer.

Ian Roxburgh, the game director at Creative Assembly, said in a statement, “We’ve gone to great pains to ensure we bring the hugely popular, lore-detailed world of Warhammer Fantasy Battles to life with the most detailed and graphically impressive campaign map we’ve created to date.”