Big Huge Games is launching a huge World War update to the DomiNations mobile strategy game today, enabling massive battles between two alliances where 50 players will be able to face off against 50 others in a Risk-like tourney for control of the world.

The title, developed by Big Huge Games and published by Nexon M, has generated more than 17.5 million downloads since it was originally launched in April 2015. The free World War update is the game’s biggest ever, and it is aimed at drawing old players back to the game, recruiting new ones, and rewarding hardcore players who have joined alliances.

DomiNations is the Civilization-style strategy game challenging players to lead their own civilization from the Stone Age to the Space Age. As one of eight nations, players can research, explore, gather resources, and complete strategic single-player and multiplayer conquests to grow their civilization. Of course, the fun part is to team up in alliances and, as you can now do more extensively in World War, crush your enemies.

The new multiplayer strategy mode match two alliances — or collections of 50 players in the same clan — of similar total capability. Then it lays out the players across a strategic map of the globe with red-versus-blue imagery, as you can see above.

“This World War mode was our most-requested feature,” said Tim Train, CEO of Big Huge Games, in an interview with GamesBeat. “We’re very excited to launch it and bring something entirely new to strategy games on mobile devices.”

Each World War takes two days. On the first day, each alliance makes a plan. You can arrange a War base that is separate from your actual home base in the game. The normal action in DomiNations combat takes place asynchronously, where one player attacks another who is offline. The same is true in the World War conflict.

Each player gets no more than two attacks against the enemy alliance. During prep day, an alliance works out among its own members who each member will attack on the other side. Also on plan day, alliance members can collaborate and conspire by scouting enemy bases, readying their defenses, and donating troops to one another.

Above: The World War update is aimed at rewarding hardcore players and their alliances in DomiNations with intense fun.

On the second day, players carry out the attacks asynchronously. When you attack, you can keep the loot you get, but as a defender, you never risk your own treasures earned elsewhere in the game. During the attack, you can get no more than five stars, depending on how well you do.

If you attack one side and get five stars, your alliance gains five stars in the overall war. The alliance that ends the second day with the most stars wins the World War. Players will be able to contribute to the overall massive war effort. Each member of the World War who makes a successful attack will earn bonus loot, with the winning side taking home the lion’s share.

Besides World War, the update brings new defensive units, a map editor, a war base, and more social features.

As part of the World War update, players will also be able to build the new Command Post defensive structure, maximize their base defense on-the-fly with the War Base and Map Editor, participate in global challenges with a new event system, and more.

While the map is pretty, it’s not a literal one-to-one representation of the battlefield. For instance, each player can attack any player in the world, not just neighbors on the map.

“World War is an intense two days of strategy and battle when you’re locked in a full-scale 50-on-50 war,” said John Robinson, general manager at Nexon M, in a statement. “In bringing competitive alliance-vs-alliance multiplayer to DomiNations, Big Huge Games gives every player the opportunity to gear up for war with their friends and fight for global supremacy.”

Train said that the game has done well in Asia, where Nexon has launched it in markets such as South Korea. It is currently hovering around No. 86 on the top-grossing list of app store games worldwide, according to market researcher App Annie. He said that Big Huge Games is 100 percent focused on improving DomiNations over time. 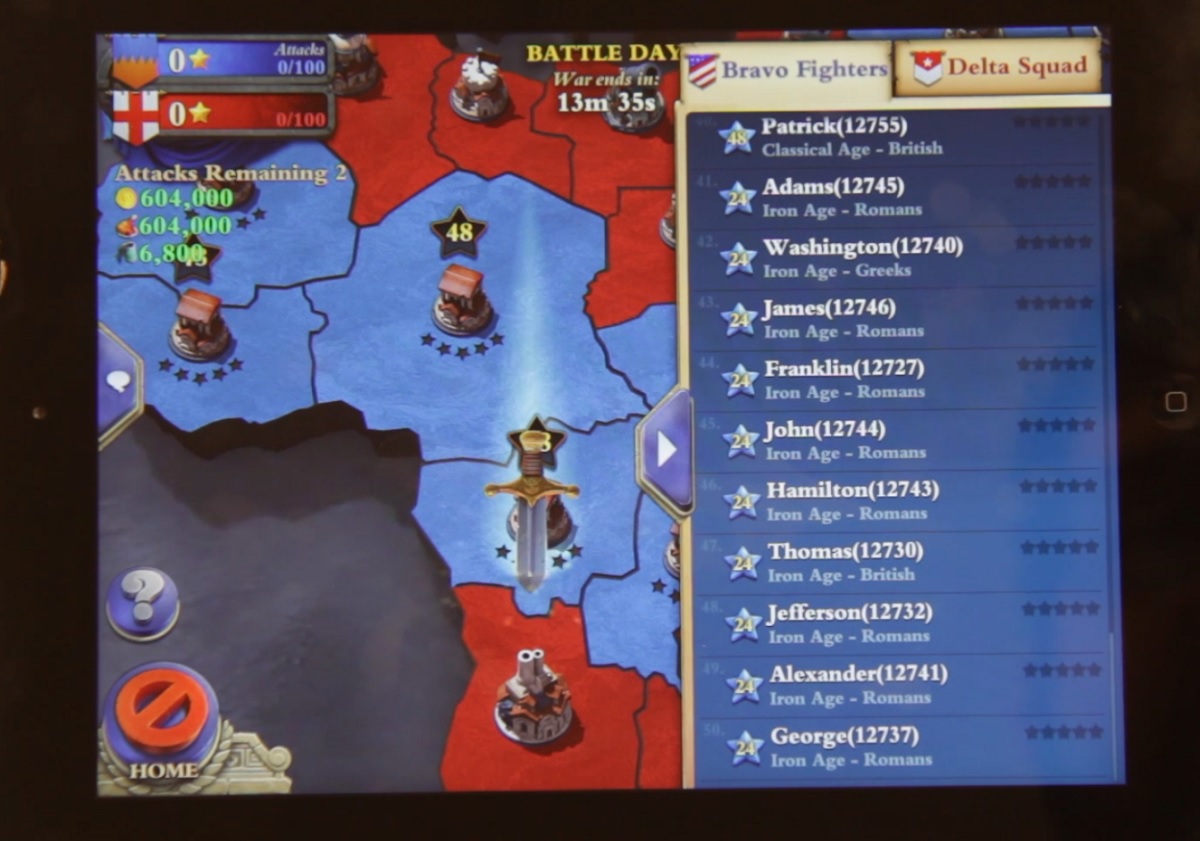 Above: You can inspect the enemy players to see which is worth attacking in DomiNations World War.