The newest Far Cry game is basically Ubisoft’s homage to the ’80s fantasy flick The Beastmaster.

The developer took the open-world mayhem of its Far Cry series thousands of years into the past with Far Cry Primal (coming to PlayStation 4, Xbox One, and PC on February 23). Set in the Stone Age, Far Cry Primal replaces the usual gun-toting humans with tribesmen and animals like saber-tooth tigers and giant woolly mammoths. You play as Takkar, a member of the Wenja tribe and the last survivor of his hunting party.

Takkar can tame animals and make them fight by his side as his companions. He can order them to attack humans and other wild beasts as he collects precious resources like plants, meat, and animal skins.

I played an early version of Far Cry Primal at a recent press event in Los Angeles. Although I only had an hour to play, I grew really fond of my pets, especially with my trusty brown bear. Let’s call him Fozzie.

Fozzie and I traveled to hell and back as we explored the unforgiving land of Oros. He had my back and I (mostly) had his. 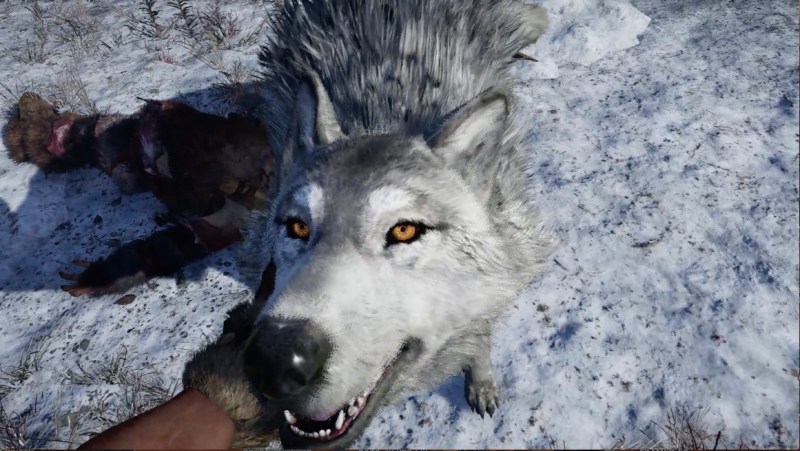 Above: Your animals need some love.

The demo already had a few tamed animals available, so when I started playing, I dismissed my default wolf companion and met the bear that’d become my friend and protector (you can swap friendly animals at any time via a menu). He was a big guy, and he had thick fur that made him fun to pet — Takkar’s burly hands vigorously rubs the bear’s cheeks as if to say “good job!”

One of the first things we did was swim across a serene-looking river … but we soon learned that it was the home of the piranha-like bitefish. The bestiary helpfully described them as “fish who bite.”

After escaping from their hungry maws, we reached the shore on the other side and came across a saber-tooth tiger. I attempted to tame it by throwing a piece of meat to the ground. When an animal takes the bait, you’re supposed to hold down a button to tame it. But I approached the saber-tooth way too early, and despite Fozzie’s tenacious attacks, it killed us both.

When I came back to life, I ran back to that same area and ordered Fozzie to attack the tiger while I threw spears at it from afar. It worked! As Fozzie stood on his hind legs to celebrate, I skinned our prey and harvested its meat.

I turned my attention back across the river to a place where, according to my map, was an enemy outpost. For a brief moment, I left both Takkar and Fozzie as I took control of Takkar’s owl. 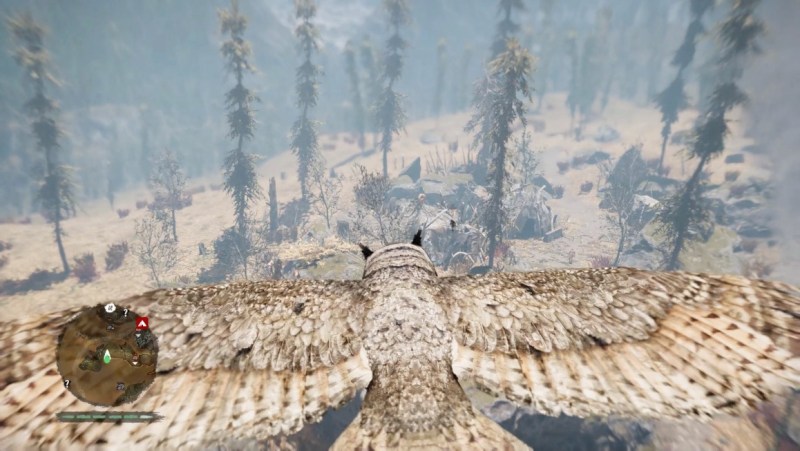 Above: The owl can help you plan your missions.

Unlike the other animal companions, the owl has its own dedicated button on the controller. You can use the bird to scout ahead and tag enemies. In this case, I used it to mark members of the hostile Udam tribe occupying the outpost. They don’t like Takkar and his people, so they’ll attack you on sight.

When I was back in control of Takkar, Fozzie and I went over to greet them with sharp spears and teeth. Fozzie automatically ran to the center of the compound to attack a group of people while I stabbed some pesky archers in the throat. Once again, we were victorious. Clearing the outpost increased the size of the Wenja population: Takkar’s people quickly took it over once the Udam were gone.

My bear was badly wounded in battle, but after feeding him some meat, he was ready to move. Companions can’t die. If they lose all their health, they’ll just be stunned until you feed them.

Fozzie and I made an excellent team. Throughout the rest of our adventure, we hunted yaks, found secret cave paintings, and saved Wenja members from captivity. We also learned the true power of a woolly mammoth. 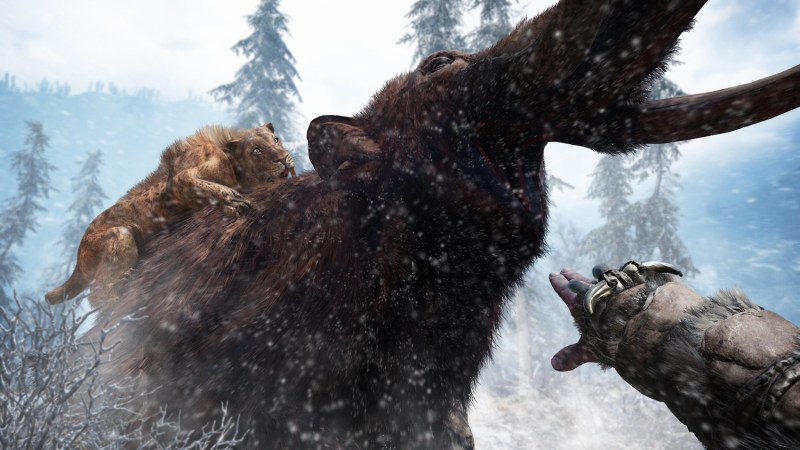 Above: Don’t mess with the wooly mammoth.

The woolly mammoths were the biggest animals I saw in the demo. They were generally peaceful and traveled in small packs of two or three. But if you bother them, you better start running.

Just for fun, I attacked one of the mammoths with my long bow while Fozzie tried to claw it to death. That was a horrible idea. The other mammoths in the area worked themselves into a frenzy. One of them quickly took down Fozzie with its large tusks and then sent me flying into the river. It kept attacking me until I died.

Unfortunately, you can’t tame a mammoth. But you can ride it if Takkar has the Mammoth Rider skill (the demo already had that unlocked). So the next time around, I left Fozzie behind and climbed up the hairy mammal. Human enemies ran away scared yelling “Mammoth! Mammoth!” whenever I charged at them. I crushed their bodies underneath the animal’s heavy feet and threw others off a cliff with its trunk. It was awesome.

However, the mammoths are still a bit temperamental even after you ride them. After getting off my first mammoth, it joined two of its brothers to gang-up on poor Fozzie when the bear returned. I guess they were jealous. Either way, I didn’t want to die again, so I just watched until they lost their interest in Fozzie and moved on. Sorry, buddy. 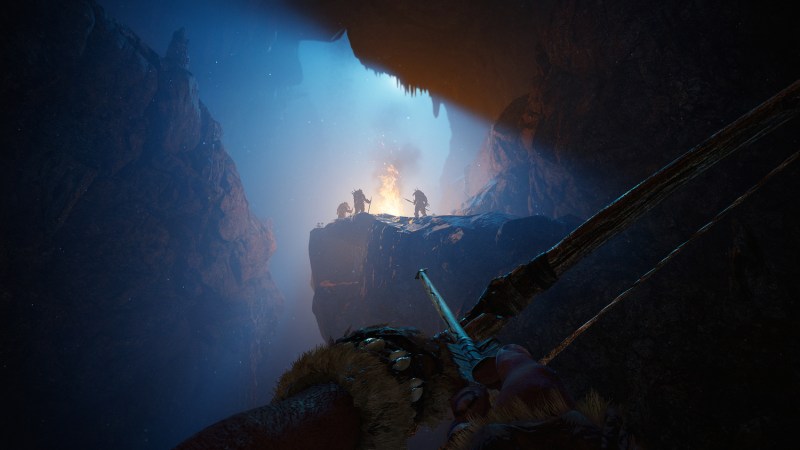 Above: Just one of the many caves in Oros.

Far Cry Primal will let you tame a bunch of animals, including badgers, cave lions, and jaguars. But unless one of them turns out to be cooler than my bear, I think I’ve already made my choice.