Games are wonderful because they are problems that you can really solve. Unlike life, where every solution creates new problems, you can find the “right” answer to most things in games. But that also means that the harder the problem, the more satisfying a solution. And that’s why the Picross series is so much fun.

Earlier today, Nintendo released Pokémon Picross for 3DS as a “free to start” downloadable game. This is the publisher’s latest take on the classic “picture crossword” series. The gameplay is simple. You must use the number arrays along the outside edges of what looks like a sudoku box to determine which boxes should remain empty and which you should color in. Once you complete the puzzle, the results should produce a blocky picture. In the case of Pokémon Picross, every puzzle will end up looking like something from the pocket monster games.

But this isn’t just a coloring book for logic lovers. Nintendo has incorporated Pokémon in numerous ways. For example, as you catch one of the creatures (by finishing their puzzle), you can use them and their powers to help make future puzzles easier. And as you collect more and more powerful monsters, you’ll have a better chance of finishing the expert-difficulty challenges and catching legendary Pokémon.

When I first booted it up, it was with the hope that I was about to get a gaming version of peanut butter and chocolate. But I came away thinking that it was a lot more like Oreos and nacho cheese — I guess some people really like that combination of flavors, but for me, each taste kinda ruins the other.

Let’s get this out of the way. Picross is awesome.

It’s a hard game to explain. I mean, I’m sure you get what I mean when I say you have to fill in boxes to make a picture, but it’s much harder to understand why that is so difficult. But let me try. 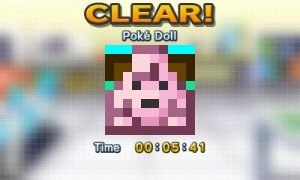 Above: One of the early, easy puzzles.

At its most difficult, Picross gives you almost nothing to get started on. You have a vague idea of which boxes have to get colored in, but that’s almost as good as nothing at all. The exquisite joy of Picross is then slowly building on top of that nothing by using one flash of logic at a time. The thrill is also knowing that if you make one mistake, you could potentially break the entire puzzle. In that case, you almost always have to start over.

That balance between logical joy and thrilling fear is satisfying beyond words. Yes, you get the picture at the end. But that image is just a representation of your struggle. It’s the evidence that you put your brain through the ringer and came out the other end. It’s proof that you’re smarter than the game.

This is the latest entry in Nintendo’s “free to start” series of games. This means, like mobile games, it is free to download but you have the opportunity to spend money.

Thankfully, however, the game does not overdo things. Yes, you do have an energy meter, and you can’t play any new puzzles once it drains unless you wait a few hours or spend in-game currency (which you can buy with real money) to recharge it. But you can also upgrade your meter, and Nintendo makes it very clear with red text that this is not an endless money sink.

“Energy will be unlimited after its final upgrade,” the game tells you.

Basically, this means that after you spend around $20 to upgrade your energy timer, you’ll have full access to all the puzzles without constrain. That’s a fair deal.

Pokémon Picross makes some missteps in trying to combine these two ideas into one, but it works in at least one regard: I enjoyed the overarching “gotta catch ’em all” through line that ties all the puzzles together.

In other Picross games, you’d get pictures of random, generic vehicles and animals. That never really bothered me because it’s not like I was planning to hang the images on my wall. But here, knowing that not only will I get a picture of Oddish, but I’ll also get to collect him and use him makes me feel a bit more compelled to push through the game.

And the Pokémon you catch are definitely useful.

They each have their own special attacks and powers that you can use on puzzles. This will make puzzles easier to solve by filling boxes for you or by telling you when you do something wrong. The more difficult the puzzle, the more powerful a team of Pokémon you will need.

These more direct uses of Pokémon didn’t jive with me, but you can at least ignore them if you want. And even then, it’s still fun to feel like you’re playing a Pokémon game while solving Picross puzzles.

While I like the metagame of Pokémon, I also feel like the introduction of powers breaks the beauty of Picross.

In the early game, simple puzzles mean that you never have to use powers if you don’t want to. If you do, an easy challenge will turn into a laughable one. When I did that, I wondered why the hell I was even playing a Picross game at all.

As I said, you can ignore the Pokémon. The game will ask you at the start of each level if you want to use active powers, but you can decline. That’s the worst thing that happens on basic puzzles — menus get between you and the real game.

But things get a little bit more insidious when you take on some of the more challenging levels. Check this one out for example:

Feeling like I did something wrong to get to this point… pic.twitter.com/iW3yJ9pcCQ

This is one of the early legendary Pokémon puzzles (which I did mess up), and the game makes it clear that you’re supposed to use your team of monsters to help “weaken” this one to make it easier to “capture.” That means I’m supposed to use abilities to fill in boxes, to tell me when I’m screwing up, and to help me out with other powerups.

But that is not how I want to play Picross. What’s worse, however, is that I can’t tell if that’s how I’m supposed to play this level. It’s possible that I have to use Pokémon to beat this stage — meaning it’s impossible to do so using only logic. The fact that I have this doubt in my head at all is a problem.

You play games because you know that the problems they pose have a solution. When I lose that faith, then I might as well get back to work on my personal finances and human relationships. Those are messy with no clear solution as well, and they actually mean something.

This isn’t the best Picross game. The original Picross for DS is still better. Picross 3D (also for the DS), which has you solving logic puzzles in three dimensions, is way better.

But this is still a fine game. And, if you enjoy Picross but don’t put it on a pedestal like I do, you may find some more enjoyment from the Pokémon elements than I did.

At the very least, I happily recommend that everyone with a 3DS give it a shot. It’s free to download, and you’ll get an idea of whether you dig it long before you’ll feel any pressure to spend money.

Nintendo provided us with a download code of Pokémon Picross for the purpose of this review. In exchange, we agreed to not publish our critique until December 3 at 9 a.m. Pacific time. The game is available now on 3DS.