Bill Holt is one of the men who keeps Moore’s Law going. The Intel tech and manufacturing executive has done that for 42 years, and tonight his peers honored him for that.

At a dinner in San Jose, California, attended by 400 of his peers, Holt received the Robert N. Noyce award (named after Intel’s founder) for his contributions to the chip industry, which has become a $335 billion industry, according to the Semiconductor Industry Association (SIA).

Moore’s Law, first put forth by Intel chairman emeritus Gordon Moore in 1965, predicts that the number of transistors on a chip will double every couple of years. In the 50 years since that prediction, the law has pretty much held true, and it has led to huge innovations in modern electronics. 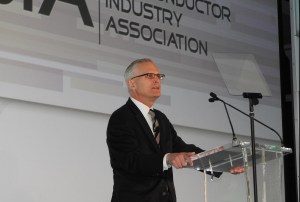 Above: John Neuffer, CEO of the Semiconductor Industry Association.

The chip industry is the “heart and soul of the U.S. economy,” said John Neuffer, president and CEO of the SIA. A million jobs in electronics are built on the foundation of chips, the brains of everything electronic. But Moore’s Law isn’t a foregone conclusion. It requires a lot of hard work.

That’s a heavy responsibility to fall on one person’s shoulders. And certainly, Holt gets a lot of help. In his acceptance speech, Holt thanked his family and joked that he is “pretty lazy,” and that he wouldn’t have moved forward without colleagues constantly prodding him.

“When you look backwards, things always look easier than when you were looking forward,” he said.

Intel has tens of thousands of chip factory workers who “make this possible, and we get the opportunity to guide them,” Holt said.

“There is no other kind of industry that delivers the kind of efficiency, innovation, and cost savings that this industry creates every day,” Holt said.

Peter Cleveland, vice president and director of global public policy at Intel, said that the “keeper of the flame of Moore’s Law has been Bill Holt.”

Brian Krzanich, current CEO of Intel, said it gratified him to give an award to someone who was so close to him.

“He and the people he leads have been responsible for driving forward Moore’s Law and reinventing computing every couple of years,” Krzanich said. 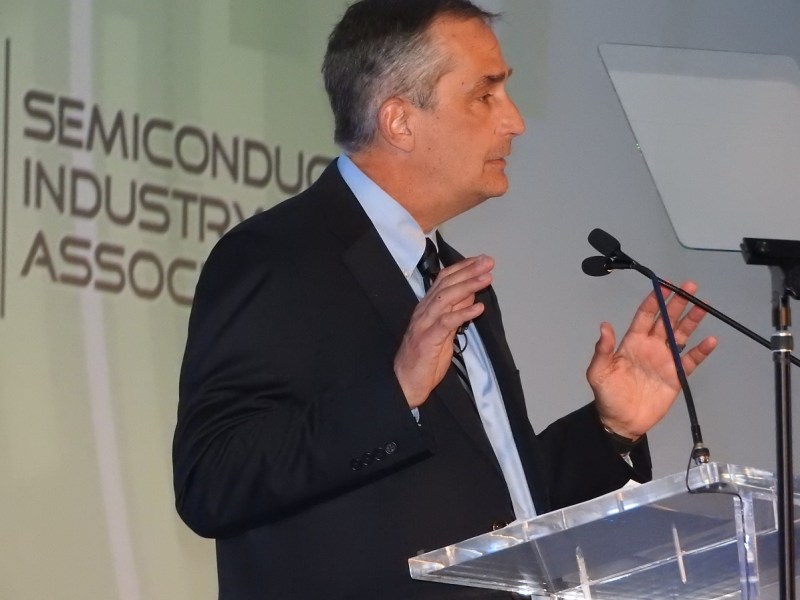 Above: Brian Krzanich, CEO of Intel.

“You can’t have a career like that without leaving an indelible mark,” Krzanich said.

Holt said, “This is a tremendous honor. As I look back on the people who have received this award in the past it’s humbling. It’s hard to accept I am here tonight. But I am remarkably fortunate.”

“I am confident when we have someone else standing here ten years from now,” he said, “they will say it was pretty hard. But I’m confident they will do it.”

Noyce, the former CEO of Intel for whom the award was named, was known as a statesman of the chip industry, and he once said, “Don’t be encumbered by the past. Go out and do something wonderful.”

As his conclusion, Holt noted, “I would just add to that. Go out and do something wonderful. Don’t be afraid to fail.” 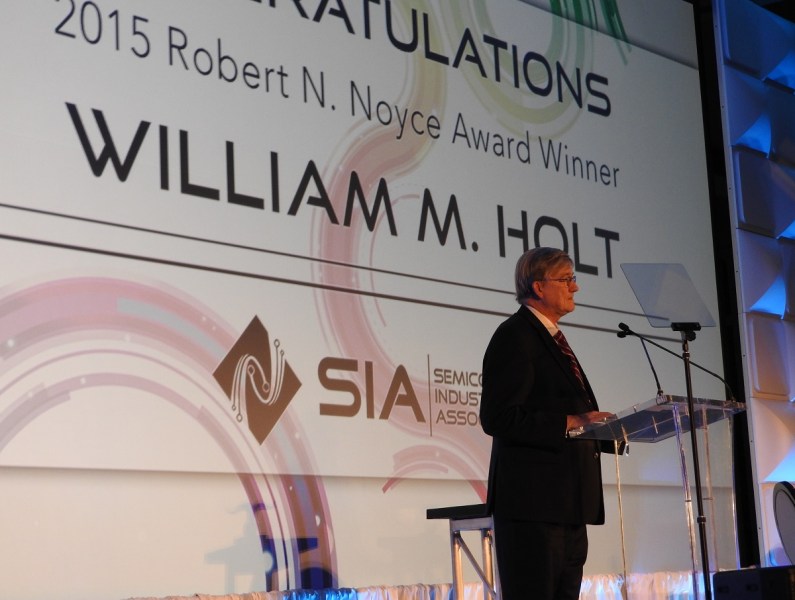 Above: Bill Holt, recipient of the Robert N. Noyce award for 2015, at the SIA dinner.