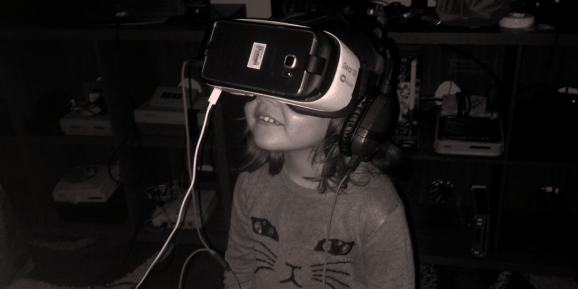 Professionals in the game and tech industry make tough creative and financial decisions every day. But the scope of those problems are nothing compared to making the right parenting decisions.

I’m the father of a 5-year-old girl, Sakura, and there are a lot of things about her life that worry me. Sexual education, discussing drugs, how to interact with other human beings — all of these things are milestones that I have to help her with, as best I can, as they come. Not very high on the list, however, is how she will deal with a future filled with virtual reality. I thought maybe today was the day to tackle that small issue.

With some uncertainty on whether I was about to do the right thing, I decided that if Sakura was good that day, she could try out virtual reality. I still had the Samsung Gear VR sitting in my game room, and she seemed pretty curious about it ever since I brought it home. I figured she would need to be introduced to virtual reality at some point, so why not now?

I should mention that I’ve given Sakura a pretty low-tech upbringing. Well, it’s low tech when compared to a lot of parents I know and see in the Bay Area. She doesn’t own a functioning smart phone and the closest thing to a tablet that she gets her hands on is a LeapPad. She is not completely tech illiterate, in that she knows the basics. Like that the people on television don’t actually live inside of the box. She also knows that although the concept of how this stuff works is complex to grasp in its entirety, it’s not all sorcery and magic. Especially since she sees her dad working on this stuff all the time.

What I hoped for with this experiment was to see my little girl awestruck as she interacted with a virtual dinosaur. Perhaps take the first steps towards being comfortable with a medium that may wind up dominating her life. What actually happened, though, is that I may need to buy some child therapy sessions.

Stephen: Do you know what this is?

Sakura: Yeah! It’s the VR thing you use for work! Is that the surprise you promised me this morning?!? [She rubs her hands together and begins bouncing at the knees.]

Stephen: Maybe … do you want to try it?

Stephen: Ok! Give me a few minutes to set this up.

I begin adjusting the straps on the Samsung Gear VR. Sakura gets her face close to the unit in my hand, inspecting the details.

Sakura: So this is just something I put on my head, right? And it puts the phone screen really close to my eyes?

[Sakura giggles, it seems partially out of pride for sussing out how the device works, with a tinge of nervous excitement. I place the Samsung Gear VR over her face to get the straps just right.]

Sakura: Is this VR?

Stephen: Not yet, darling. Hold on. I’m getting there.

[I pull the Samsung Gear VR off her head, plug in the Samsung Galaxy S6 Edge+, and hold the unit up to my eyes with one hand. I navigate the user interface and load up the Jurassic World experience, so that all I have to do is tap the button on the side of the unit to start the app.

I then place the headset carefully onto Sakura’s head and do a final adjustment of the straps. She let’s out another nervous giggle. I place the headphones on next.]

Stephen: Are you ready?

[I tap the button on the side of the unit and Sakura is staring straight at me, with her mouth wide open.]

Sakura: Trees. Sky … this is so beautiful!

Stephen: Do you see a dinosaur? 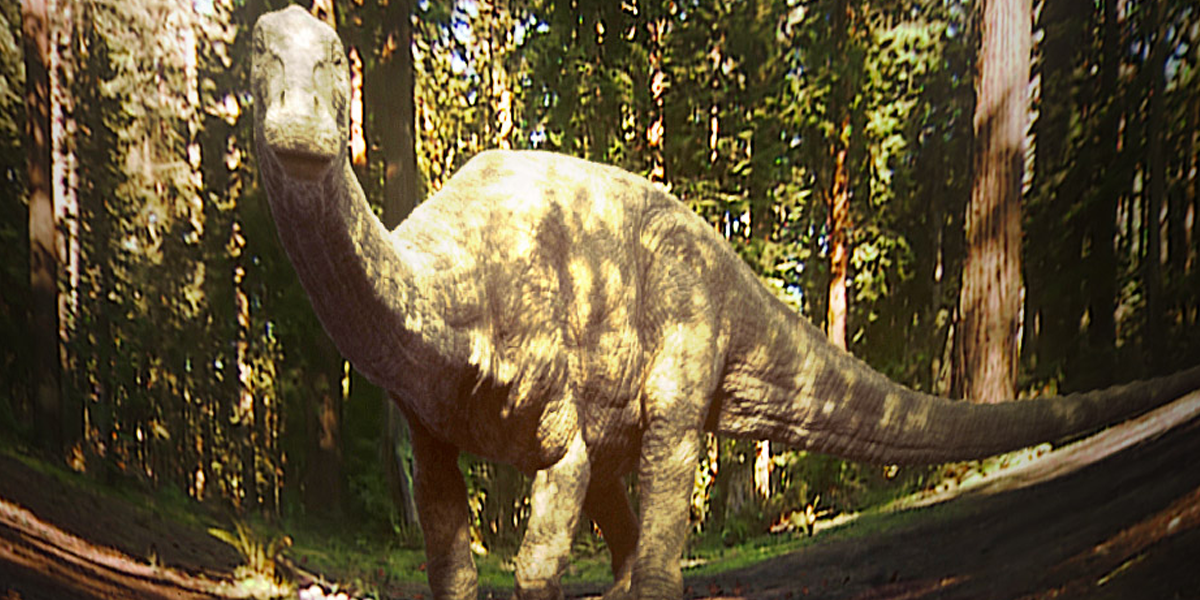 [At this point, I sense something is wrong. She should’ve seen a dinosaur by now. Why is she is fascinated by the trees?]

Stephen: Try looking all around you. Move your head.

[Sakura cautiously turns her head and begins to move her little body around. Then suddenly a burst of panic energy hits the room, as she suddenly leaps in terror and lets out a scream.]

Sakura: Get away! Get off of me! Get away from me! Stop! Stop! [I reach out to grab her, but she quickly jolts backward and away from my reach, throwing her hands up trying to shove back something that isn’t there. Luckily, my wife is standing right where she’s recoiling and quickly grabs her. I catch up and fling the headset off. Sakura is near tears.] Mommy! There was a dinosaur!

Sakura: I think so. [I feel like a gigantic dick.] Where were you guys?

Stephen: We were here the whole time.

Sakura: … but were you guys there with me?

Stephen: Yes … and no. We were here in the real world, keeping you safe the entire time.

[My wife shoots me a dirty look]

Stephen: So, what did you think?

Stephen: But the dinosaur was friendly.

Sakura: He was right here! [Sakura points to her cheek.] He was touching me!

Stephen: You mean he was right up next to your face?

[Her mother and I exchange worried looks. I don’t like strangers violating my space. I certainly don’t like the idea of someone invading my daughter’s comfort zone in the real world. This brings up a lot of questions about space in the virtual one. I feel like I may have really screwed up here and allowed her comfort zone to be violated right off the bat.

It took me until now, writing this article, to realize where I had screwed up on the Jurassic Park experience. I was sitting on a couch, while my daughter faced me. When I loaded the Jurassic Park experience, the viewport was likely calibrated for the direction I was facing, which puts the dinosaur right in front of the viewer. It lays sleeping, and then slowly wakes up and approaches the viewer. It gets very close, but it’s a build up. When Sakura turned, she likely first clocked the creature when it was right on top of her.

We take a break and I contemplate dropping the entire idea. I begin putting the Samsung Gear VR box together to repack the unit. Sakura wanders into the door jamb of the game room, and I notice she is staring at the Samsung Gear VR.]

Stephen: Do you want to try something else?

[She keeps staring at the unit. I keep opening the box to put it away.]

Stephen: There won’t be any dinosaurs this time.

Stephen: What about a circus?

[Her eyes widen. I stop packing.]

[She creeps out of the door jamb and into the room.]

[Sakura stares at the Samsung Gear VR in silence for a few moments, pondering the situation.] I load up the Cirque Du Soleil experience from the Samsung VR library. It features a group of performers gathering on a stage around the viewer, while the group watches two acrobats twirling high into the air on what looks like two long straps.

[Sakura begins staring blankly, then begins looking up and around.]

[She keeps looking up, and turning, until finally, she’s back to looking level again.]

[I begin to pull the headset off of her.]

Stephen: What did you think of that one?

Sakura: It was nice.

Sakura: It didn’t have dinosaurs.

Sakura: It was nice.

[I get the feeling she isn’t into this. So I begin putting the Samsung Gear VR away, again.]

[She grabs my arm holding the Samsung Gear VR and looks down at the goggles.]

Sakura: Is there another one I can try?

Sakura: But no dinosaurs.

[I place the Samsung Gear VR back up to my face and navigate the library. What’s left is a zombie experience, an Avengers promo, and a really trippy and colorful music video experience from SquarePusher called Stor Eiglos.

The zombie experience is definitely out. I mention Avengers, but my wife is convinced Sakura will freak out again from that one. I could search the store and try to find something else, but it’s getting late, and everyone has to get up early the next morning. So I go with Stor Eiglos .

Stor Eiglos is a colorful, animated 360-degree music video, with an art direction that is bright and surreal. I’m not entirely sure how she’ll take to this, but it shouldn’t be fear.

I load it up, then strap the Samsung Gear VR to Sakura’s head. I push the button, and off she goes.] 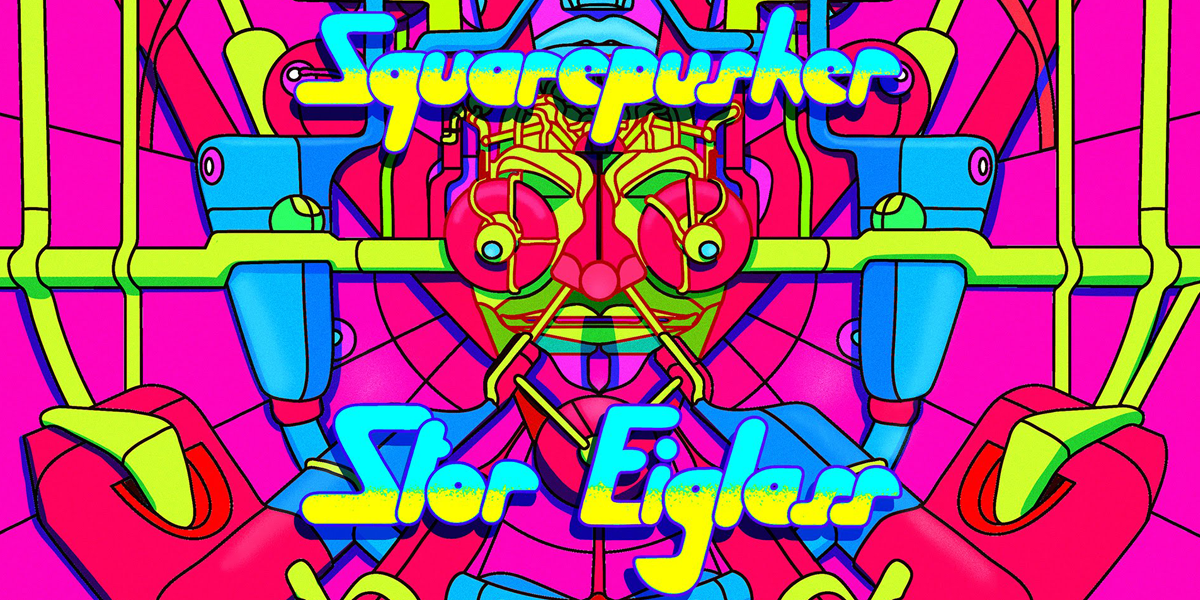 [She says it like a really bad impression of someone smoking a joint on TV in the ’70s and ’80s. Except she has no point of reference to make that sort of joke. So the reaction is genuine, and it’s a little frightening.]

[Sakura’s body begins swaying, like she’s about to lose her balance. Unlike the Jurassic Park incident, I put my arm around Sakura’s body so she can’t get away, but I try to make sure not to touch her either.

I’m not sure what sort of reaction touching her in this stage of the experience will have. Probably nothing, but I’m also dealing with a young mind’s first virtual reality experience. So I’d rather not accidentally jar her out of it.

Her lower facial expression gives the impression she is in another space and time. My parental paranoia begins to kick in, and I start to question what I am doing to her. What if her little brain can’t handle being exposed to something this intense? Maybe she is way too young to try this? I know this particular experience is really colorful. What if I’ve ruined color for her forever? Will she have seizures? Am I going to be driving her to the emergency room in a few minutes?

Then suddenly, her body snaps to attention and she starts looking around.]

Sakura: I think it’s done! All I see are words in a room.

[I sigh in relief that she is still conscious and take the headset off.]

Stephen: What did you think of that one?

Sakura: It was so colorful!

Sakura: Yes! Is there another one?

[Obviously, the reaction to virtual reality is going to be different for each person. But when dealing with a child, you should consider a number of factors. Some are obvious, such as don’t just throw them into a haunted house simulator, but I didn’t even think about some others until I used my own daughter as a guinea pig.

The most troubling aspect was Jurassic World. I don’t think the dinosaur, in and of itself, was the primary source of a freak out. It was the fact that it got into her perceived personal space (almost immediately, again, because of my screw up). She was convinced that it was touching her, and that in itself presents an uncomfortable breach of the fourth wall that we may not fully understand right now. We definitely haven’t had a medium, outside of live theater, that has been capable of this. How close is too close? What touch is a wrong touch? These are things we can barely work out in a real world environment. How will we be able to figure this out for entertainment purposes?

Sakura begins hopping and staring at the headset, but I think this has been enough virtual reality for one night. There’s no need to over expose her in one sitting. Sakura has her entire life ahead of her to play around with virtual reality.]

Stephen: That’s it for now. If you’re good tomorrow, maybe we’ll try it out some more tomorrow night.

Sakura: OK! But no dinosaurs!