How many messaging apps do you have on your phone? Go on, take a look. We’ll wait…

Chances are, you might have Facebook Messenger, WhatsApp, Skype, and/or Viber, four of the most popular messaging apps currently on the market. But Yahoo wants to become a bigger player in this space, so the company has launched the next evolution of its Messaging app, designed to make the overall experience faster and more “modern.”

Jeff Bonforte, Yahoo’s senior vice president of communication products and engineering, said that users are looking for services that are quick and easy to use to connect with their friends, families, and colleagues. And while this latest iteration lacks the bells and whistles it might have needed to differentiate itself from the current popular apps, behind-the-scenes improvements in Yahoo Messenger may at least give it a chance of stacking up against those at the grown-up table. 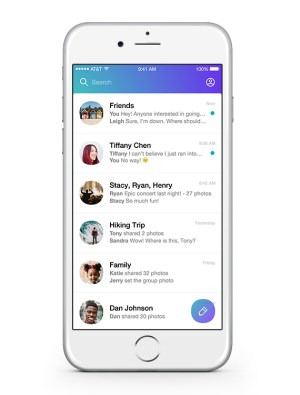 To say that Yahoo has its work cut out for it is an understatement. Facebook owns two of the most popular apps in the space, with Facebook Messenger at 600 million monthly active users and WhatsApp at 700 million. Yahoo hasn’t disclosed its user counts, but did suggest to us that the number was in the tens of millions. So what chance does it have? Bonforte seems to think that, while it may not offer things like Voice Over IP calls or video chat, consumers will value the improved infrastructure and technology.

The new Yahoo Messenger features technology that the company brought over thanks to multiple acquisitions. It has integrated work from not only Flickr, but also Tumblr, Xobni, Cooliris, and Tomfoolery.

The service does exactly what you’d expect it to do, but it has updated those basics. Yahoo has made it so that photos can be shared much more easily and at scale. Instead of being limited to uploading images one by one, users can select dozens or even hundreds of files to be uploaded simultaneously, which the company says won’t hinder performance. What’s more, while the thumbnail preview shows up in near real time and is about a 20th the size of the actual image, when you download it, you’ll get full resolution. It’s this capability, thanks to the use of Flickr’s platform, that could make consumers rethink Yahoo Messenger, and is something the company claims other messaging services can’t do. 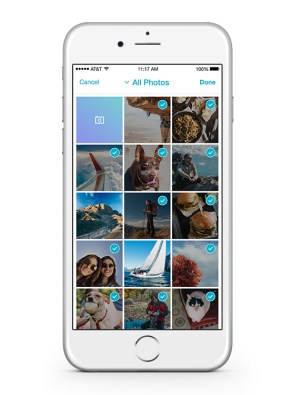 Yes, photo support has always been available in Yahoo Messenger, but the new upload process is pretty fast. In the demo that the company provided VentureBeat, it took perhaps a second between when the image was shared and when it appeared on another device.

Another feature users might find interesting is the capability to unsend anything they’ve posted on Messenger. The most obvious application of this is if you’ve revealed something embarrassing to your friend or in a group chat setting that you’d like to retract. Now it’s possible to delete missives “without any fanfare,” whether it’s a message, photo, or GIF, and regardless of how long ago you sent it, said Bonforte.

He remarked that today’s messaging services are either ephemeral or permanent. Thinking that users would like to have a choice about the lifespan of their messages, Yahoo added the unsend feature, which will remove content from every device that it appears on, not just your version of the app. 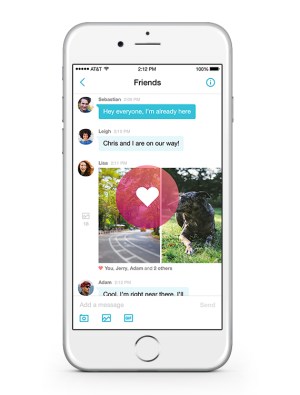 What would an instant messaging service be without animated GIFs? While you could simply go to a service like Giphy, download the file, and upload it to something like WhatsApp or Telegram, Yahoo Messenger has a more native approach, with perhaps one of the largest repositories of animated GIFs: Tumblr.

Austin Shoemaker, Yahoo’s senior director of product management, explained that users will have access to the latest GIFs posted on the social network in near real time — there won’t be humans sanitizing the selection, though there are basic safety filters to ensure that inappropriate GIFs don’t make it through. But if you want a GIF from last night’s Golden State Warriors basketball game, it’ll be there.

Yahoo Messenger will also allow you to show some love to the conversations you’re having by “Liking” something. Select a message, photo, or GIF and “heart” it, similar to what you can do with Twitter, Facebook, Slack, and others — no starring here.

Leveraging its Xobni acquisition, Yahoo has incorporated this smart contact system into Messenger. It understands the relationship between you and your contacts so it can make recommendations about who to add to a one-on-one conversation or a group chat.

Other improvements Yahoo has made include applying a scrolling mechanism that moves at 60 frames per second, meaning that you shouldn’t need to wait for the app to load new messages. It also has a process in place to help keep track of conversations when you’ve gone offline, voluntarily or not.

Shoemaker stated that the app will know when you’ve been suddenly dragged offline, and will avoid sending the same message multiple times, instead posting it once connection has been restored — in the right context, not at the bottom of the conversation. It also will mark the last message you’ve read so it can reference all those new comments that took place while you were offline. 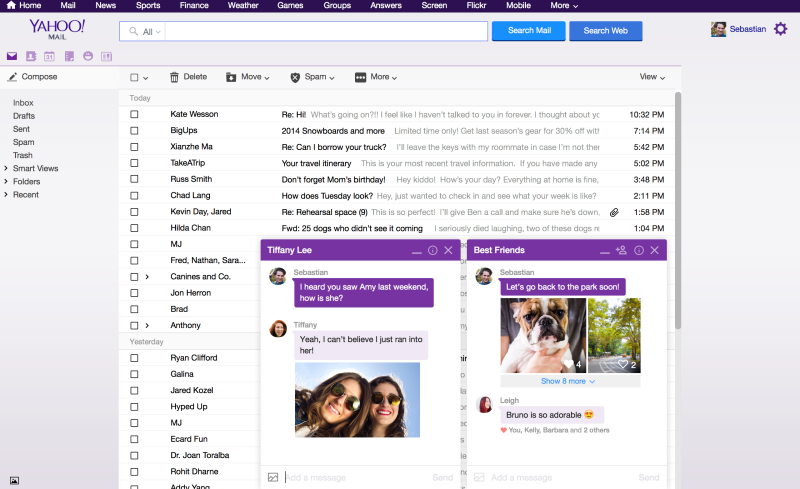 Above: Yahoo Messenger in Yahoo Mail

Admittedly, the aforementioned things may not sound all that revolutionary, but Yahoo promises that more features are on the way. Shoemaker told us that updates will come about every two weeks, so we might see more integrations with Flickr, voice technology, video (perhaps taking technology from Yahoo’s Livetext silent video chat app), and more.

So why should we be impressed by this new Messenger that on the surface lacks the substance to compete with the likes of Facebook, Skype, Google, and others? Bonforte told us that what distinguishes this offering is it’s able to disrupt what he calls “transactional issues”: quality and speed.

The Yahoo executive also thinks that this updated Messenger will be able to serve markets that aren’t readily targeted, like families, or groups that want to share photos or conversations while consuming as little bandwidth as possible.

It’s no surprise that Yahoo is putting more investment into its communication offering — chief executive Marissa Mayer hinted that something in the messaging space was being considered. But instead of building tools that people may flock to initially and then leave, the company is looking at building a solid foundation and taking it slow. “We want fewer tourists and more fanatics, [people] who are using the product all the time,” she said earlier this year.

You might think that the new Messenger is too little, too late, which is a perfectly valid argument. Instead of the bells and whistles, Yahoo has chosen to build on the core experience and make it seamless. It’s an interesting bet, that’s for sure, but what does the company have to lose?

The new Yahoo Messenger is available on iOS, Android, and also on the Web.