Update: Just two hours after we published this story, Facebook let us know that it has fixed the bug across the site, which was disclosed weeks ago. The original article is below.

Don’t worry, Mark Zuckerberg is still working at Facebook. The young CEO may be taking two months off, which we hope will start a paternity-leave revolution, but he’s definitely staying at the company.

And yet, a post on Facebook makes it look like he left. In fact, he apparently quit more than four years ago. The bug was discovered by security researcher Sachin Thakuri.

It’s actually a clever hack. Thakuri merely shortened the URL for Zuckerberg’s life event for starting at Facebook. The altered URL is simply missing “&ustart=1” at the end. The result is a Facebook post that looks completely legitimate but clearly isn’t: 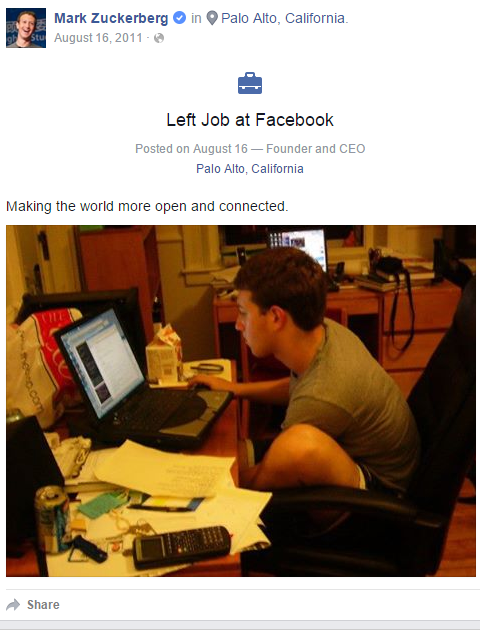 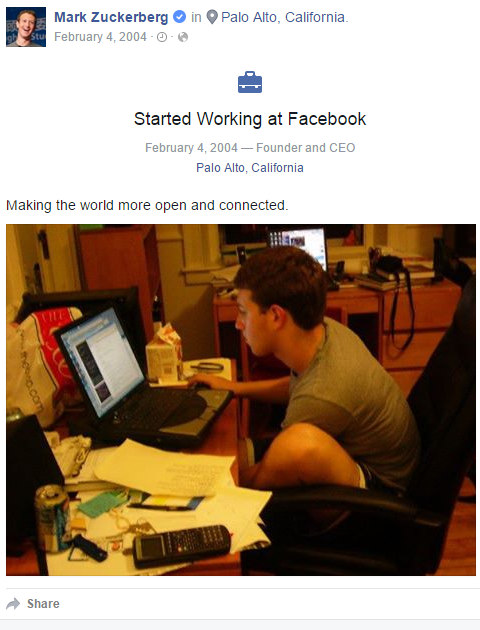 2011 was the year when Facebook introduced and launched Timeline. While the feature was first accessible to some in September, it’s not a stretch to presume Zuckerberg had access a month earlier, including the option to add life events.

In other words, August 16, 2011, was probably the date that Zuckerberg added a back-dated life event to mark the day he started working at Facebook. He, of course, started work on the social network before then, but February 4, 2004 is the day the service officially launched, and so that’s what Zuckerberg set for his life event.

As long as a given Facebook user has his work status published on Facebook, you can mess with it — but keep in mind that only backdated life events will get you a significantly different result. Aside from making Zuckerberg leave Facebook, there really aren’t that many life events that can be altered to make you do a double take.

Thakuri says Facebook told him the company won’t be squashing this bug. It’s not critical by any means, but it’s still an odd choice, given that it shouldn’t be too difficult to fix.