Three weeks on from BlizzCon, with a new Adventure Mode expansion and most of the details emerging for how Hearthstone’s renamed Championship Tour will work, a picture of how Hearthstone will evolve as an esport — both in-game and out — is starting to shape up.

In 2015, professional Hearthstone awarded players nearly $2 million dollars in prize money, with 22 major ($25,000-plus) tournaments taking place. Here’s a quick look at all of the things you need to know to keep up with pro Hearthstone in 2016.

Hearthstone has, at this point, a fairly consistent new content cycle that will affect the esports scene. For reference, here is a timetable of when updates have launched in previous years:

You can learn a bit more about what the new League of Explorers set is doing to the pro scene below, but it’s worth noting that if the cycle continues, Hearthstone is due for another major expansion set in spring 2016. The next expansion — presumably another 120-140 card set — will be the major factor in what players bring to next year’s World Championship. 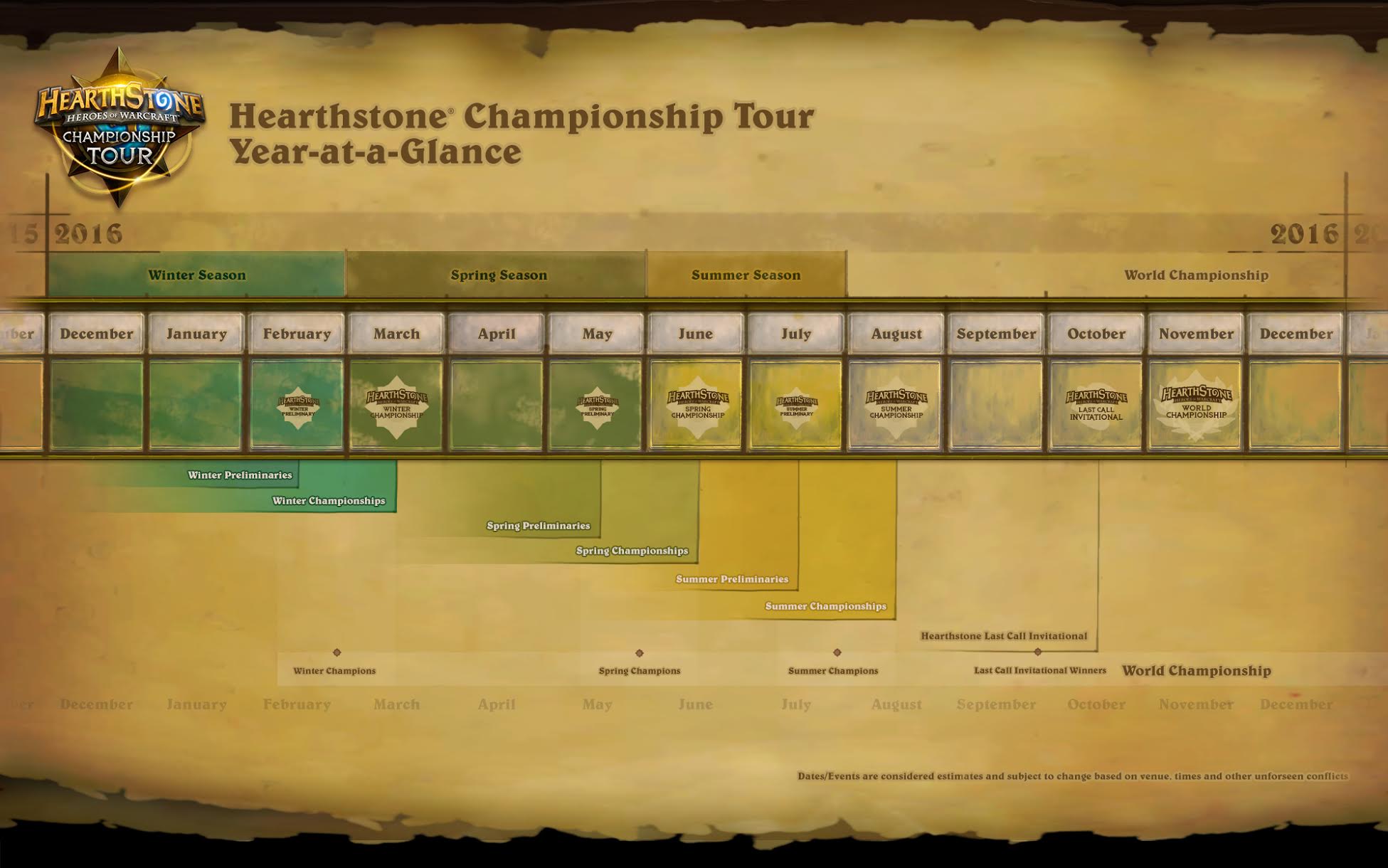 Above: The Hearthstone Championship Tour schedule.

Blizzard recently announced the particulars of the 2016 Hearthstone Championship Tour, a year of seasonal events across regions all over the world leading up to the World Championship in the fall. If you’re already following Hearthstone esports, here’s what you need to know for 2016:

More tournaments and the details for future Season Championship events will continue to be announced going into 2016. (For further discussion on the format, I had a lengthy conversation with my cohosts on episode 37 of our Hearthstone podcast, Well Met!)

The League of Explorers

Three quarters new League of Explorers content announced at BlizzCon is available to players now, with the remaining quarter opening next week. LoE introduced 45 new cards, and some of them have had immediate impact on the pro scene. The new mechanic, Discover, is a Battlecry-driven effect that lets the player choose one of three cards that meet the discovery criteria listed (and that is playable by the player’s class). The few Discover cards that are available right now, like Jeweled Scarab, have been popular — they help decks that have limited card draw keep going, since the discovered card doesn’t come from your deck, and they can ensure playable options when you might not otherwise have any. 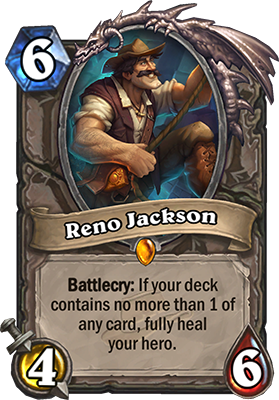 Above: Reno Jackson has been a meta-defining addition to Hearthstone.

Outside of decklists specifically designed to trigger Reno Jackson, you’ll see a lot of decks that continue to run core cards and make small changes here or there for new opportunities that the League of Explorers cards have enabled. Buff spell-heavy decks might substitute in a Djinni of Zephyrs, while powerful tempo plays like Unearthed Raptor or Keeper of Uldaman will appear consistently from this point out.

Each expansion has given rise to some new styles of play — Naxxramas really started the “sticky board” concept with a ton of powerful Deathrattle minions (such as Nerubian Egg), while Goblins vs. Gnomes pushed out a ton of powerful late-game minions (Dr. Boom), core spells (Muster for Battle, etc.), and the Mech synergies (Piloted Shredder, etc.) that are still popular today. Blackrock Mountain added some key tempo minions for certain classes (Flamewaker, etc.), as well as some new Dragon options that made Dragon-specific class decks playable; The Grand Tournament really doubled down on the midgame for most classes. Thus far, League of Explorers looks like it will favor control decks — the majority of its cards (Entomb, etc.) set up longer games (as does Discover as a mechanic).

With an emphasis on understanding the nuances of multiple tournament formats, deckbuilding will make a big breakthrough in 2016 — and the number of significant new playstyles opened up by Reno Jackson and other new cards will diversify the range of playable decks and options available for players to work with and plan against.

Another new expansion in about April should also turn the game on its head another time, especially if Blizzard continues with their trend of introducing new keywords. If not, both of the previous major expansions have introduced 20 or so core cards that became routine parts of either a particular class, or simply phenomenal neutral minions that changed the meta landscape.

In 2015, some $2 million dollars in total prizes went out to pro players in Hearthstone, with approximately $350,000 of that from Blizzard directly (and the balance coming from OnGameNet, Electronic Sports League, Dreamhack, etc.). Blizzard’s in-house contributions are set to clear $2 million this year, which means 2016 could be a $4 million-plus year for Hearthstone competitors — more than has been awarded since the first Hearthstone tournaments during the game’s closed beta to present combined.

Overall, 2016 is looking to be the banner year for Hearthstone esports so far, and a real litmus test of whether or not the game can sustain the immense spectator popularity it has had and grow more grassroots Fireside Gathering presence. If you’re already a fan, this is the point at which Hearthstone is going to fire up and push the limits – and if you’re new to Hearthstone, there’s never been a better time to pull up a chair by the hearth.