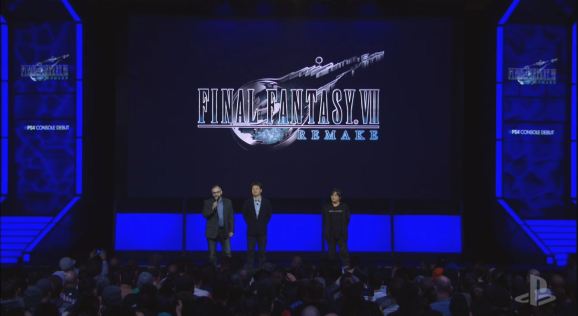 Sony made the announcement at its PlayStation Experience event in San Francisco. The video showed the first gameplay scenes from the remake of the classic Final Fantasy game that fans have called the best in the long-running series, which has shipped more than 100 million units over time.

The trailer showed a wide range of gameplay, including high-resolution graphics and some awesome combat that looked like it was real time.

Shawn Leydon, the head of the Sony game business in the U.S., came out on stage before a crowd of 5,000 people (with more watching online) and said it’s been an “incredible ride” and “we would not be able to achieve this success without all of you here.” Sony also showed a new scene from Uncharted 4: A Thief’s End.

The crowd roared when Final Fantasy VII’s main creators, Yoshinori Kitase and Tetsuya Nomura of Square Enix, came out on stage. They said Remake was a labor of love, and they couldn’t wait to make it available next year.

“If your impatience is just getting the best of you, the PC port version [of the original game] is available today [on PS4],” Kitase said.

The crowd, quite naturally, roared at just about every scene in the trailer.