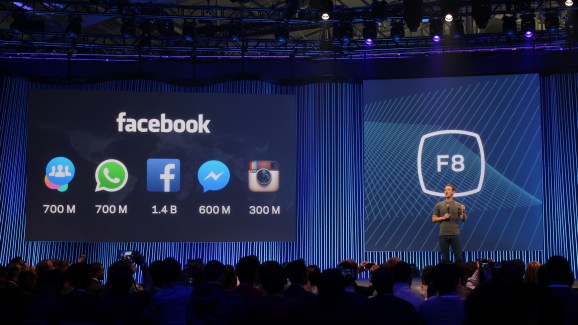 Facebook has shuttered its app development division called Creative Labs, a two-year experiment to build standalone mobile app experiences. Consequently, the company will also be shuttering the programs that emerged from this division, namely Slingshot, Rooms, and Riff.

As first reported by CNET, Facebook has pulled the Creative Labs apps from all app stores. You might recognize them as the result of ideas that came from the company’s renowned hackathons: Slingshot was an ephemeral messaging service that was an attempt to counter the popularity of Snapchat, while Rooms was a group messaging service. Riff, on the other hand, let users create social videos around a particular topic — described as a “video-sharing app for homegrown memes.”

None of these apps really gained sufficient traction, unlike other apps within Facebook’s arsenal, such as Messenger, WhatsApp, and Instagram.

The shuttering of Creative Labs could signal a shift in Facebook’s thinking, realizing that it didn’t need to formalize a division around hackathon ideas. Instead, we might see the results from these events integrated into Facebook’s core apps. Of course, let’s not forget the company’s famous mantra of “Move fast and break things” or even “fail fast,” so this restructuring of sorts could be another play by Facebook.

CNET said that Slingshot has been shuttered today, with Rooms following suit on December 23. After this date, you won’t be able to post anything to the service, but you’ll be able to delete any content you’ve posted. It’s not surprising to see Rooms closing, especially after losing its champion Josh Miller, who launched it after joining Facebook through its acquisition of Branch. Miller departed earlier this year to work at the White House.

We’ve reached out to Facebook for a statement and will update if we hear back.