Over the past month, console games have dominated TV ad spending, owning all five of the top spender spots in the gaming industry.

In November, 32 gaming brands ran 120 commercials more than 22,000 times on TV, accounting for over $94 million in airtime. With the holiday season upon us, mobile developers have been completely knocked off the chart as new console game ads have flooded television.

The clear advertising leader was once again Activision, which accounted for nearly 20 percent of the industry’s total spend for November. Coming off of their acquisition of King Digital, Activision spent an estimated $18.6 million running 11 different ads 2,475 times in November. Over 90 percent of this push has gone toward promoting its new Call of Duty game, Black Ops III, with less focus on Guitar Hero Live and Destiny.

GamesBeat has partnered with iSpot.tv, which measures TV advertising in real-time, to bring you a monthly report on how gaming brands are spending and which are generating the most digital response. The results below are for the Top 5 spenders in the gaming industry in November. 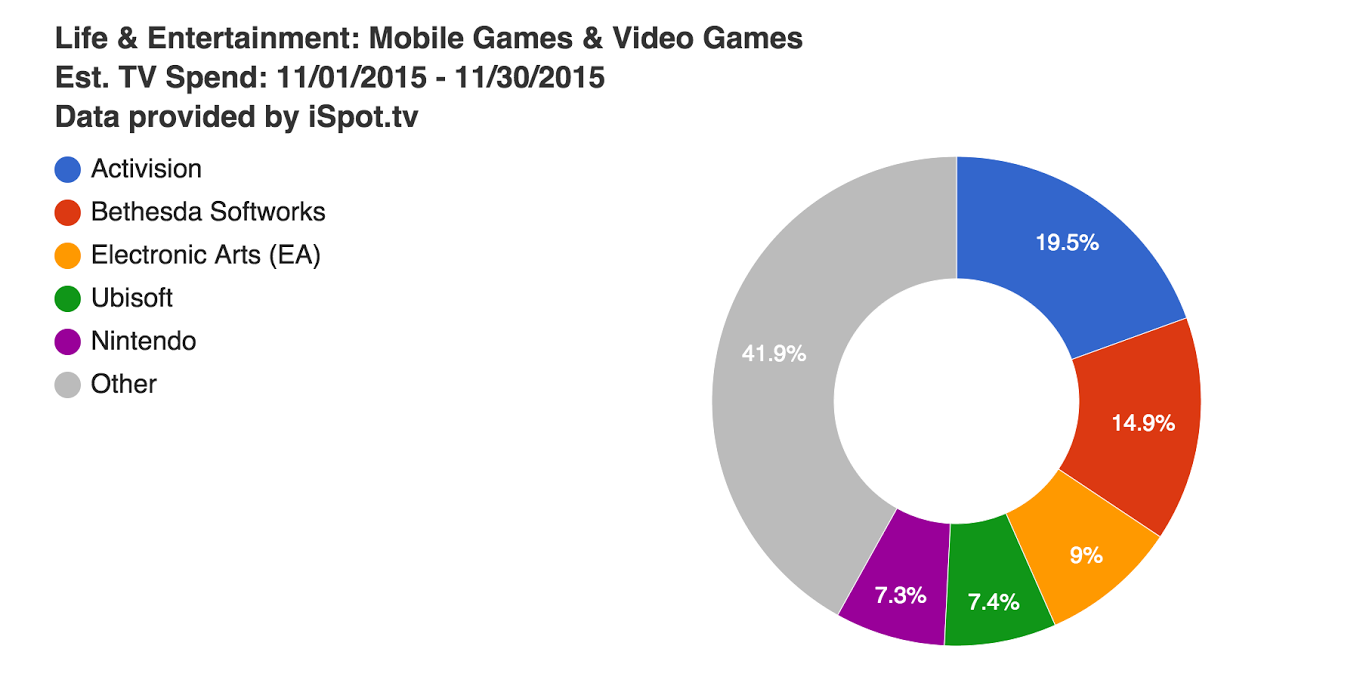 In November, Bethesda Softworks spent over $14 million on TV advertising for Fallout 4, the newest addition to its fan-favorite franchise that came out November 10. Four separate ads ran 779 times across 21 networks, accounting for just under 15 percent of the gaming industry’s total spend for the month.

Electronic Arts generated nearly 10 percent of industry’s total spend, dedicating it entirely to ads for the new Star Wars game, Star Wars: Battlefront. Of those ads, the “Become More Powerful” featuring Anna Kendrick, has run more than 500 times since its debut on November 9.

Ubisoft accounted for 7.4 percent of the industry’s spend in November. While promoting new releases including Assassin’s Creed: Syndicate and Just Dance 2016, Ubisoft focused its spend primarily on Tom Clancy’s Rainbow Six Siege. “Siege the Day,” featuring Idris Elba, has already aired more than 350 times across 23 networks since its debut on Nov. 23. Of Ubisoft’s estimated $7 million total spend for the month, nearly 60 percent was spent placing this ad.

Nintendo closes out our chart, having spent nearly $7 million running 15 separate ads in November to promote various games for the Wii U and 3DS platforms. The bulk of the spend went toward pushing Pokemon Super Mystery Dungeon, but several multi-game ads promoting the new 3DS XL also got airtime. Nintendo ran its ads 2,762 times in November, spread across 13 networks including Cartoon Network, Nicktoons and Disney XD.