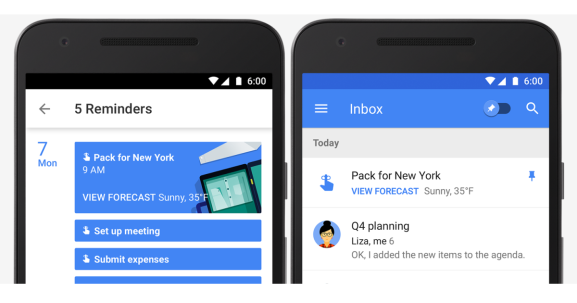 Google today updated its Google Calendar apps on Android and iOS with a new type of functionality: Reminders. As its name implies, the feature helps you add and keep track of important things you want to remember. You can download the latest version now from Google Play and Apple’s App Store.

Reminders, which are rolling out this week, are supposed to work alongside scheduled Google Calendar events, the company explained. Not only can you add them in Google Calendar, but they also work across other Google services: Inbox by Gmail, Google Keep, and Google Now. That means you can create a Reminder when you’re checking your email or just say “Ok Google, remind me to buy birthday candles,” and it will show up in Google Calendar.

Google acknowledged that many Google Calendar users already use events for this type of functionality, or they have a to-do list that is separate from their Google Calendar. The company explained that unlike Events, which come and go, Reminders remain in your calendar until they are actually done.

If a Reminder isn’t completed, it will appear at the top of your Google Calendar. When you finally do finish the task, you can just swipe the Reminder away. If you want to prevent this nagging, you can also move the Reminder to a later time, just like moving events when plans change.

Reminders also add information like phone numbers and addresses automatically. Like Inbox, Calendar uses information from your contacts as well as Google’s knowledge graph to include extra details so you don’t have to go digging when you need it.

Google said it is working on bringing Reminders to Google Calendar on the Web next. The company didn’t share timing around when that might be, but safe to say it will likely happen next year.