Two months ago, after spending about 10 minutes with Google’s new Pixel C tablet, I thought the device wouldn’t be very useful, particularly because of its cramped keyboard. After spending several days with a review unit, though, I’ve changed my mind. Of course, the device is an Android tablet, so it’s not a full computer, but it is the most evolved form of Android tablet yet.

I can’t think of a reason to get an Android tablet that doesn’t have a solid keyboard, like the optional $150 one that slides so smoothly onto the Pixel C. On its own, the tablet costs $500, so at $650, the combination of those two products is vastly cheaper than, say, the $968 iPad Pro with Apple’s Smart Keyboard, or the $1,028.99 Surface Pro 4 with Microsoft’s Type Cover. (The Pixel C and the keyboard are both available from the Google Store starting today in Australia, Austria, Belgium, Canada, France, Germany, Hong Kong, Ireland, the Netherlands, New Zealand, Spain, Switzerland, the U.K., and the U.S.)

This is a funky device, a fun device, a sturdy device — a device that gets me excited about doing stuff on a screen that’s smaller than my smaller desktop and bigger than my phone.

Of course, there are shortcomings. Could the chip be more powerful? Yes. Is the keyboard a bit small? Probably. Is it missing a trackpad? Certainly. Nevertheless, the Pixel C doesn’t fail to impress.

The biggest attraction of the Pixel C has got to be its keyboard. Typing on it is fun! The keys don’t collapse under pressure from the weight of your fingers. They’ve got some spring to them. They go down 1/20 of an inch, just as much as the keys on Google’s Chromebook Pixel.

To fit the 10.2-inch display, the keyboard has been cropped on the left and right sides. There are noticeably smaller keys, like the tab key, the shift keys, the apostrophe key, and the backspace key. The equals key has been moved down one row from its usual place on the top row. Several keys are missing: escape, volume, screen brightness, tilde, backslash, brackets, and screenshot. And yet, in a fairly short amount of time, I have become accustomed to this keyboard. It feels perfectly good for many simple tasks. (If you program in, say, PHP and you use curly braces a lot, well, you might disagree.) 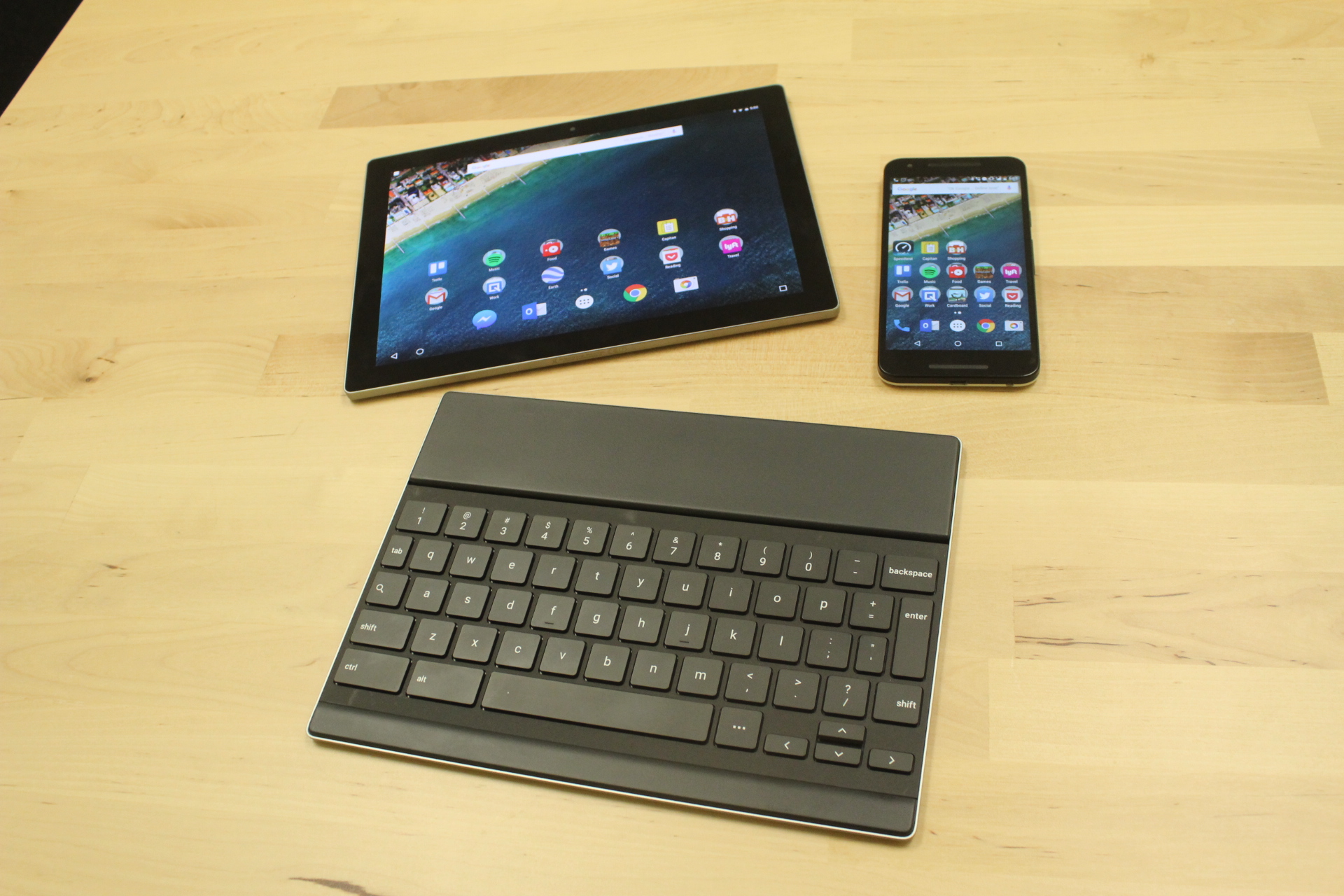 The keyboard is outfitted with an alt key — located to the left of the space bar — that’s more powerful than usual. Strike it up from any app and you’ll get a virtual keyboard with more emojis than I know what to do with, as well as Google’s speech recognition tool. On the other side of the space bar is a key with ellipses on it, which gives access to mathematical characters on a virtual keyboard. This is partly Google’s way of surfacing keys that don’t have dedicated keys on the physical keyboard, but it’s also a quick way to get to special characters even when you’re using the physical keyboard.

Anytime you want, no matter what app you’re using, you can hit the key with the magnifying glass — located in the place on the keyboard that’s typically reserved for the caps lock — and get a magic search box courtesy of the Google app. The search lets you query the Internet as well as the tablet itself. It’s something you get on Chromebooks, but for Android tablets, this is a nice bonus.

When you’re handed a closed Pixel C — that is, with the keyboard magnetically attached to the tablet — you probably won’t know what to do with it. The operative word is slide: just slide the top and the bottom in opposite directions. Then, you stick the bottom of the back side of the tablet on the flat portion of the keyboard, above the keys. Then tilt the screen up.

This might sound like a convoluted mechanical process, but it’s a party trick, a novelty. It makes the Pixel C stand out. The novelty has not worn off, and I don’t expect it to anytime soon. 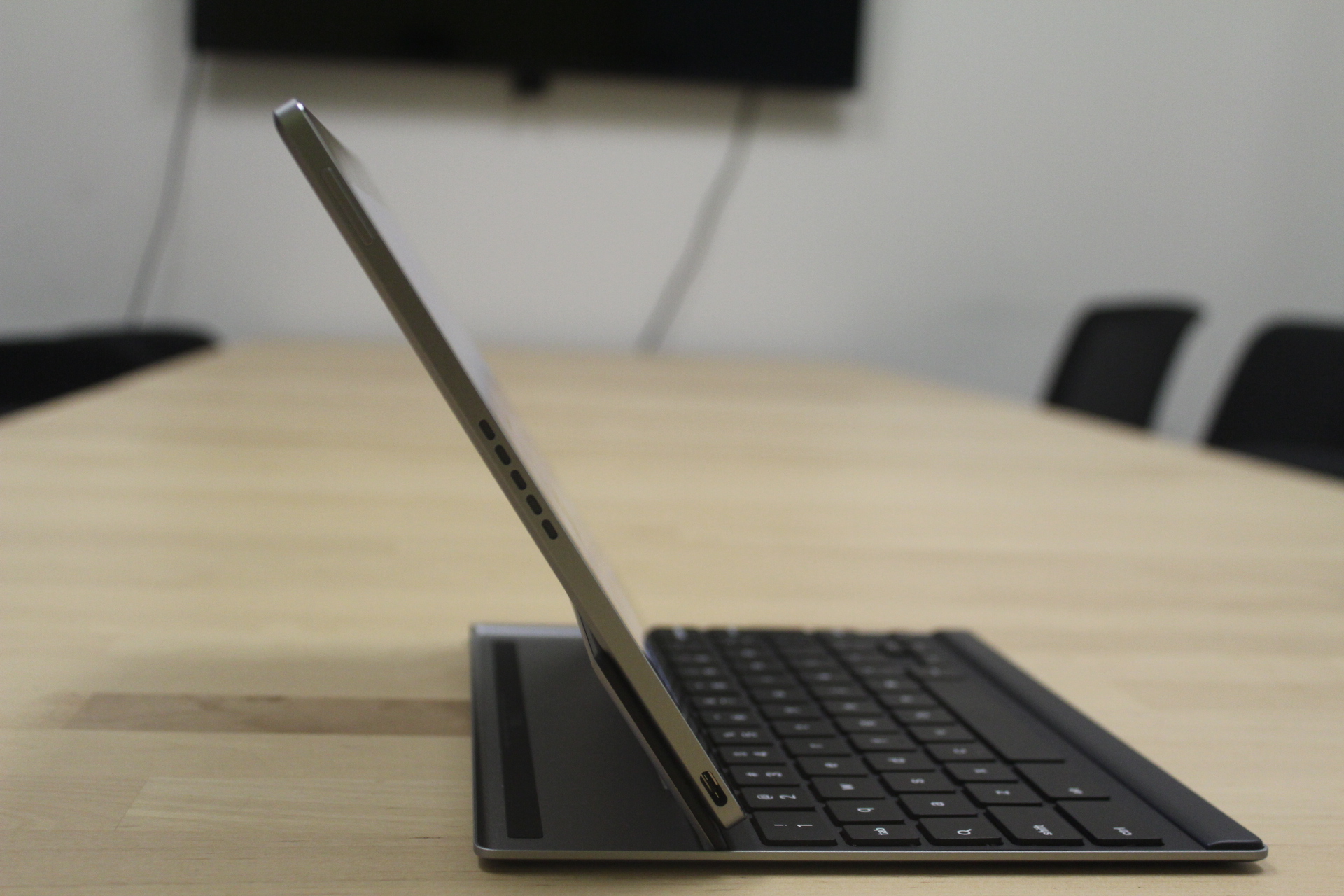 Above: The Pixel C from the side.

The Pixel C’s ability to keep the display standing on its own means that it lets you lean back while, say, watching a video in bed.

The stand mechanism is a major improvement over other Android tablets.

The display looks clear and precise and plenty bright. It delivers great-looking games and sharp high-resolution video and images. It’s not as big as, say, the Surface Pro 4, but it’s big enough for both work and play. The screen size means it feels smaller and more portable than the Surface Pro 4 or the iPad Pro.

The battery on the Pixel C will hang in there for longer than you might expect. Google advertises at least 10 hours of battery life, and I won’t dispute that. The tablet charges rapidly via the USB Type-C port, and I’m all for that. A full charge can take about four hours.

When you’re not using the tablet, you can tap the LED light on the back — yes, the one that shines the Google colors of blue, red, yellow, and green while you use it — two times and instantly get a rough estimate of remaining battery life, with green bars. It’s a feature that you don’t see on many other devices, even though it’s convenient and delightful.

And the Pixel C’s speakers can get loud, and the sound is full. For that I am thankful.

The tablet has its issues, though.

The Nvidia Tegra X1 chip can get bogged down when you give the Pixel C too much to do. The tablet warms up anytime I use a Google Earth or a Google Cardboard-compatible virtual reality app.

The eight-megapixel back camera, while capable of recording 1080p video, produces grainy images when under imperfect lighting conditions. The two-megapixel front camera works, but it probably won’t be your weapon of choice for selfies.

More storage space could come with the Pixel C. The default $500 version packs in 32GB, and you can pay more for a 64GB model. Unlike new Chromebooks, this tablet doesn’t come with 1TB of free cloud storage on Google Drive. In a perfect world, it would.

While the Pixel C does let you use some keyboard shortcuts, some just don’t work. In Chrome, for example, backspace doesn’t bring you back one page, and control-H, for history, doesn’t do anything, and in Facebook Messenger, the enter key doesn’t send your message. 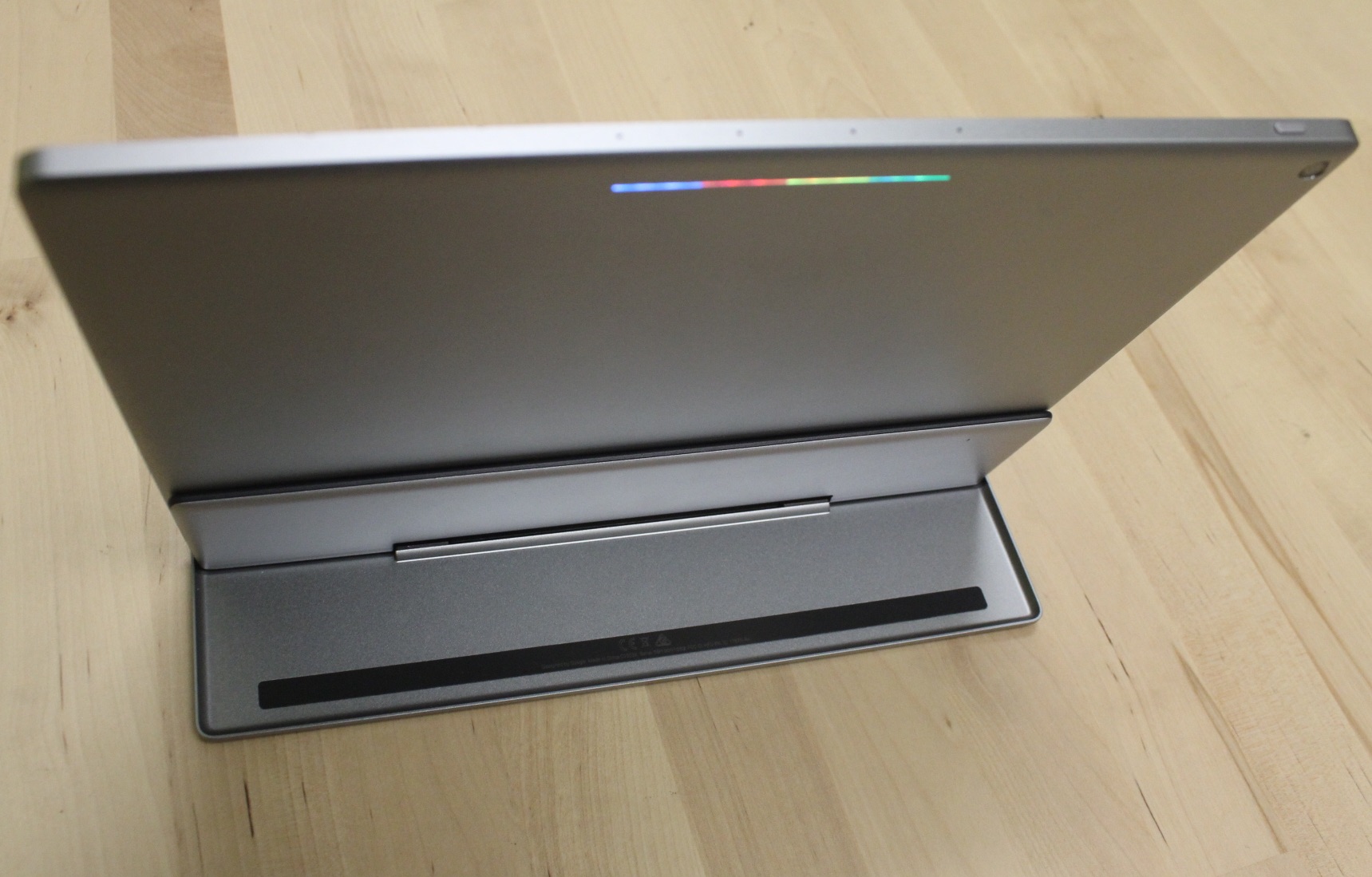 Above: The Pixel C from the back.

Like the iPad Pro’s Smart Keyboard, the Pixel C’s keyboard has no trackpad, and there’s no stylus, either. That means you’ll have to reach out and touch the screen a lot. This is acceptable, but it’s not optimal. The Surface Pro 4 has an advantage in this department.

The keyboard is missing a backlight, meaning that you had better know where to place your fingers on the keys without looking, or you had better keep a light on when you’re using the tablet at night.

The tablet can’t be propped up in portrait mode, which can be a problem for some apps, including Instagram and Twitter, specifically with its recently launched Moments feature.

When I switch tabs in Chrome, or even when I switch to Chrome from some other app, the tab can go blank, and all of its content seems to reload. This process takes just a second extra, but it’s frustrating.

Many websites load in mobile format even though they should be in desktop mode when you’re using the physical keyboard. I guess the screen size of the Pixel C is just small enough that it triggers mobile versions to load. It’d be nice if you could disable that with a single button in Chrome.

Swiping is an intuitive gesture for touch screens, but on the Pixel C it can be counterintuitive. Occasionally when I swipe down, the screen responds by going up, and vice versa. 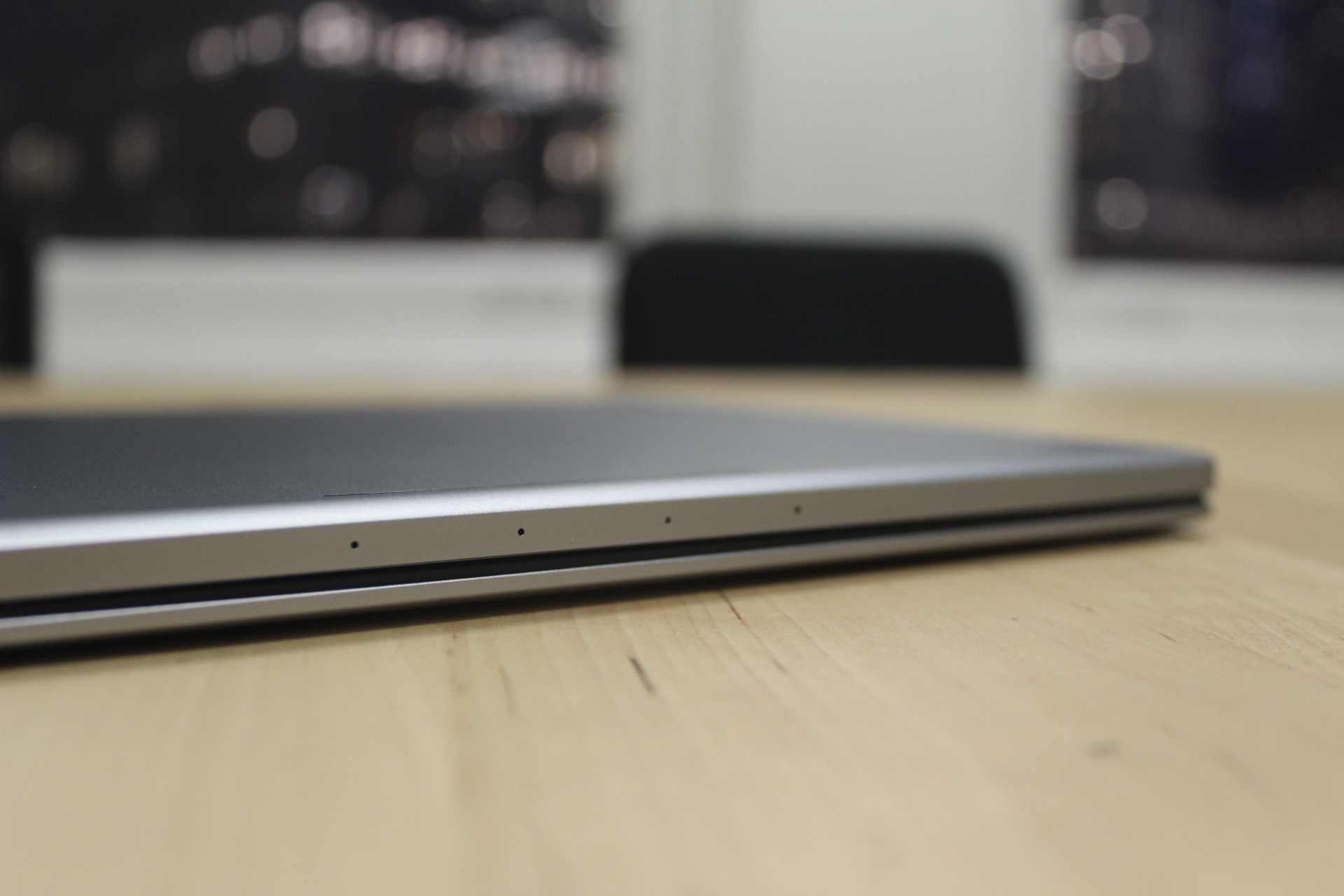 Above: The Pixel C at rest.

When Google announced the Pixel C, the company said the four microphones near the LED light on the tablet would allow you to give voice commands from across the room. I found the range to be more like four feet. Oh, well. At least Google usually understands my voice better than Siri or Cortana do.

Also, there is nothing like the Continuum feature, which changes the presentation depending on whether you have the optional Type Cover keyboard attached. This isn’t essential, but it would be a nice way to further distinguish the Pixel C from other Android tablets.

Even with these flaws, and even though it’s not a PC with a full desktop-grade operating system, the Pixel C is still quite likable. Now that Google has proven that it can build its own solid Android tablet, one wonders if Google needs to keep having third-party hardware vendors make Android tablets stamped with Google’s Nexus brand name. HTC’s Nexus 9, to choose the most recent Nexus tablet, is no match for the Pixel C.

The Pixel C shows Google building on the high engineering standards of the pricey Chromebook Pixel, but coming through with something more affordable, more mobile, and more contemporary. It’s good to see that heritage living on, now that Google no longer owns Motorola Mobility.

Because Google is behind the Pixel C, the tablet will get the latest software updates before other devices, such as Samsung’s Galaxy Tab or Sony’s Xperia Z4. And it’s got stock Android Marshmallow — no bloatware to see here.

Altogether, the Pixel C is very appealing. It’s the type of gadget that you don’t need but want anyway. For an Android tablet, that’s an achievement.