It’s no secret that Microsoft has been struggling in the mobile space ever since its strategic 2010 reboot, wherein it scrapped its legacy Windows Mobile platform for the incompatible Windows Phone. In the face of unprecedented competition from Apple’s popular iPhone (not to mention Android) — the company has failed to gain anything close to mass market adoption.

This, despite an exclusive committment from one-time mobile powerhouse Nokia to only manufacture Windows Phone handsets, and a promising stable of launch OEM partners that has gradually disintegrated to almost nothing. As its market share continued to free fall, I’ve even asked, rhetorically, at what point Microsoft would consider abandoning its mobile participation.

But something has been happening, albeit at a glacially slow pace, for the past three years or so, that has given Redmond what may be its saving grace in the larger mobile category. That something goes by the brand name Surface, and represents not a line of phones — not yet, at least — but a family of tablets that eschew the iOS and Android strategies of phone-tablet synergy and dare to offer consumers the full version of Windows in a slate form factor.

Surface, now on its fourth generation, is positioned not as a traditional “third screen,” but as a user’s primary computing device: a laptop replacement, when paired with optional keyboard covers. The lineup has been quietly building up a dedicated fanbase while at the same time winning over critics, with the Surface Pro 4 widely praised by reviewers as the very model of a hybrid device.

In fact, many critics have noted that the Pro 4 is much more functional than Apple’s recent attempt to penetrate its niche, the iPad Pro. More than a few reviews cite iOS as one of the Pro’s significant shortcomings, with respect to the competition.

And despite being priced much closer to the laptops that it intends to replace than even Apple’s premium iPad offerings, Surface is said to be on the cusp of what may be a watershed moment in Microsoft’s nearly decade-long struggle to repeat its desktop successes in the growing mobile landscape: WinBeta reports that, for the first time, Redmond’s tablets may have outsold Apple’s in the month of October, at least online and in the U.S.

If true, the data — said to be culled from a prerelease version of a 1010data report on the state of tablet sales — would be nothing short of earth-shaking. A former Goliath, relegated to a David, returning to slay the very entity that had made the very same David-to-Goliath transformation at the dawn of the smartphone golden age. According to the alleged report, Microsoft will have captured 45 percent of U.S. online tablet sales in October, not just more than second-place Apple (17 percent), but more than both Apple and third-place Amazon (10 percent) combined. 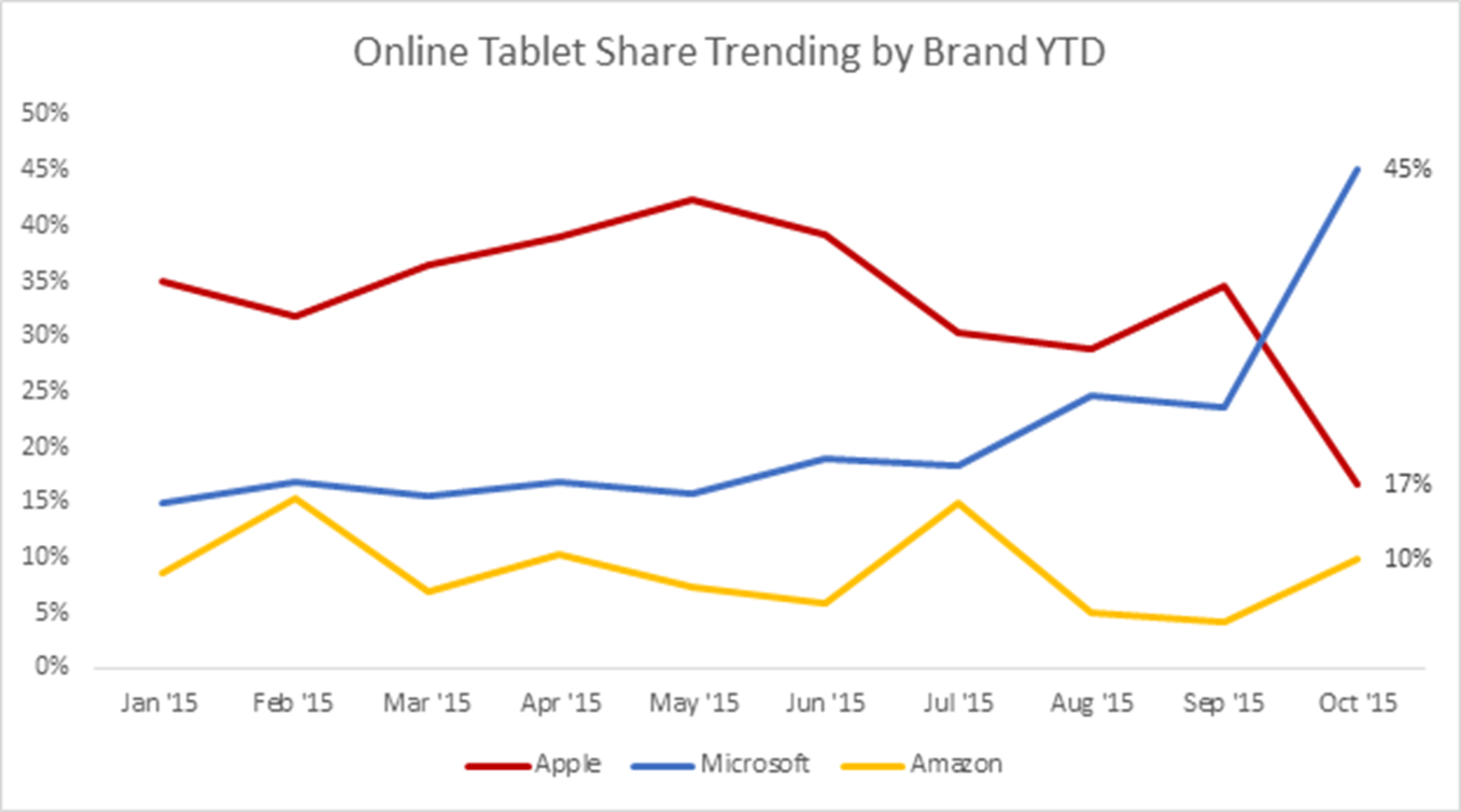 Even more astonishing is the fact that over the past 12 months, Surface products reportedly sold for an average of $844, whereas Apple’s averaged less than half that price, at $392. Amazon’s Fire lineup? An extremely budget-friendly $150. It’s not clear what the exact sales prices were in October, but it’s no small feat if Microsoft is selling more of its pricier entrants in the field than the very company that redefined the category. Particularly as Apple has dominated year after year with its tight vertical integration and even tighter horizontal symbiotic relationship with its class-leading handset.

At least on the, ahem, surface, the data seems plausible. According to Ross Rubin, senior director of industry analysis at App Annie, “It wouldn’t be surprising to see a big spike after Microsoft had released a new version of the Surface Pro, the Surface line that’s enjoyed the most success. Also, a lot of Apple’s sales come at its retail stores, which wouldn’t be reflected in this data.”

If Microsoft has a second life in mobile, an ace up its proverbial sleeve with the clock winding down on fourth and long (apologies for the horrific mixed metaphor), then, its name is surely Surface. So beloved is the sub-brand, led by popular, articulate  Redmond VP Panos Panay, that rumors of a second half Surface-branded phone no longer seem to be a pipe dream, but a manifest destiny.

Will Surface’s midas touch be enough to gild a product category now struggling (despite the acquisition of Nokia’s former device division)? It will be a herculean task, to be sure, especially since the Windows Phone (now Windows 10 Mobile) app ecosystem has been resigned to second-class citizen status in the mind of many developers. But the beauty of Microsoft’s efforts to unify its code under Windows 10 is that it may allow for an end run around this significant impediment; the universal apps paradigm may well allow a Surface phone to forgo traditional mobile apps and, like its namesake, run full Windows apps right out of the box.

For the first time in years, I can actually see an endgame for Microsoft’s mobile aspirations that doesn’t end with disappointed fans and a fallen giant. If you like Windows — and there are quite a lot of you out there — that’s something to really get excited about.