A new generation of intergalactic heroes and villains are about to emerge on the silver screen — and in your living room, too.

Star Wars: The Force Awakens, the much-anticipated sequel to the original trilogy of Star Wars films, opens in theaters on December 18. That’s also the day when The Force Awakens playset adventure for Disney Infinity 3.0 comes out. The popular toys-to-life game already has levels and characters based on the older films: The Twilight of the Republic play set covers the Clone Wars era, and Rise Against the Empire retells the story of Luke, Leia, and Han Solo.

In The Force Awakens add-on, you can play as newcomers Finn, Rey, Poe Dameron, and Kylo Ren. But while the Disney Infinity adaptation includes some plot elements from the new film, it’s leaving at least one big reveal just for the theaters: the ending. 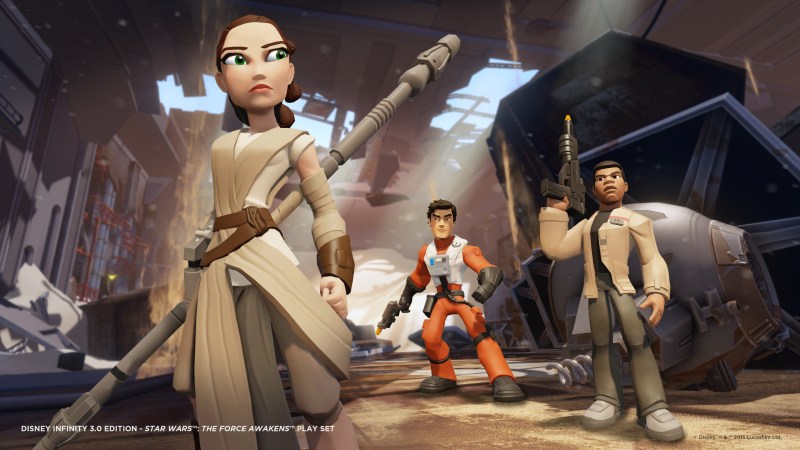 Above: Rey (left), Poe (center), and Finn in The Force Awakens play set.

It surprised me when I found out about this during a press event for Star Wars: The Force Awakens in Los Angeles. But it makes sense given how secretive Disney has been about the movie’s plot, a strategy that also extends to the way it shows the game. Representatives from developer Disney Interactive showed off a level based on Jakku, a new desert planet from the film. It was the only piece of content the House of Mouse let them show that day.

According to one of the representatives, The Force Awakens playset is like an “appetizer” for what we’ll see on the big screen. But he also added that hardcore Star Wars fans shouldn’t play it until after they watch the movie. I saw him run around as Finn, who’s best at attacking enemies from a distance with his blaster rifle; and Poe, who’s more of a melee fighter. Like in Twilight of the Republic and Rise Against the Empire, you can unlock other Star Wars toys in the playset by finding special coins.

But the mystery doesn’t end there. Disney gave away Kylo Ren figurines. The new baddie with the crossguard lightsaber is unplayable until December 18, even in Disney Infinity’s free-for-all Toy Box mode. That’s because his fighting moves are — remarkably — also considered spoilers for the movie.

This is the message I get when I try to use Kylo Ren on the Disney Infinity base. 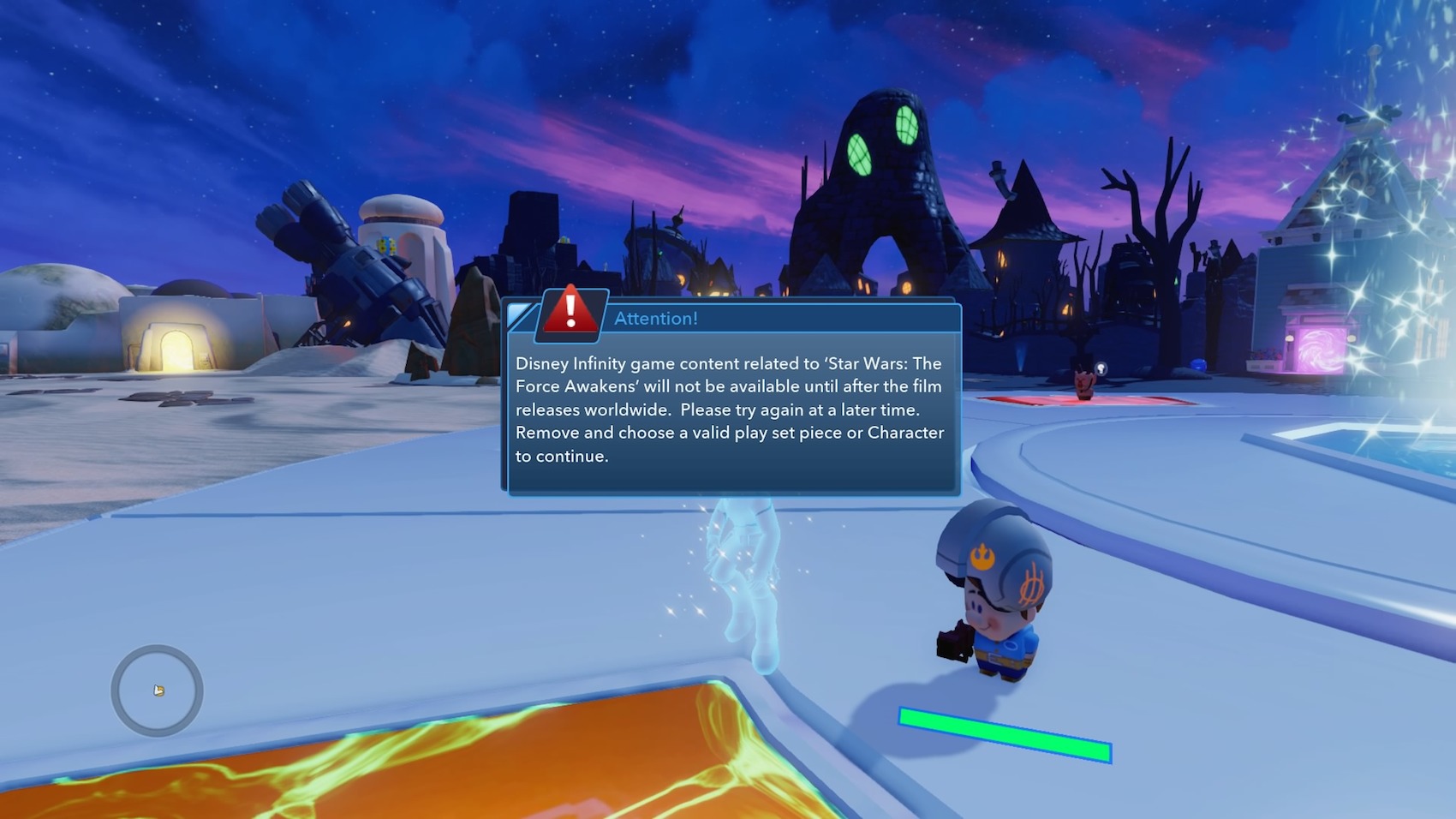 Above: I can’t play with Kylo Ren till the 18th.

The actors get to play with themselves

To stay true to the movie, Disney Interactive hired some of the actors to reprise their roles for the game: John Boyega (who plays Finn), Daisy Ridley (Rey), Oscar Isaac (Poe), and Adam Driver (Kylo Ren). Boyega is actually a big Disney Infinity fan. When he first met with Disney Interactive’s VP of production John Vignocchi a few months ago, Boyega asked him if his custom Toy Box levels from Disney Infinity 2.0 would transfer over to 3.0.

That enthusiasm showed when I asked Boyega and Isaac about their work on the game during a press conference.

“It’s been … [Laughs]. To be a playable character — I get to play with myself. [Audience laughs] Booya! Disgusting. [He turns to producer Kathleen Kennedy] Sorry, I had to tell that joke,” he said. “But it’s been amazing. It was fun. The characters in Disney Infinity are more of the child-like versions of the characters in the movie. So that was very cool.”

“Yeah, I hadn’t done anything like that before, so that was very fun to be able to do,” added Isaac. “It is a slightly more energetic, amped up, child-like version [of my character].”

Boyega then gave the room a sample of his performance. 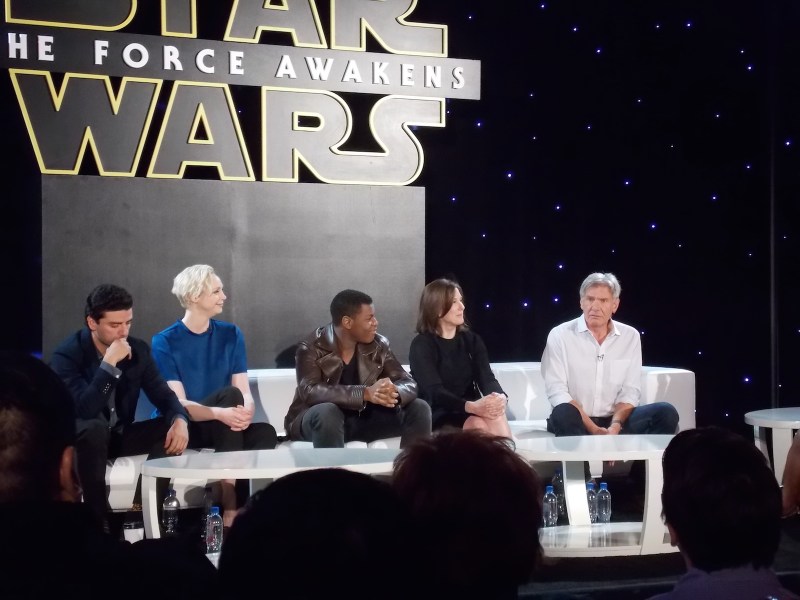 Above: This is Harrison Ford’s “Where the hell is my Old Han Solo toy?” face.

I came out of The Force Awakens event not knowing much more about the movie than I had coming in. Other journalists remarked how strange it was to hold a press conference for a film without screening it for the critics first.

It proves how far Disney is willing to go to protect the story. Starved for information, fans gobble up any possible hint or rumor and create elaborate theories to explain some of the gaps in the plot. The fact that the game is also being kept under wraps for the film’s release only adds to that speculation.

In the meantime, I’ll just use my Kylo Ren toy as a snazzy paperweight.