Lego and Warner Bros. have made a gigantic pile of money making Lego-themed video games for a long time. And one of the people responsible for that success is Arthur Parsons, who heads one of the Warner Bros. TT Games development teams. He has made a ton of Lego-based video games, which are popular because their sly sense of humor resonates with parents and their goofiness is a joy for kids.

He’s at it again with Lego Marvel’s Avengers, which is a massive game with more than 200 Marvel superhero characters. The title is set in a Lego version of New York City, but you can also journey to other “hub” worlds such as Washington D.C. The game meshes with the storyline of the latest Marvel film, Avengers: Age of Ultron. We took the game for a test drive in a tour guided by Parsons.

The Lego action-adventure video game is under development at TT Games and will be published by Warner Bros. Interactive Entertainment across a bunch of platforms on January 26.

We caught up with Parsons at the PlayStation Experience (PSX) fan event in San Francisco last weekend. Here’s an edited transcript of our talk. 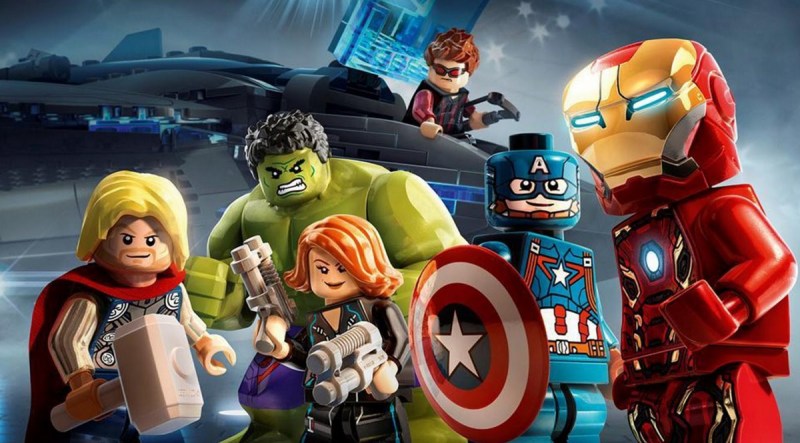 Above: Lego Marvel’s Avengers has more than 200 characters.

Arthur Parsons: Lego Marvel Super Heroes in 2013 had an open world. We loved that, and so we’re bringing that back in the new game. Outside of the main game, you’ve effectively got the whole of Manhattan to explore, with puzzles and quests and races. You have Avengers Tower. Wherever you go, you can see all this stuff to do on the mini-map.

Anything made of Lego is interactive — any vehicle, any object. I can hop into any of the cars. It gives people an open world experience with quests and missions and boss fights that just happen around the city. The idea is that there’s always something to do.

The more fancy vehicles, more Marvel-themed, here’s where you get access to those. You can bring up Lola from the Agents of S.H.I.E.L.D. series. There’s Thanos’s helicopter from the 1960s comics. Moon Knight’s moon copter. As we do with all the characters, the vehicles have all the powers and abilities you’d expect. Lola is known for flying.

GamesBeat: Why so many characters?

Parsons: Lego games are renowned for having huge rosters of characters, but we’ve upped the ante this time around. Someone like Tony Stark, everyone knows Tony Stark and Iron Man. This time around we have all the Iron Man suits, like 15 different suits. Every one is unique. If I choose the Mark VI, Tony will suit up in a way that’s pertinent to that suit. It’s all in this section of Stark Tower. In Age of Ultron you saw the Hulkbuster, so you can suit up in the Hulkbuster armor, run around the city, and blow up everything if you want.

The main story’s quite authentic to Age of Ultron. Outside the story is where the game comes to life with all these different characters. It’s all about their personalities. If you want to be Hulk, if you want to be Bruce Banner, whatever the character you want to be, you can do it. Hulk can leap around the city, climb buildings, and smash anything you see. He can do ground slams. He has his thunder clap. He can pick up bits of debris from the ground. But it’s really about personality. It doesn’t matter who you pick. They’ll all have personality.

Cloud Nine is a character from the comics that you might not be aware of. She’s known for having this cloud she can call on and fly around. We’ve got Devil Dinosaur, a very cool classic character. It’s an excuse to get a T-Rex in the game without having it be Lego Jurassic World. You’ll have characters like Fin Fang Foom, who’s known for being able to transform. He can effectively turn into Godzilla and smash the place up. You have all this free-play content, but it’s all in the realm of Marvel. It’s more than just Avengers.

GamesBeat: How many characters are there?

Parsons: More than 200 altogether. But that’s an ever-increasing list. We never quite know when to stop. There are about 8,000 Marvel characters in total. We can’t do that many. But when it comes to Lego games, this probably has the most of anything we’ve done.

Up in the sky we’ve got the Helicarrier. We have these quick boost pads that allow you to get up there quickly. 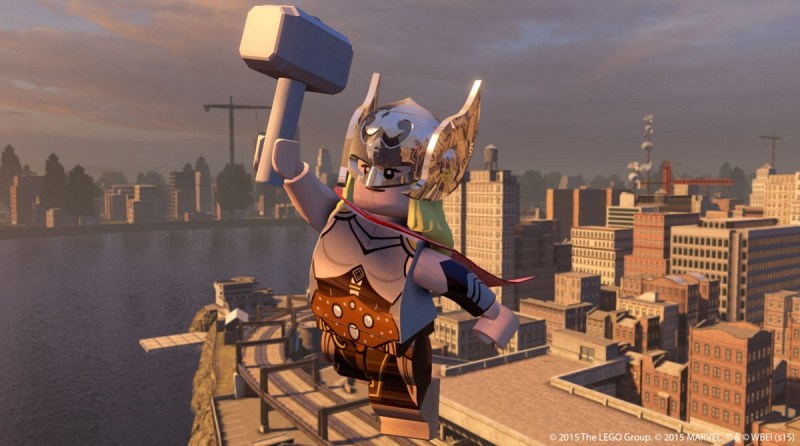 Above: Lego Marvel’s Avenger takes place in New York and seven other “hubs.”

GamesBeat: Is this modern, or a particular era for New York?

Parsons: It’s the modern day. Obviously it’s our version of New York. Not all the buildings are in there because of licensing rules. Some people like having their buildings in there and some don’t.

You can go inside the Helicarrier, or get in the Quinjet up on the deck. The Quinjet allows you to effectively fly up into space, which is what we use as a level select and a way of transitioning between hub worlds. It’s not just Manhattan. There are another seven hub worlds. I can drop into Washington and the characters will skydive down. It’s a loading screen, but an interactive one. People can stay immersed in the game without being dragged out into a static, boring screen. They’re still being an Avenger.

Here you come down into Washington. These hubs aren’t quite as big, but we’ve still got the Lincoln Memorial and other bits of Washington you’d want to see. You’ll come across quests for Winter Soldier, things like that, and puzzles to interact with. Any character can come into any area here.

I can drop Stan Lee in. He’s got Quicksilver’s speed, Captain America’s shield. Not wanting to be outdone, he also has the ability to turn into his own version of the Hulkbuster. We call it the Stanbuster, very original. But people who play our games expect a level of fun and humor that’s a little bit away from—In Lego Avengers they’re going to expect to play the Avengers movie. They’re not going to expect to run around as the Stanbuster in Washington. We try to make sure we give them extra stuff. He can also transform into Excelsior Hulk, with all the same moves as Hulk.

GamesBeat: How do you unlock the whole set of characters? Is it just time spent in the game?

Parsons: I’ll dial back here and play an actual level section. To unlock the characters, you’ll get them as you progress normally through the game. In level one you’ll unlock the characters you play there – Captain America and a few others. All the others you pick up in the free play components, whether it’s boss fights in a hub area—Say you come across Doctor Strange. He’ll ask you to do something and that’ll unlock Doctor Strange. It’s all through exploring the open world.

For the main story, we’re being as faithful as we can to Age of Ultron and the other movies. We’ve featured loads of Marvel movies, like Iron Man 3. We’re trying to be as authentic as we can while still keeping the Lego humor in there. Our story starts at the beginning of Age of Ultron, because that gives us the goal of hunting down Loki’s staff. It connects us to the start of Avengers where Loki is given the staff.

GamesBeat: How many next-gen Lego games have you guys done now?