Developed by TT Games and published by Warner Bros., it’s arriving in January on Xbox One, Xbox 360, PlayStation 4, PlayStation 3, Wii U, 3DS, and Vita. Before getting hands-on with the game, I already knew it would have splitscreen cooperative play, many fan-serving Marvel characters, plenty of fetching and carrying busy work, and an inviting Free Play mode where you revisit levels with unlocked characters to discover new items.

However, Lego Marvel’s Avengers goes further than previous games, now including content from multiple Marvel movies, more open worlds, and a super-sized portable version. It works hard to warrant a single-franchise purchase alongside players’ investment in the wide-ranging Lego Dimensions.

I spoke to Stephen Sharples, assistant game director on Lego Marvel’s Avengers, about how this works in the game. “Lego Marvel’s Avengers is primarily focused on The Avengers, then carrying on to Age of Ultron. Partway through the story in the chronology you unlock three phase two movie levels. The greatest bits of Iron Man 3, The Dark World and The Winter Soldier. Alongside those missions, you unlock open world hub environments like Washington, D.C. and Asgard.”

In a post-Dimensions era, it’s clear that TT Games understands it needs to deliver more content and value. In fact, the sound of these unlockable movie levels has a distinctly Dimensions ring to it, as progress in the campaign unlocks more expansive spaces to investigate at our leisure.

Also helpful in selling Lego Marvel’s Avengers to Dimensions owners is that Marvel isn’t included in the toys-to-life game. Players looking for their Lego Marvel fix after Lego Marvel Super Heroes only have one place to look.

The handheld versions are another good Dimensions-proof hook as that game isn’t on 3DS or Vita. Those who have completed Lego Marvel Super Heroes on portable systems will be excited for Lego Marvel’s Avengers, even before considering enhancements to loading times and the greater scale of this game’s open worlds.

Playing the game on Vita was reminiscent of the 3DS exclusive Lego City Undercover: The Chase Begins, with an large city to explore and various missions to take take on. Whereas Lego City Undercover was criticized for slow and too-frequent loading screens, I didn’t encounter a single one in Lego Marvel’s Avengers on the Vita. Visually, the game also felt closer to its console counterpart. These handheld experiences still lack the much-requested multi-player modes (not seen since Lego Batman 2 on the DS) but nevertheless are a strong version of the game you can play on the go.

But perhaps the most convincing argument for these grander stand-alone Lego games is the time and space it grants TT Games to go to town on the characters and plot lines. Sure, Lego Dimensions is a mash-up treat, but playing the opening level of Lego Marvel’s Avengers gives a greater sense of substance. It shares the plot-pacing, characterization, and characteristic tongue-in-cheek quips with Dimensions, but in long-form players encounter more drama, weight, and emotion.

For all this though, Wedbush Securities analyst Michael Pachter sees the Dimensions factor less of a problem, “the market for Lego is huge, so there is plenty of room for all entries to thrive. They aren’t aimed at the same customer.  Dimensions is toys to life, the others are games. Different audiences.” 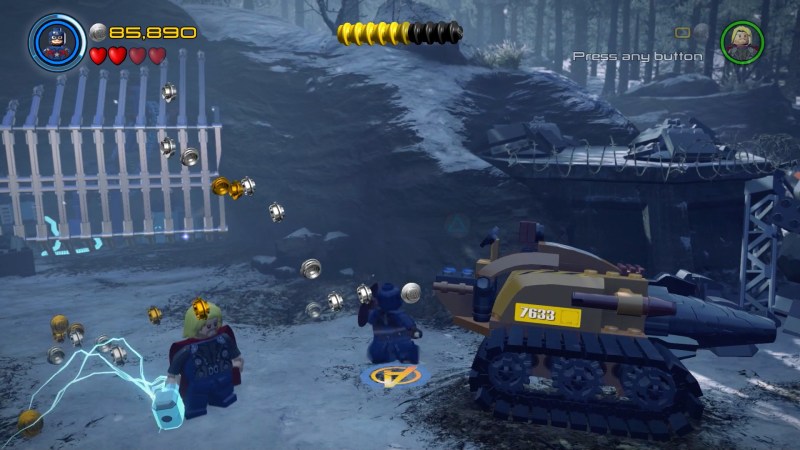 This is certainly true, although the toys to life and gaming audience likely overlap in families and are purchases that both pass the same parental keepers of the purse strings. Parents I work with will likely respond to requests for another Lego game with “didn’t we just buy that big expensive one?” In my household too, Lego Marvel’s Avengers will need to work somewhat harder to impress with our growing collection of Lego Dimensions mini-figures sitting proudly next to the TV.

Getting hands-on with the game happily underlines that TT Games sees this too, going above and beyond what it has done previously to offer strong value for money. For Marvel fans, the space afforded to both the movies and the lesser known recesses of this universe is reason enough for these single-franchise experiences to continue for years to come.