Google just launched a website dedicated to showcasing Indian startups and entrepreneurs — it says the country now has 4,100 startups, giving it the “third-highest number of tech startups in the world.”

But the site is also very much a plug for Google’s own services, such as YouTube and AdWords.

“As we continue to work towards this vision, we’re very excited to launch a dedicated destination (g.co/digitalindia), where we attempt to capture how this digital revolution is unfolding in India,” Google’s Southeast Asia and India VP of sales and operations, Rajan Anandan, said in a blog posting.

“With real stories of entrepreneurs and small and medium businesses, this destination showcases how they’re achieving their dreams, goals and aspirations, and how Google is enabling them in these achievements.”

Here’s the basic blog-style layout Google has opted for:

And here’s an example of how the article layout looks (there is a picture above the headline that I have cut for the sake of this screenshot): 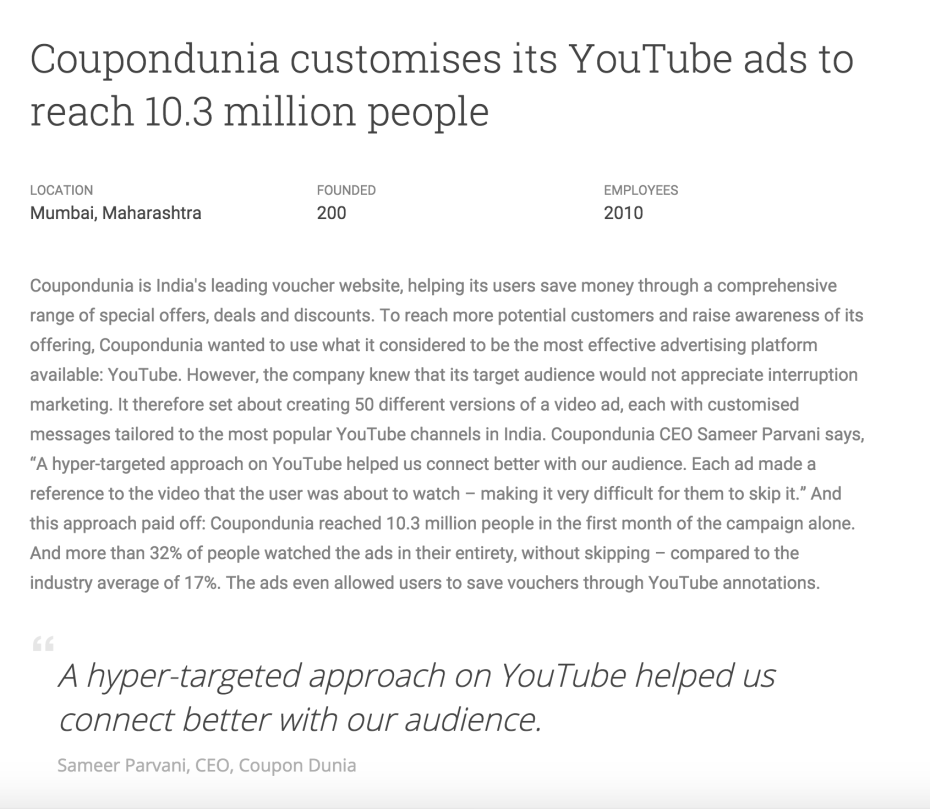 As you can see, Google is highlighting biographical information: the location, year the company was founded, and how many employees it has. (Someone in charge of the content on the blog has clearly messed up the example above though — the year and number of employees are the wrong way around.)

In some cases, as with Craftsvilla, a short video is used in place of a header image for the profile. A single (admittedly long) paragraph sums up the company and its progress to date, and a pull-out quote at the bottom usually plugs how a Google service — such as YouTube — is helping (or “enabling”) the startup.

In my brief look over the blog, it still seems a big buggy and unpolished (I had to reload the page a few times when it stopped responding). I expect Google will fix that soon, though. Stories can be filtered by industry, with tech getting its own section alongside areas like education, entertainment, and manufacturing.

“The number of internet users in India are expected to reach over 500 million by 2018,” Google says on the landing page. “By 2018, 8 million Indian companies will connect and perform transactions online.”

While the portal is unabashedly a plug for Google’s own services, it’s fun and insightful to dip into if you’re interested in learning more about some of the startups coming out of India today.