PARIS, France — To understand just how much painstaking craftsmanship and thought went into every single aspect of Devialet’s Phantom speaker, all you have to do is watch CEO Quentin Sannié take one apart.

Over the course of two hours at the company’s Paris headquarters, Sannié explained the design decisions that went into the Phantom’s 10 components: What technology challenges had to be overcome, which materials were tried and selected, and where in France each piece is manufactured and assembled.

Yet that’s still nothing compared to the look of joy and pride on his face when he pulls out his smartphone and cranks the volume on the Phantoms arranged around the room. The booming, crystal-clear sound creates a physical force that makes the listener feel like they’re part of the music.

This is the impact that Devialet hopes will seduce consumers into paying about $2,000 for a 23-pound wireless speaker they can tote around their homes. To succeed, Devialet must create a whole new category for speakers, introduce itself to a U.S. market where it is virtually unknown, and swim against the trend of consumers preferring a personal listening experience via headphones.

It is an audacious bet, as much a passion project as a product. But after spending millions of dollars developing the Phantom’s technology and design, Devialet believes it is ready to be the rare French technology success story in the coveted U.S. market.

A deal announced this week that will place a Phantom in every U.S. Apple store is just the latest sign that the company is succeeding in winning important converts to its cause.

“I’m not an audiophile,” Sannié said. “But I love music. And I still remember what I felt when I heard the first Phantom prototype. It was so emotional. I felt that if we could provide this quality of sound to people around the world, we would change everything in this market.” 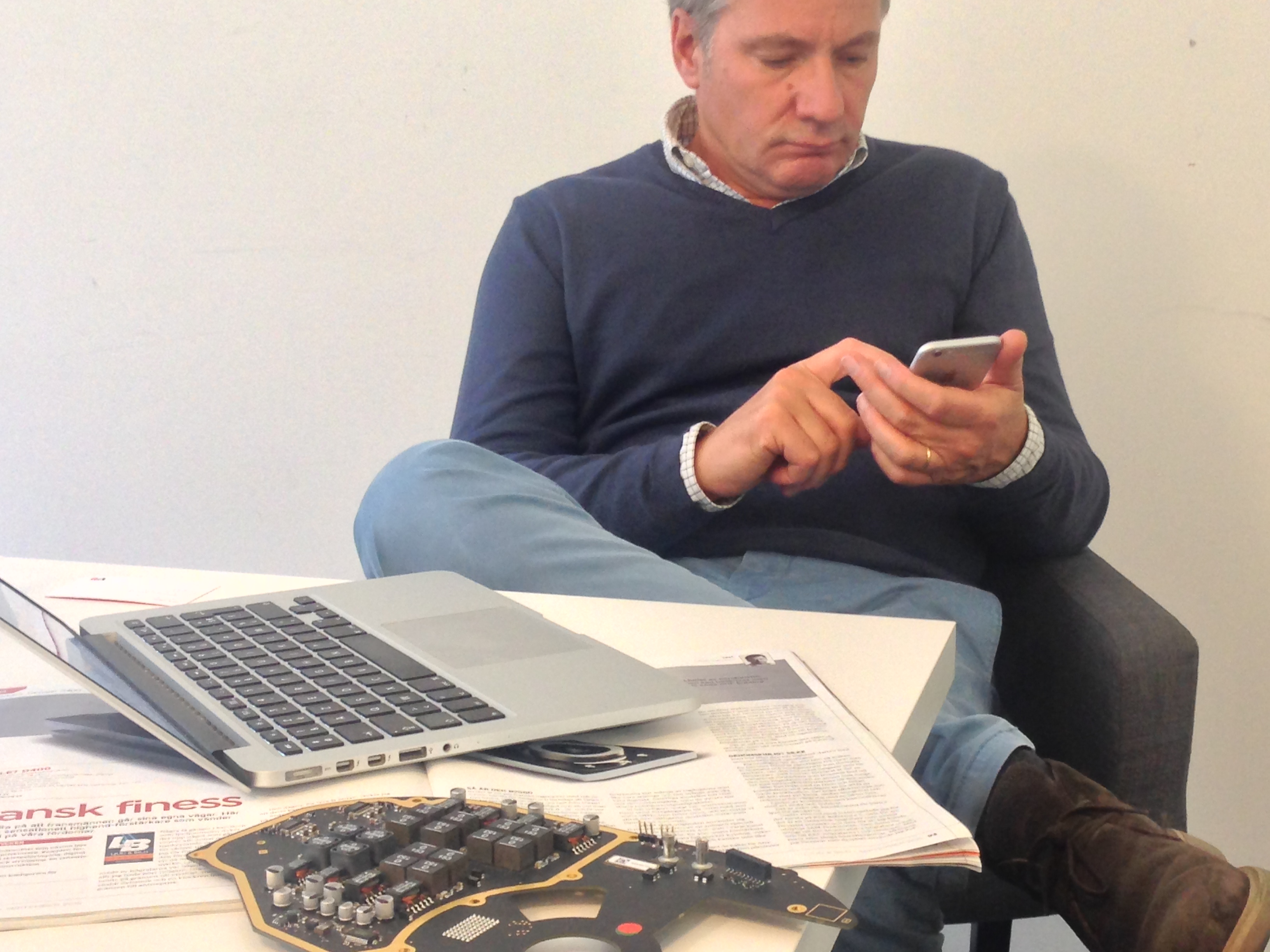 Above: Devialet CEO Quentin Sannié demos the Phantom speakers at the company’s headquarters in Paris.

These days, Devialet is acting like a startup that is not really a startup. The company was actually founded in 2007 by Sannié; Pierre-Emmanuel Calmel, an engineer; Emmanuel Nardin, a designer; and Mathias Moronvalle, an engineer.

The company’s headquarters is in a Gustave Eiffel building in Paris, above a street-level boutique where consumers can test-drive its products. After a Devialet salesman brewed me an espresso and gave me a demo of the Phantom, I went upstairs to meet with Sannié.

A lifelong entrepreneur, he is also an enthusiastic music fan who had always dreamed of doing something in audio. About a decade ago, he got a call from his cousin, Nardin, who was excited about some audio breakthroughs being made by Calmel. Calmel had been working on a new project with Moronvalle, who had both worked together previously at Nortel Networks.

That was the beginning of a partnership that led to the founding of Devialet. The name is a nod to Sieur de Vialet, an engineer who also wrote part of the “Encyclopédie Française,” a project that attempted to catalog all aspects of French life and culture.

The company’s first products were dubbed the “Expert,” and consist of a family of amplifiers that range in price from $5,500 to $24,000. The princely sum doesn’t even take into account the cost of all the others components needed for a high-end home audio system.

Devialet developed a number of innovative technologies for the Expert, including a Speaker Active Matching (SAM) system that tailors the sound to match the most optimal of 175 different speaker settings for any music playing. It also created a complex hybrid of analogue and digital sound (ADH) that allows for more precision at higher volumes.

The Expert amplifiers made Devialet a hot name with audiophiles. But that wasn’t enough for the founders, who dreamed of putting this powerful sound system in the hands of mainstream listeners. Or, at least putting it closer to their reach.

“The high end is a tiny market,” Sannié said. “When we set up the company, it was not only to give this experience to high-end audiophiles, but to also give it to anyone who was excited by music.”

Thus began the second stage of the company’s life: To make a Wi-Fi speaker that could be controlled by your smartphone and produce sound that rivals some of the highest-end sound systems.

To do this, Devialet engineers reduced the size of the chip that powered the Expert by more than 90 percent (from 200 cm2  cm to 1 cm2). They created the spherical shape to distribute the sound evenly in all directions.

On the outside, the polycarbonate material used for the case gives it a futuristic look. The Phantom’s front boasts an elaborate icon created by Ernst Chladni, an 18th-century German scientist who used sand and other materials to visualize sound waves.

For the metal components inside, the company hired automotive engineers to better understand how to design, mold, and manufacture the parts. In fact, each piece is manufactured in one of several locations across France. Sannié said the company wanted to be able to keep a close eye on quality and to be able to move fast when making changes. 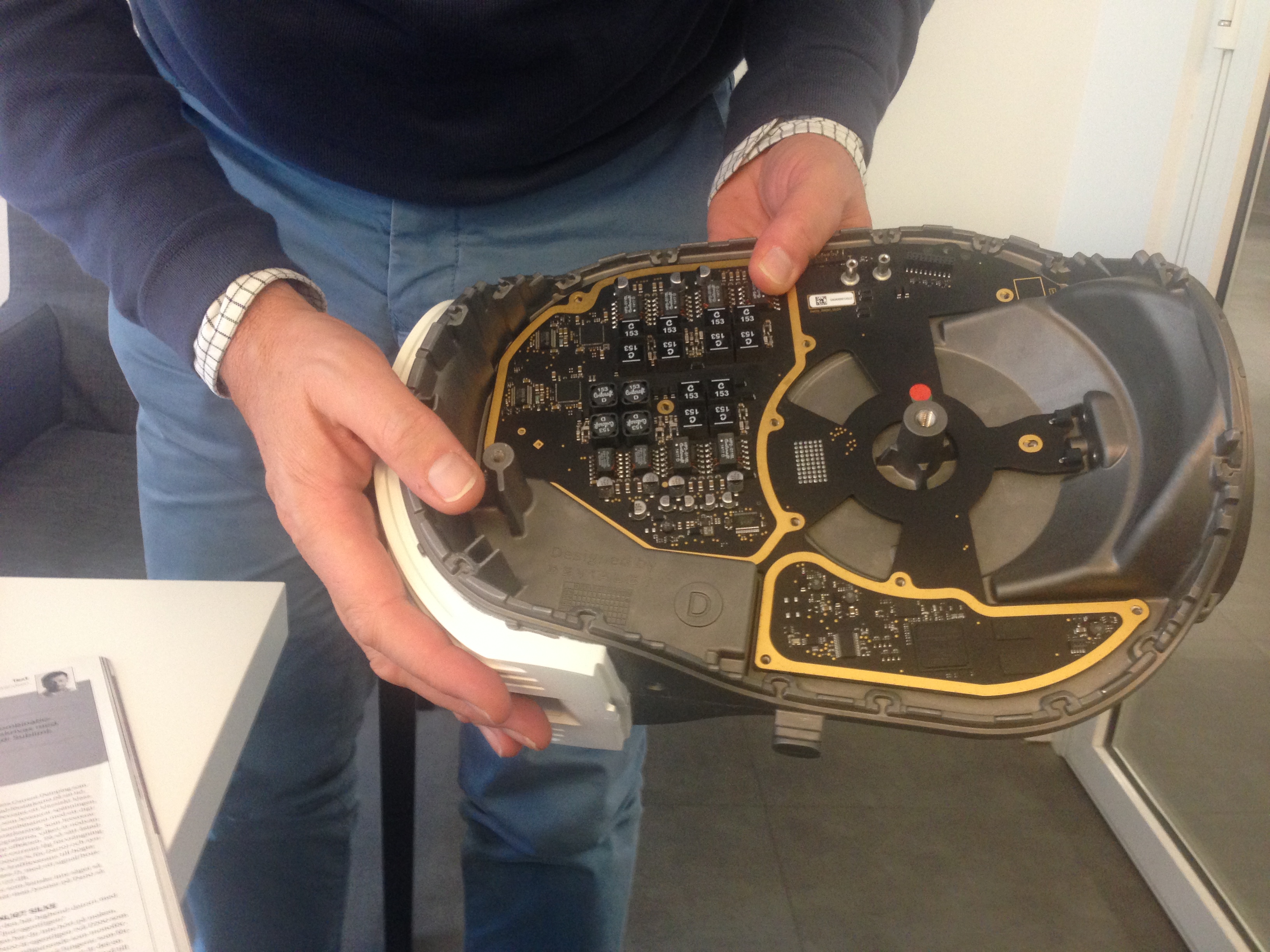 Above: Quentin Sannié, CEO of Devialet, shows off the inside of the Phantom speaker.

Perhaps the Phantom’s most striking design feature, however, is the two pulsating speakers that rapidly expand and contract, producing a hypnotic effect on listeners.

The result of this Apple-like obsession with technology and design is a gorgeous object meant to be shown off, rather than hidden away in a home. And that, coupled with its overwhelming sound, is intended to create a profound, shared experience among music lovers that encourages them to take off their headphones.

“You can provide so much more emotion through the same music when you can hear all the details,”  Sannié said. “I believe people are waiting for this product. Headphones cannot be the solution for listening to music and sharing it with others.”

The company debuted the Phantom at CES earlier this year, and had been slowly offering demonstrations around the world, leading up to its official debut last September. Certainly, the reviews and reception to the Phantom’s quality have been overwhelmingly positive.

In an exhaustive review, Wired magazine wrote: “What can be said with certainty is this: The Phantom is a technological tour de force. There’s no other system on the market that puts out this kind of sound for this kind of money. That it can be toted around from one room to another, like a revolving art show, is a small miracle.”

Of course, reviews are one thing. Sales are another.

The company faces its share of skeptics who wonder about things like the price. For context, the most expensive product from rival Sonos, which has a strong name in the consumer market, is still only around $900. And Bose, a name with a long history in audio, also offers a broad range of wireless speakers for far less.

Greg Weaver, a senior writer for Absolute Sound, said the Phantoms have gotten a strong reaction from audiophiles, but he worries that the product is priced out of reach of most users.

“It’s a splendid product,” Weaver said. “But it’s quite pricey for the average user. The audiophile crowd is into it, but they only buy about one percent of the audio gear. And this isn’t a product for the masses.”

Devialet must also push back against the general cultural trend that favors the private experience of listening to music on headphones, according to Billy Hulkower, senior technology analyst at Mintel. And when people do want to listen with friends, quality is not always a big issue.

“You can’t get decent audio through a phone’s speaker,” Hulkower said. “But frequently I’ve seen in public, young people, when they want to share their favorite song with friends, unplug the headphones and play it on the phone. It’s the worst listening method possible made by man. But it’s a disturbing trend among teens and young adults because it just doesn’t seem like the audio quality matters to them.”

Sannié knew these questions and criticisms would come. He insists the company can create a new market niche, and, in the process, take the Apple approach of creating a premium product and brand that will convince people to pay more for a unique experience.

“We believe we can create a new premium category,” he said. “It’s like an Apple computer. You can buy another laptop for $600. But you want to pay more for Apple because of the quality.”

To help get that message out, Devialet raised $20 million earlier this year from a consortium of European investors. After CES, Devialet executives also started making tours of Silicon Valley and Los Angeles to get tech and music influencers on board.

That strategy helped build a strong buzz over the summer. In the tech world, notable names have been talking up the Phantom, including Android founder Andy Rubin, who bought 50 of the speakers. In the music world, celebrities have raved about the Phantom on social media, and posed for pictures with the Phantom.

Today #Phantom got a little lovin' from the amazing http://t.co/1cVX9p2qu1. Thanks @iamwill for stopping by #devialet pic.twitter.com/mbAnTK3EGq

The company plans to start opening its own boutique stores across the U.S. in 2016, and was recently featured in the Amazon store. But the exposure that will be generated by Apple placing Phantom speakers in all of its stores next year is tremendous.

That in-person experience is just the kind of opportunity Devialet needs for potential buyers to see, feel, and hear the quality of the Phantom. Back in France, Devialet has partnered with a Toulouse-based startup called Demooz to create more opportunities for curious consumers to test-drive the Phantom.

Demooz lets people who own gadgets of some kind (VR headsets, smartphones, etc.) serve as “ambassadors.” People who want to try the devices can make requests to owners, who then arrange a time to meet and give a demo. In this case, Devialet has provided seven Phantoms so far to people selected by Demooz to serve as ambassadors across France.

Devialet recently participated in a meetup of Demooz community members in Toulouse, organized to sample connected music devices. Three Phantom speakers were set up in the front of the room, pumping out music as Demooz founder Geoffrey Vidal demonstrated how to adjust the sound via his smartphone.

A large crowd gathered around, watching Vidal. They stood silently, clearly mesmerized by the sound and the vibrating speakers. Just the kind of sensation that Devialet hopes will be contagious.

“I can’t describe exactly the way I feel about it,” Vidal said of the Phantom. “It’s powerful and precise, and when it starts, our members cannot stop staring at it during demonstrations. You really must live the Phantom experience to realize how incredible it actually is.”