Ian Dallas has a knack for coming up with weird but creative stories for video games. His first game, The Unfinished Swan, was one of my favorites of 2012. Now, his Giant Sparrow studio is working on an equally bizarre game called What Remains of Edith Finch.

It is a haunting tale about a cursed family in the state of Washington, and how each member of the family dies. It takes place across generations, but each tale involves something to do with the Finch home. Dallas told me about the game’s ongoing development at the PlayStation Experience event in San Francisco last weekend. With The Unfinished Swan, his team didn’t figure out the ending until late in the process. This time, he isn’t even trying to create the ending until he is further along with the stories of each family member.

While some bigger games have to be written in stone before production begins, Giant Sparrow’s team is smaller and it is able to be more flexible in its creativity. Dallas freely admits that he doesn’t know the destination, even though he is pretty far down the road in building the game. Here’s an edited transcript of our interview.

Ian Dallas: It’s a collection of short stories about a cursed family in Washington state. Each story is about a different family member and how they die.

GamesBeat: And you got the idea how, again?

Dallas: It came from weird fiction, is the primary source. People like H. P. Lovecraft, Lord Dunsany, Algernon Blackwood. Mostly short stories about surreal, supernatural events. Also a healthy amount of the Twilight Zone and guys like Luis Bunuel — Discreet Charm of the Bourgeoisie, movies like that.

Actually, the original inspiration was what it feels like to be underwater. I started scuba diving in the Pacific northwest. The feeling I had seeing the ocean slope away, not being able to see where it goes, feeling like you’re so far out of your depth, this tiny little insignificant speck. Trying to make a game that was about the sublime, but in a slightly terrifying position. In a very large nutshell, that’s it.

GamesBeat: What genre would you put it in?

Dallas: Sublime horror? If I could make a genre, that’d be the one. Something that hopefully speaks to the bizarre and cold beauty of the universe. Lovecraft talks about that a lot, but it’s really hard to do that with Lovecraft now, because everything is so much about tentacles. It’s become very set. So it’s trying to make something that still feels like it has a lot of unknowns in it.

A lot of the value in what we do comes from how it’s something out on the periphery. It’s unusual. That’s an important value, an important part of what we’re doing, so everything is optimized around trying to keep the process pretty flexible. There’s a window. Like in Indiana Jones, the door that’s coming down?

It’s a funny situation, where the farther you get into development, the more you know about the game, and the better your tools are for enacting your changes. But you have less time to make changes and those changes can be more costly. It’s almost like Cassandra. In Unfinished Swan, we knew the game was a bit too long for players. We had a fix. We’d just take part of the city, get rid of it, and then smoosh these two areas together. But there wasn’t time to enact it.

GamesBeat: I went to Pixar once and saw how it made movies. In contrast to video games, their filmmakers script everything out frame-by-frame. By the time they give it to the artists to start the rendering work, they can’t make any changes. They did make a few changes in Monsters University, where they changed the villain from a male to a female, and it apparently cost them an ungodly amount of money. Yet they’re known as so creative. It’s an interesting contrast.

Dallas: It’s a bit like a train. You have the tip of the spear, the people making the design decisions, and then there’s a very long tail of work that comes after that. I saw a video a while ago about Monsters Inc. in development. It looked so rough. I was blown away that would be the final animation. Seeing the animation in a Pixar movie without all the finished models and visual effects, it still looks like a student project. The motion is really nice, but all the other parts—

For us one of the things we’ve tried to do as we’ve grown the team — we’re up to 16 people now – there’s a lot of work that has to be scheduled every week. We try to have parts of the game that are more well-understood, especially the art investment — that’s a part you can never get back. If someone models a record player and you’re like, “No, we’ll set the story 50 years earlier, before that was invented,” there’s no used for that model anymore. It’s just lost work. With programming there’s a bit more re-use.

Having the house has been a nice safe haven to soak up work. When there are times where design doesn’t really know what to do, or we’re making something that we think might change, we can throw artists at making bedrooms. We can split the tasks up and move people around. 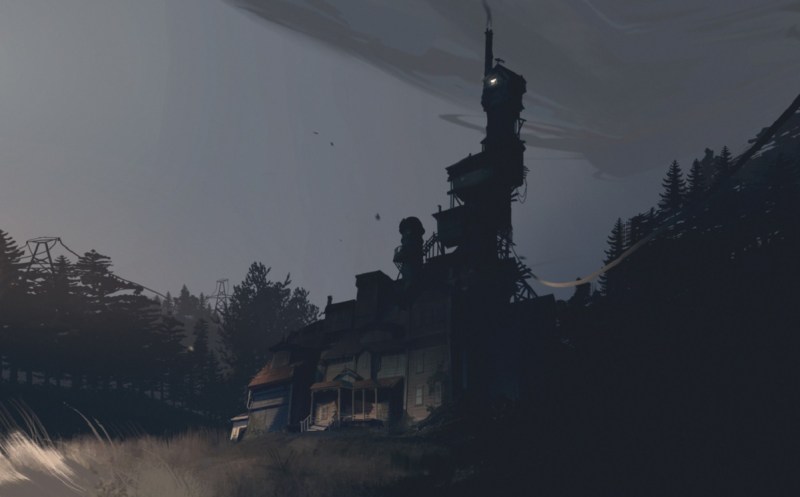 Above: The Finch house in What Remains of Edith Finch.

Dallas: That was one of the reasons we initially set it up as a series of short stories, stories about a family. The feeling was that we could toss things off the back of the bus, if needed, to lighten the load. That’s still kind of true. But we’re now at a point where we have such a large family, with all these interconnections, that removing one piece — it’s not impossible. We’ve cut story recently. But it requires some deft changes to suture the wound.

In the end there are places where we’ve cut things and the game is better for it. Things fit in ways that weren’t obvious in the beginning. It’s a weird paradox. As you go farther into development you’re able to make these sweeping cuts and changes that make the game better, because you know so much more about the game is. It’s like being a surgeon. You know the cuts you can make that will help the patient. Earlier on you’re just fumbling around and you’re as likely to kill the patient as save them.

GamesBeat: On a lot of games, people start preproduction and do a lot of early prototyping. They seem to cut that off around six months in and then they know what they’re going to do. That doesn’t seem to work for you.

Dallas: Yeah. There are days where I wish we’d just added a couple of years where we were still three or four people. But it works okay for us. What’s interesting about the games we make is that they do have a large team associated with them, so we can make things that have a sense of grandeur to them. You wouldn’t be able to do that with just a couple of people.

The balance we’ve found for this game is to have stories that are in rolling development. One story will be a super early prototype. The artists and tech artists will be involved for a few days making some prototype stuff, because it helps us understand the story to have a few things arted out. But then the rest of the team is on stories that are more well-defined. Of course, the problem is that if design lags a bit, you get this logjam of people waiting for work that’s not set yet. That’s where we try to do more stuff in-house and balance it there. But the stories are little prototypes in various phases, going right up to the end.

That’s partly intentional, based on the experience of Unfinished Swan. We didn’t really have an ending for that game until a few months before we were meant to be done with it. I think the game was better for that. Like I keep saying, the farther you are in development, the more you know what it feels like to play the game, to have the experience of seeing all of these sequence—you know where people are mentally and what they’re concerned about. In Swan we were able to create an ending that played into where people were. We were working with the grain.

In the beginning, for me—I think I know where I’m going to go, but I’m so wrong. For this game we didn’t even really try. We had some ideas for where the ending would go, but that’s something we’ve deliberately postponed so we can make something that feels like it nicely wraps up, or doesn’t, all the various threads we’ve created earlier on.