When Star Billions begins, humanity is already in a bad way. Earth is long gone. The few million remaining humans travel through space in a cryogenic ark. All their hopes for the future rest in the hands of four overwhelmed A.I. crew members — and, through a quirk of time and space, you.

Out now for iOS, Star Billions puts you in the role of arbiter. Each adorable member of the crew of the spaceship Little Brother has been programmed with a specific strength–intelligence, resourcefulness, military might or diplomacy. Each also has opinions about how they can use those strengths to get through just about any scenario. But they need you to make the call.

In practice, after you observe a scenario, each A.I. will suggest a possible step to take next. EIN offers data-driven solutions. SARGE wants to shoot his way through everything. ROSIE finds creative uses for the Little Brother’s resources. And LACIE has the right words for any encounter. You weigh their suggestions and then choose the best representative to handle each scenario.

That’s pretty much it.

But while that may not sound like much, indie studio Catch & Release has taken a risk with Star Billion’s presentation that makes it feel like more than a fairly linear visual novel. It plays out in semi-real time, calling you back for more input after a break of anywhere from a few minutes to a few hours. Since your choices take a while to play out, the artificial time constraint gives you space to wonder about the outcomes–and to get attached to the crew of the Little Brother. 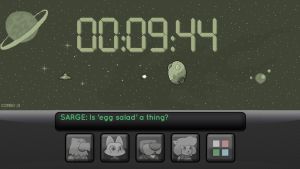 Above: Pass the time in Astro Whiz

Strangely, you don’t need to leave the game in order to pass the time: between scenarios, it drops you into an ultra-simple arcade game called Astro Whiz. You can blast asteroids in your ship’s path while the clock ticks down until your next encounter, and each asteroid you hit knocks a bit of extra time off the clock. The most dedicated high-score hunters could probably play the whole game through in a couple hours, but it would hardly be a rewarding experience.

It’s better to experience the story at the intended speed, dipping into Astro Whiz just enough to shave off a few minutes and catch the extra bits of inter-crew banter that accompany it. That banter is one of Star Billion’s strengths — when you aren’t making decisions for them, it’s fun to watch the crew members clash or come together. Their personalities are simple, but they have an earnest sort of charm.

The story fares quite well while it lasts. The Little Brother’s crew haplessly stumbles from one crisis to the next, but they’re fun crises that don’t dip too deeply into space opera tropes. All too early, however, the story falls into a headlong rush for the end. Opportunities for interactions dry up, and it skips over interesting world-building opportunities in order to reach a sudden cliffhanger. The tense pace works for Star Billions’ storytelling, but not for its gameplay.

If further episodes materialize, it may have a satisfying conclusion — for now, the final moments are a lot of buildup for little payoff. A few emotional moments and tantalizing hints along the way may not be enough to keep players hanging on for a future continuation.

If you’re really into Astro Whiz and you want to unlock every hidden bit of backstory, you might want to play through a second time. It can be entertaining to see how each A.I. handles a given scenario. Just be warned that the repeat experience might disappoint. Peeking behind the curtain can be rough in any choice-based game, and Star Billions is no exception. If you want to feel the impact of your decisions, it’s best to play through once and stop there.

The market has room for a space opera that experiments with player choice, particularly one as charming as Star Billions. For a little while, you’ll have a crew of animal A.I. friends to check in with and watch over, and that’s an oddly pleasant thing to have. Charm might not take the game quite far enough, but it’s a solid start to a story that will hopefully arrive at an interesting conclusion someday.

Star Billions is now available on iOS. The developer provided GamesBeat with a digital copy of the game for the purposes of this review.