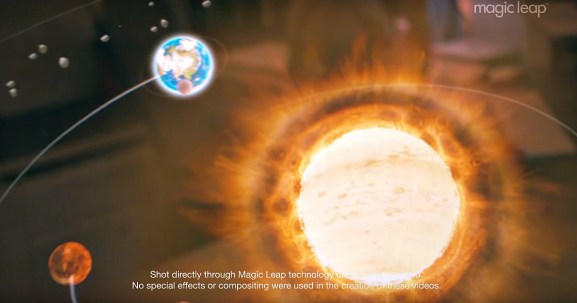 Augmented reality startup Magic Leap is reportedly raising $827 million in a third round of funding, according to Forbes.

If it succeeds, it will be a strong signal of investor confidence in the fledgling technology, which can overlay animated imagery on the real world using glasses with special displays. Augmented reality is expected to become a $120 billion market by 2020, according to tech adviser Digi-Capital.

The third round of funding, if completed, would bring the company’s total investment to date to $1.4 billion, making it one of the most funded startups in the world. GamesBeat has also heard that Magic Leap is raising money, but we don’t know more details. The company hasn’t commented yet, but Forbes cited a regulatory filing located by VC Experts.

The Florida-based Magic Leap raised $50 million in February 2014, and then it raised another $542 million later in the year in a round that included Google as an investor. Other investors included Qualcomm Ventures, KKR, Vulcan Capital, Kleiner Perkins Caufield & Byers, Andreessen Horowitz, and Obvious Ventures.

Magic Leap wants to create “cinematic reality,” or “mixed reality.” It wants the animations before your eyes to be so real that you won’t be able to distinguish them from real objects. It’s not quite there yet, based on demos such as the one below.

But if the company can achieve that, it could have some far-reaching consequences, and not just for games.

Tim Sweeney, the chief executive of Epic Games and a graphics guru, has visited Magic Leap and seen its technology under an non-disclosure agreement. He said that they were doing things “that I didn’t think were possible.” At the recent VRX event in San Francisco, I asked him about that.

“Who’s heard about the Xerox PARC laboratory from the ’60s and ’70s?” Sweeney said. “It was before my time. But I feel like what I saw there, it was like an extension. I hadn’t thought some of that stuff was possible, but they were doing it right there. They had the devices in their lap. They were making it work. It felt like if you teleported back to 1972 and saw the first mouse, the first graphical user interface, the future of computing right there. This is probably happening in a lot of other places besides Magic Leap that I haven’t seen. But that’s part of the revolution that’s happening right now.”

Sweeney noted that, in perhaps a decade, we could have perfect augmented reality. At that point, he said, we wouldn’t need screens of any kind anymore. If you have the equivalent of a 40-feet screen in front of your eyes all of the time, you don’t need a TV, a smartphone, or even a movie theater. Those things might persist for social reasons, but the quality of what you see in front of your eyes would likely be better.

Magic Leap opened in 2011, and part of the reason it has to raise so much money is that it has to develop the special displays and other hardware. Google is clearly investing as a hedge against the success of virtual reality and Oculus VR, which rival Facebook acquired for $2 billion in 2014. Facebook’s purchase kicked off a frenzy. Some 234 VR startups have raised $3.8 billion and created an enterprise value of $13 billion — with only one platform launch (the Samsung Gear VR) so far, according to VB Profiles.

Digi-Capital, however, believes that augmented reality will be four times bigger as a market than the expected $30 billion VR market by 2020. That’s because it could be more far-reaching and useful on a moment-to-moment basis compared to VR.

“We’re fundamentally a new kind of lightfield chip to enable new experiences,” said Magic Leap chief executive Rony Abovitz at a conference in June. “There’s no off-the-shelf stuff used. That’s the reason for the amount of capital we’ve raised — to go to the moon.”

Graeme Devine, a well-known game developer, is Magic Leap’s chief creative officer. He spoke at our GamesBeat 2015 conference in October about joining the company.

Devine said, “Rony Abovitz, the CEO, called up and said, ‘I think I need a games guy.’ ‘OK? Where are you?’ ‘Florida!’ ‘Not interested.’ Then he calls up again and has me sign the NDA. He sends me a video of the technology. I said, ‘That is impossible! You can’t do that! You can’t insert characters into environments with occlusion and things. I’ll come to Florida.'”

He added, “I went down to Florida and took a look. I stuck my head into this machine that was about the size of a refrigerator. Right away I’m thinking of that movie Brainstorm. Once I joined I had to buy everyone in the company that Blu-ray, because apparently nobody’d seen it. There was a monster running around the desk in front of me. It was this blue monster, and I could control it with an Xbox controller. It was looking just like it was real, on the desk. I’m thinking, ‘That is weird!.’ Then, in the back of the room, a much larger monster stood up and waved at me. I hadn’t realized it was there to begin with. I didn’t notice that monster.”

The point was that Devine couldn’t tell the animation from the real, for a moment, and, he said this is what it means to “make content in mixed reality.”