Yahoo has launched a mobile app aimed at helping you find which video-streaming service your favorite TV show or movie is appearing on. The Yahoo Video Guide is an iOS and Android app akin to the TV Guide of yesteryear, but modernized to account for the cord-cutting generation. 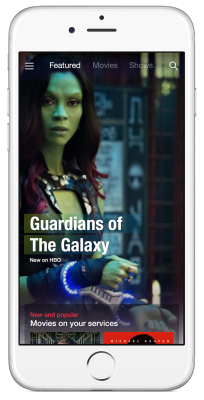 “We believe that there’s a rapid shift in people’s time on video, from one box in the home to over a dozen streaming services that are ubiquitous for devices and mobile,” said Robby Stein, the senior director for product management at Yahoo. And he’s right, especially as more people no longer find a need to pay for cable from the likes of Comcast, Verizon, and Time Warner.

Just look at the results from the second quarter of this year: The Pay-TV sector lost 566,000 customers in the United States with an annual rate of shrinkage of 0.7 percent, compared to 0.1 percent a year ago, according to analyst Craig Moffett. So as more people are converting to streaming services, there has to be a way to find out what’s being shown on which service and app — enter Yahoo’s Video Guide.

Bearing some similarities to Dijit Media’s NextGuide app, Yahoo’s newest standalone app isn’t the be-all, end-all for streaming services. It’s just the starting point for you to discover shows and movies. You can look on the app to find out what’s airing and on which streaming service. When you find a show or movie you want to watch, tapping on it will open the corresponding app. 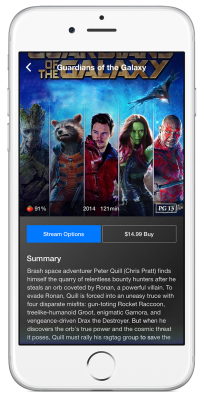 It does not do anything with user-generated content pulled from YouTube or Vimeo, nor is Yahoo’s own content included (sorry, no Saturday Night Live unless it comes from somewhere else). The app will not accept credentials to third-party services, and Stein said Yahoo will not look at your data.

But while we’ve referred to it as a TV guide, Yahoo’s Video Guide offers more than a static listing. It also offers new ways to discover shows, starting with the mood that you’re in. The app has a “Mood Picker” feature that will provide shows and movies based on whether you feel happy, sad, or angry — just choose the corresponding GIF. 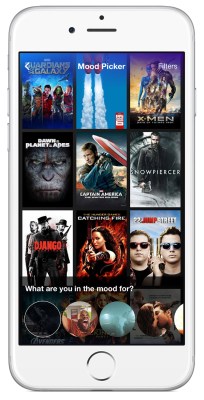 Stein told us there’s also an algorithm to surface new title recommendations. Based on factors like recency, quality, and popularity of titles, the app will display notifications about shows you may find interesting.

The activity you take within Yahoo’s Video Guide is also examined, but it does not look at what you’ve done within the streaming service apps. These aren’t meant to be personalization features — in fact, at launch, the app doesn’t offer any of this capability, just basic recommendation features.

You might not think Yahoo’s Video Guide app is necessary, but Stein thinks that with a growing number of people “cutting the cord” and turning to streaming services, it’s helpful. In a time when people have an average of three or more of these services, such as Netflix, HBO Go, and Amazon Prime, we’ve reached a “tipping point where people are daisy-chaining a bunch of apps together to get the videos they want,” he said. Yahoo’s newest app is a way to bring order to that chaos.

The app is only available on mobile devices and won’t require a Yahoo ID. At launch, ads will not be shown to users, although there’s a possibility that this could come in the future. The Yahoo Video Guide is now available for download in the United States.