Sometimes gaming genres die. Sometimes, developers and players all hop off a trend together and a certain kind of game that was once ubiquitous fizzles out. It looks like that’s what happened to fast sci-fi racing games — or it would have if it weren’t for the Germans.

Fast Racing Neo, which is out now for $15 on Wii U’s eShop downloadable game store, is an ode to the former giants of hyperfast racers. It features echoes of Wipeout and F-Zero in an age where Nintendo is no longer making F-Zero games and Psygnosis, the developer responsible for Wipeout, no longer exists.

So, for fans, Fast Racing Neo represents not only a return of a style of gaming that we don’t get as often as we once did, but it is also a chance to prove to Nintendo and Sony that gamers will spend money on games that play like this. That’s a lot of pressure to put on Fast Racing Neo. But it turns out that independent developer Shin’en Multimedia, based in Munich, Germany, is up to the challenge.

To qualify as a successor to F-Zero and Wipeout, you need a few essential ingredients. Your game should have physically impossible tracks. It should feature a thumping techno soundtrack. And it should make you feel like you are going so fast that you risk tearing a hole in spacetime. Fast Racing Neo has all of that, but it truly excels at providing an unparalleled sense of speed.

Even when you first boot up the game and it limits you to the Subsonic League, it is faster than any other game this generation. But you haven’t seen anything. Impossibly, the two other modes take things from merely ludicrous to “I am become speed, destroyer of corneas.”

At its quickest, Fast Racing Neo gives you the sensation that the Wii U GamePad is going to fly out of your hands. Shin’en accomplishes this feeling by maintaining a firm 60 frames of animation every second, but the developer also deploys a number of tricks like visual blurring and warping to make your brain think you are approaching hyperspace.

This game made me realize that I’ve missed speed.

Burnout Paradise, a game from 2008, traded in this. More recently, Mario Kart’s 200cc mode peppered in a dash of Wipeout-ness (it even introduced F-Zero-themed karts and levels). But Fast Racing Neo is the real deal, and it delivers.

But it’s more than just speed

If Fast Racing Neo was just about reaching an inexcusable velocity, I’d be into it. But Shin’en delivers something more than the “vroom vrooms.” It builds on top of that animalistic craving by borrowing from the classic shooter Ikaruga.

In the 16 tracks in Fast Racing Neo, you can boost at any time as long as you’ve collected enough of the on-course powerups. You can also hit a pad that’ll also fling you forward but only if you are in the right “phase.”

At any time, you can tap a button to change your ship from blue to orange and back again. These are your two phases, and if you cross an orange pad while you are in the orange phase, you’ll get a series jump in speed. If you cross when you’re the opposite color, however, and boost will actually slow you down.

This creates a dynamic where you are constantly trying to maintain your speed and a rhythm with the course. Shin’en doesn’t shy away from throwing multiple different colored boosts back to back. To navigate this, you’ll have to stay on your toes. You can’t lay on the gas and let the game play itself like a roller coaster. Instead, you’ll need to lean forward and engage with each course on its own terms.

And when you do lean forward, you start to notice the tiny but important differences between the various vehicles. Sure, this one has faster top speed and quicker acceleration, but it’s way heavier. That’s going to hurt me when I’m trying to make tight turns or quick jukes from one side of the track to the other.

This sort of planning and scheming makes Fast Racing Neo something of the “thinking person’s F-Zero.”

The point of going fast is that it needs to feel risky. And while Shin’en nails the visual sensations of going quickly, the crashes are lame and prevent you from really feeling like you’re in danger.

When you crash — which happens most often when you fall off the track or hit an on-track obstacle — the physics just sort of fall apart. Sure, you get a penalty. You’ll go from first place to nearly last in a moment. But it just doesn’t look great. It’s like you see how hollow your ship’s model looks. This means that your crashes don’t feel jarring or damaging, they’re just annoying.

So, as I go through a part of a track that has giant windmill-like fans I have to pilot through, I don’t really feel the danger of that action. This kind of driving should scare the hell out of me. But I don’t really feel anything during these portions of the tracks other than a vague desire not to lose my position on the leaderboard. 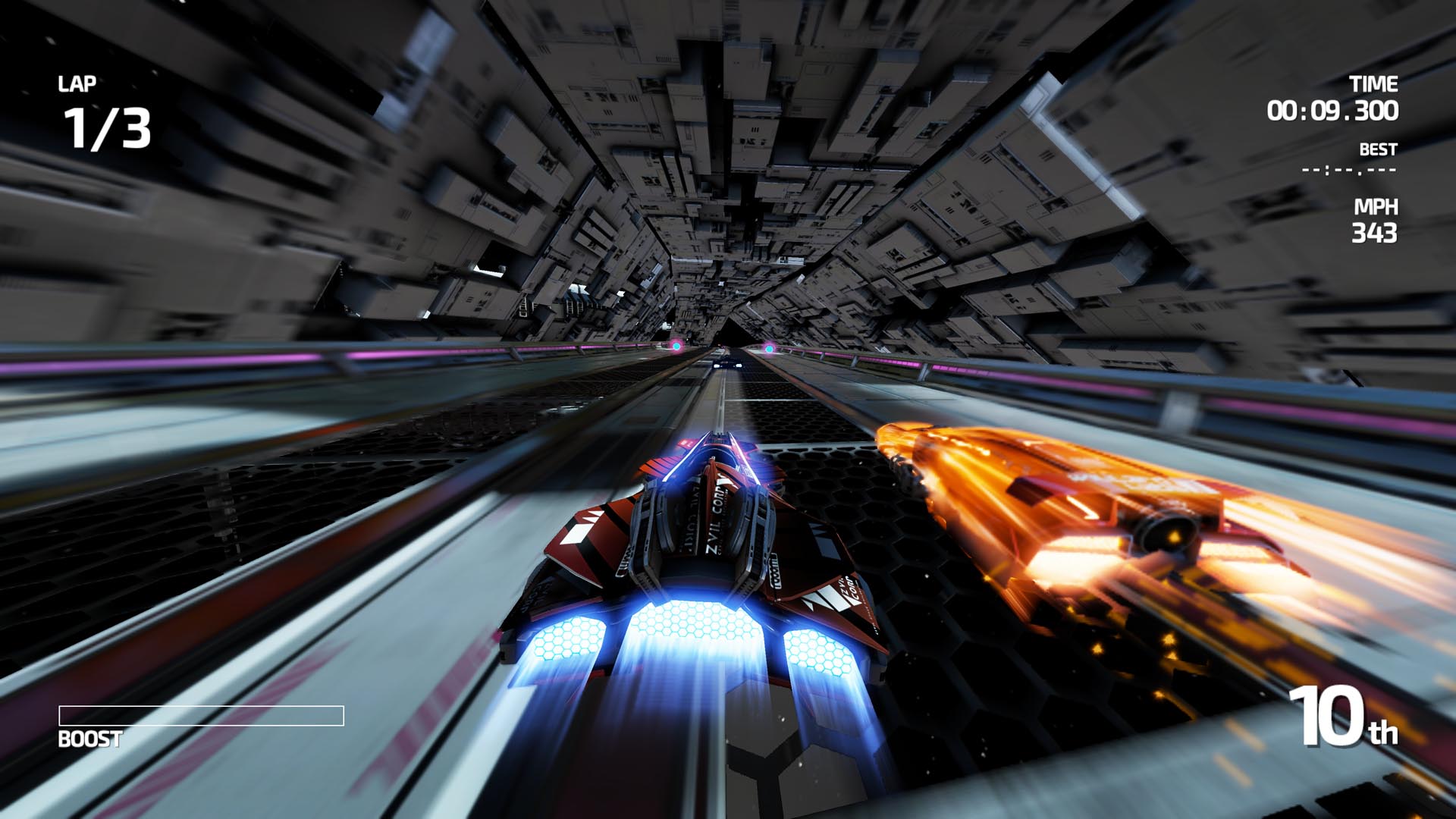 Above: Fast Racing Neo is pretty and detailed for a Wii U game running at 60 frames per second.

I love that this game exists. It checks the boxes that it absolutely needs to hit.

A sensation of speed that doesn’t seem possible? For sure.

Fast Racing Neo coming to the table with just those elements already makes it a winner. But the phase shifting on top of that adds a layer of complexity that I found rewarding and keeping me coming back for more — especially online where a mastery of the tracks gives you a distinct advantage.

Now, is this going to please F-Zero and Wipeout fans? Fast Racing Neo is closer to the latter than the former, and I’m betting that this game will only make fans want a new F-Zero and Wipeout even more. But for those of them that pick up this game, they’ll find something that does a fine job of addressing a style of gaming that other developers and publishers are ignoring.