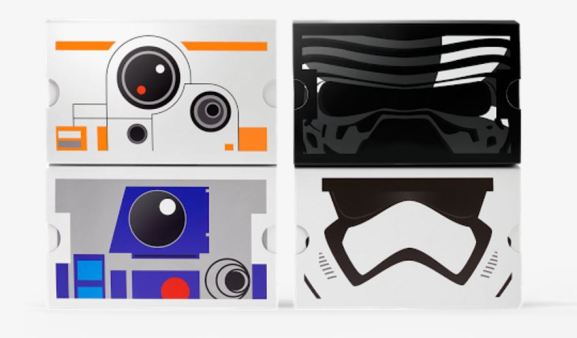 Updated at 11:25 Pacific time: They are already all gone. Hope you were able to get one.

Google is continuing its marketing partnership with Lucasfilm, and this time it is giving people a free way to view basic virtual reality content.

To promote the impending release of Star Wars: The Force Awakens, which will debut in theaters around the world December 18, Google is giving away its Cardboard virtual reality phone holders that feature designs from the movie. You can choose from the droids R2-D2 or BB-8 as well as the villainous Kylo Ren and a First Order Stormtrooper. After you select your favorite, you’ll just need to give Google your information, and the company will ship you the device for free — this is a good deal considering you usually need to pay around $15 to $25 to get a Cardboard-like device from a third-party. You can only pick one per Google account, and the supply probably won’t last, so you should head to the Google Store right now if you want one.

Google Cardboard is the company’s rudimentary technology that turns most smartphones into basic virtual reality goggles. The name, Cardboard, is apt since the phone holder is made out of the cheap packaging material.

Previously, Google has given away Cardboard online and at events — we got one at the Game Developers Conference earlier this year, for example — but this is the first time the company has used Cardboard as a way of marketing something like a film. But it is an interesting idea since virtual reality is such a hot concept and since Lucasfilm and the special effects masters at Industrial Light & Magic are using VR technology to promote The Force Awakens.

Cardboard isn’t on the same level as something like the Oculus Rift or even Samsung’s Gear VR, which is also a phone-holding head-mounted display. It only tracks the turning of your head where more advanced VR systems also know where your body is moving. But Cardboard is a fine way to experience why everyone is excited about VR, and it’s hard to beat the price.