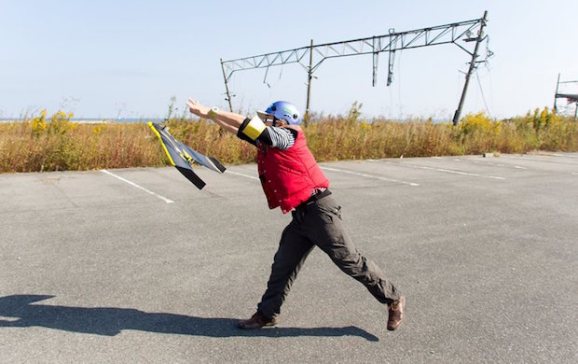 The team is led by Aoyama Gakuin University Department of Global Studies and Collaboration Professor Taichi Furuhashi, who is well-known as an expert on Geographic Information System (GIS). Setting its fundraising goal at 40 million yen (about $325,000), it has already raised 2.5 million yen (about $203,000) at this point three days after the launch and will continue the campaign till 2nd February of 2016.

Drone Bird was selected out of 139 application entries for a project-collecting campaign on the ReadyFor crowdfunding site last year.

Crisis Mappers Japan has been engaged in activities of mapping the damaged state onOpenStreetMap based on satellite photographs when natural disasters occur, for the purpose of making use as lifesaving or supporting activities. previously, the first problem of its method was that it takes more than two days to complete mapping although immediacy of information is strongly required upon disasters. Therefore, the team started to form the plan of Drone Bird, which is to arrange state-of-the-art drones and their operators in ten places around Japan in order to collect image data of the damaged state rapidly. The plan aims at aerial photography and publicizing the information acquired within two hours from the time of a disaster occurs anywhere in Japan.

Crisis Mappers Japan has been engaged in making accurate maps after disasters in cooperation with volunteer mappers from all over the world, having contributed to relief activities by the United Nations, the International Red Cross, and other organizations in the 2010 Haiti Earthquake, the 2011 Great East Japan Earthquake, as well as the 2015 Nepal Earthquake by offering them up-to-date information. In the 2015 Nepal Earthquake, aerial videos using drones were shared on the Internet, helped the world understand the situation in affected areas and drove them to offer helping hands.