Health2.0, started in California in 2007, is the global conference introducing the latest technologies and advanced solutions in the medical and health sector. The conference washeld in Japan for the first time over a two-day period of November 4 and 5.

Five prominent startups from Japan challenging the sector each with own style entered the Afternoon Pitch Competition posited on day o.

The judges for the competition were:

Symax analyzes urine by attaching it inside a toilet for analyzing health conditions. It enables early detection of lifestyle diseases such as diabetes and gout with 99% accuracy leveraging the original algorithm.

Some similar existing services cost no less than tens of millions yen (or tens of thousand US dollars). Compared to these, Symax is superior in the number of diseases it can detect and continous use at low cost. The company claims that this solution can discover 86% out of all different types of lifestyle diseases.

An individual user can also use it for 980 yen (about $8) a month while companies can use it for their employees’ health and adjustment of medical expenses by installing it it a building or facilities. Some high-class nursing homes and condo developers have shown interest in it because they can reduce an initial investment to about one-tenth that for conventional similar solutions which usually costs more than hundreds of thousand US dollars. Using the vital data collected, offers of data marketing business to health insuarance societies and companies are planned. 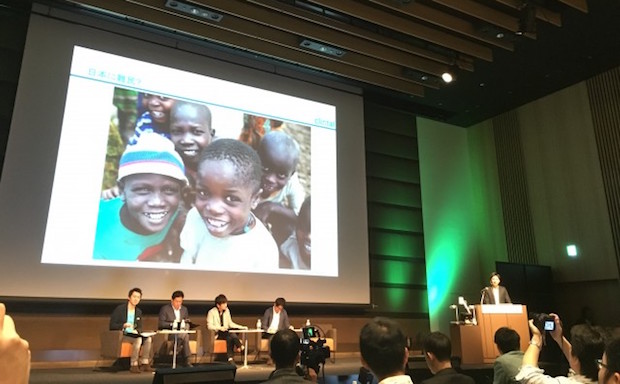 Over a million “hospital refugees” are being found in Japan; many patients feel anxious and dissatisfied about doctors’ explanations and treatment plans. Clintal is an online platform where doctors with optimal skills can be searched for such patients in accordance with their diseases and symptoms. They can see the list of skilled doctors just by selecting diseases and treatment departments.

Its characteristic is that it is searchable not by hospital units but doctors, using both qualitative and quantitative data for selecting skilled doctors and evaluating accessibility to such doctors. Regarding the recommendation service, it provides a skilled doctor’s details in about a week’s time after inputting information from the web form. It deals with subjects such as increases in medical expenses and medical quality improvement, as these are becoming social problems in Japan.

Though a question considering resistance to doctors’ achievement disclosure was tossed by the judges, high evaluation has been given by doctors with positive and cooperative attitude can be seen for improvement of information accuracy instead. There are 500 skilled doctors listed on Clintal at this point and they aim to list the top 3 to 4% out of 250,000 doctors throughout Japan within a year.

Exiii explores a new form of myoelectric hand called Handiii using the 3D printing technique and the release of open source. Myoelectric arms are for people without hands for control with remaining muscles intuitively. As there has been no change in the function over a half century this kept the market small at several thousand people. Thus, customization needs for the size and shape of persons wearing an artificial hand have been hurdles.

Coordinating with various wearable devices, it analyzes the supplements which are necessary for user body. Then, the server prepares drinks according to the contents. The server also reads biomedical signals and produces an energy drink which fits each person who touches the machine itself when wearables are not in use.

38% of Japanese take some kinds of supplements today and its market amounts 1.5 trillion yen (about $124 billion) in scale. As the first stage, they have already started action to establish a sports gym next spring targeting people who go to the gym with high health awareness. And continuous sales are expected since the supplements of HealthServer are replenished by exchanging cartridges.

There are people who have mental problems in over 70% of the offices in Japan. Cocololocan visualize a mind condition not using wearables but with only smartphone which is familiar to us. It reads stress and relax numerical values with finger placement on the smartphone camera. The result is expressed as eight feeling types and the reliability of measurement accuracy is about 80%. Since its launch seven months ago, the app has acquired over 300,000 downloads to date.

After measuring the stress level, there is also a function which recommends music and spa coupons according to the stress condition. And as a stress check is going to be mandatory for enterprises from this December, the Cocololo team will also be providing solutions for corporations.

As you can see the five companies which made pitches this time provide a variety of medical or healthcare forms, approaches and targets. As technologies and devices develop in the future, data will be collected no matter what. The point is how to use them for solutions to solve people’s problems. Healthcare services are increasingly attracting interest; those within and outside Japan should be scrutinized from now on.