Taiwan-based social media analytics startup QSearch pulled in $73,000 in revenue last year. This year, the ten-person team is on target to make $300,000 — and next year, cofounder and chief executive Roger Do is forecasting $1 million.

That’s completely bootstrapped, with no outside funding, to date.

QSearch actually started out as a marketing analytics company, but quickly realized the real opportunity was to go deeper, executing “almost psychological-profile level analysis” of public social media data, the 42-year-old Do said. And this is not just in markets across Southeast Asia (it currently operates in five, including Malaysia and Taiwan), but around the world.

“Our market is actually political — political and governing,” Do said in an interview with VentureBeat in Singapore over the weekend. “We’ve been transitioning away from market-heavy into political-focused solutions for government, political parties, and ministries.”

QSearch grabs all the open-source and publicly available social media data from around the Web — comments, likes, shares — especially on major networks like Facebook and Twitter. The idea is to view it all through the lens of a global “online diary,” where public reactions and sentiment around events can be analyzed. This gives the QSearch team a deep sense of what social media users like and dislike.

“People tend to be unfiltered [online]. There is a very reactionary, instinctive, and truthful [sharing] of how they feel inside,” Do said.

Malaysia is a key market for QSearch. The startup was incubated at the Malaysian Global Innovation & Creativity Centre (MaGIC) accelerator, and still feels it has roots in the country. This year, it tracked social media sentiment during corruption accusations against the country’s current prime minister, Najib Razak.

The goal? To measure the “pure emotional intensity people feel” toward specific news and events. QSearch’s algorithms identify the most influential social media behavior (usually on Facebook) about a trending topic.

“It gives political parties or politicians a way to know who is influencing [their] reputation online,” Do said. “Mostly, they’re trying to identify semi-neutral influencers and get them over to their side by engaging them. This gives them a way [to do that].”

In the way that MailChimp is automating the marketing process, QSearch likes to think it’s automating aspects of the political process and the way campaigns are executed. The QSearch dashboard, for example, allows users to directly reach out to the manager of a social media page or launch a campaign targeting only those readers — “bypassing that editorial control.”

Hot or viral articles shared on social media can be surfaced by searching the QSearch dashboard for any given keyword. Content can then be generated by the PR department of a government to deal head-on with that influential content. A counter article, for example, could be shared through a promoted post campaign on Facebook to target only users who liked the page from which the original piece of viral content originated.

The analytics and algorithms displayed in the dashboard can show which fan pages around certain topics are slowly losing engagement with users, enabling a PR department to shift priority and invest more time in communities where engagement seems to be growing — or is at least stable. And they can target heavy-hitting celebrities who may only post a few times per month but command a loyal following and exert high influence.

These guys are known internally at QSearch as the “superstars.”

Word clouds, also available on the dashboard for any keyword, show the associated words that are being used alongside it on social media. Again, it’s about understanding and revealing sentiment around a topic.

As a second regional case study, QSearch’s data showed that Cheryl Yeoh — the chief executive of MaGIC, who announced she would be stepping down this month — has been the main driver of online conversation around the accelerator. Without Yeoh’s name in the social media search data, the amount of discussion about MaGIC plummets.

“Cheryl basically lent her branding to MaGIC to get it started,” Do said. “For most startups [in the region], Cheryl is MaGIC.”

In the way that a company would ordinarily log into a Google Analytics account to track page views on their web presence, private companies and government bodies can log into the QSearch dashboard to track influence and social media trends on topics they care about or have investments in. Do said that while Google is more about “visitation and behavior, we’re much more on the language level… Our roots are as a language company.”

Some government ministries that QSearch is working with now invite influential bloggers to meet with them once a month to discuss key issues. Do explained that this enables the blogger to get as much insight (or access to research, etc.) from the government’s perspective as possible, so that the online commentary he/she puts out can be as balanced as possible. He added that the government input is not about coercing them in any way. 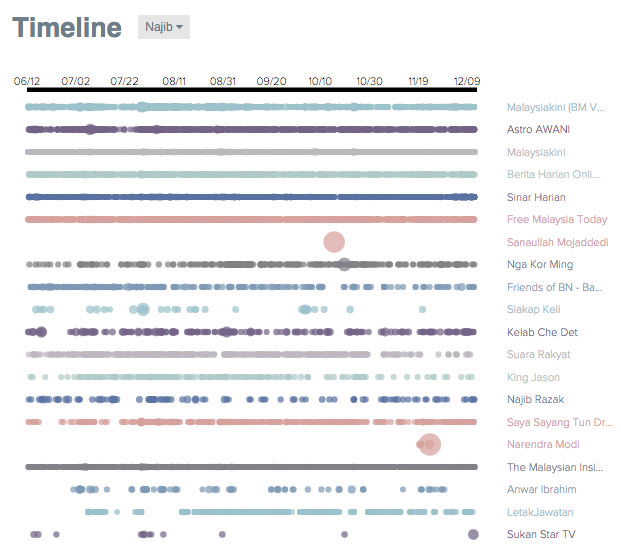 “We’re probably looking at a 70 percent profit [on revenue],” Do predicted, meaning that if the company is successful in generating $1 million revenue in 2016, he estimates it will take away $700,000 of that in spoils to enjoy and reinvest. Three new products under QSearch are also slated for release next year.

“We’ve come to a point where small is beautiful, and the aim is just to move fast,” he said, confirming no new plans to grow the team much beyond the current 10 in the next year. “The platform is still too much of a technology and not enough of a product. We’re trying to make the product easier and simpler, with statistical analysis that creates recommendations. So the client would not see the number any more, they would just see a recommended action based on the number.”

Startups like Lamplight Analytics, a young data analytics company in Hong Kong, overlap with QSearch in terms of the raw technology they’re building. But to get ahead and stand out in the space, QSearch believes the next step is around making sense of all that social data to auto-generate recommendations.

Coming back to politics, QSearch provided the platform to politicians during local elections in Portsmouth, England. It’s also exploring opportunities with a body in Geneva, Switzerland.

Right now, QSearch is downloading 1.7 TB of data per day, and can search data from the past 12 months. Required data is retrieved in about 30 seconds. Subscription to the service costs anywhere between $1,000 to $5,000 per month, depending on how many individuals are on an account (up to eight).

“How do we measure, package, and sell influence?” Do asked. That, in a nutshell, is what QSearch is working to discover. 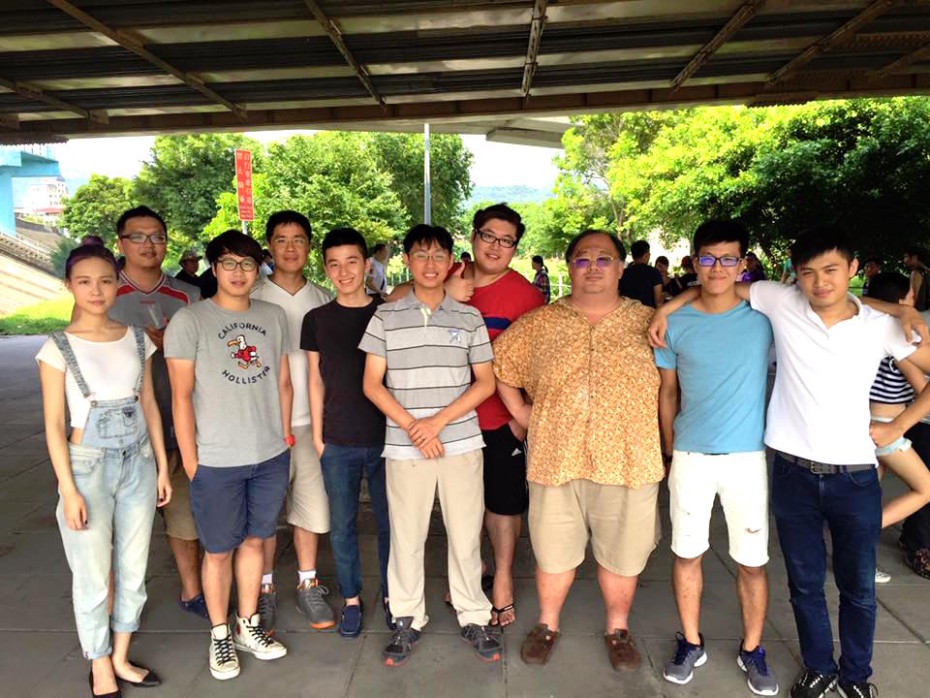 Above: Do, third from right, with friends

Fundraising on a Taiwan backdrop

One of the reasons QSearch has bootstrapped until now is because fundraising wasn’t easy to come by when it was starting out. Even with good revenue, investors were hesitant to back the model. At least part of that was because of the Taiwan label, which Do said can work against a young startup. Offerings from the U.S. and Europe are perceived as superior by many Western investors, despite their technology sometimes being inferior to what QSearch has been doing.

Beyond that, government support for startups in Taiwan exists — but not without major bottlenecks.

He continued: “There’s a lot of good resources, but really weird administrative processes that make no sense as a true entrepreneur. In six months, I can make $30,000. If I can’t, I shouldn’t be in this business… For me, on my ninth startup, that’s ludicrous… It’s a small piece of cheese with a huge ass hook in it.”

Do was born in Taiwan and went to school in the U.S., where he majored in Philosophy at UC Berkeley, followed by an MBA in Marketing and Strategy at UC Davis. At 20, he sold his first startup and spent a year binge-playing Counter-Strike with 2L bottles of diet Coke and char siu pork from Walmart. “I spent a whole freaking year [doing that]. Version 1.56,” he said.

In contrast to giants like Salesforce, QSearch believes in teaching clients how to ask the right questions to get the most out of all the data they’re providing, rather than just “dumping” it on them and saying, “Here you go.”

While the startup’s revenues have already reached a point where it can grow and survive with ease going forward, it’s still looking for a $2 million funding round in 2016 to really scale up the whole operation.

“We can run forever. We will not go out of business,” Do said. “I realize social media is an incredibly corrosive force against government power, and that scares me to some degree.”

He added: “Now, governments can’t do a huge infrastructure project because there will be so much opposition about the environment. Governments’ response time is slowing down, and the ability to take on huge projects is dying. In a rapidly evolving world competing with different countries or natural disasters, we need a tool where governments can rapidly create consensus and move forward.”

“From the same force that paralyzes the government, we’re trying to identify a way for [them] to create power and get shit done… without compromising liberty and freedom,” he concluded.