Guns Up! is a simple and interesting new entry in the free-to-play combat category. You would expect this kind of release from a gaming startup for mobile devices. But the side-scrolling strategy title comes from Sony and Valkyrie Entertainment, and it’s available now on the PlayStation 4’s PlayStation Network.

I found the gameplay to be quite fun and replayable, but the slow network response was frustrating. That’s a bit of a shame because Guns Up! — which is not so different from the enormously successful Clash of Clans in its appeal — is exactly the kind of experience that could bridge the enormous console and mobile game audiences.

The game combines single-player combat against artificial-intelligence attackers, along with asynchronous multiplayer combat where you attack another human player’s base. It’s appealing to hardcore players and possibly to broader audiences as well, and it’s targeted at people who need a break from the more intense and time-consuming offerings on the PS4. 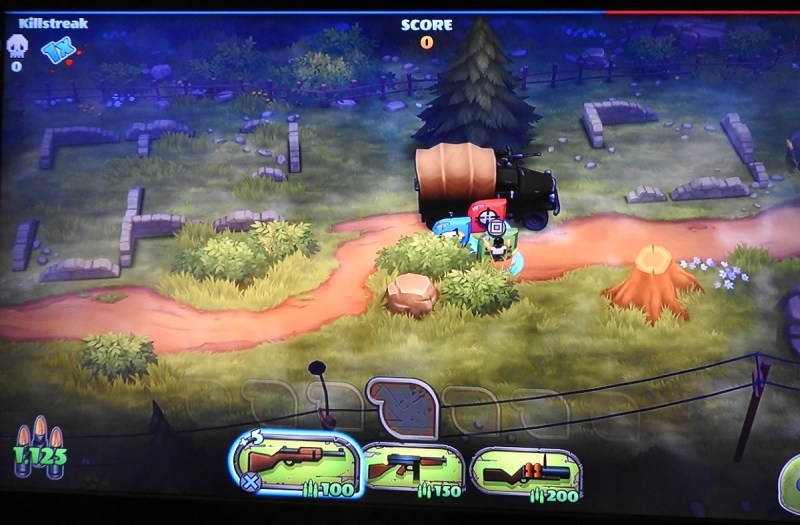 Above: The start of a battle in Guns Up!

The downloadable release has cartoon-style graphics in a modern combat setting. When you attack an enemy, you spawn squads of troops from a transport truck, and these troops (rifle infantry, Tommy gunners, grenadiers, or medics) proceed from left to right in side-scrolling fashion. They don’t run at Call of Duty speeds. The soldiers bound along in a kind of slow motion across a fairly restricted map, with two or three avenues of approach to the enemy. When they make contact, the results are bloody, happening in real time.

If your human opponent has set up defenses properly, you’ll have a tough time getting through to blow up their headquarters. But if you do blow it up, you win the match. If the enemy destroys your transport truck, however, you lose.

Guns Up! has a nice progression system that will keep you playing as you level up. Over time, you can join an alliance, which is another feature borrowed from the likes of Clash of Clans. This lets you get together with friends and try to dominate entire regions. 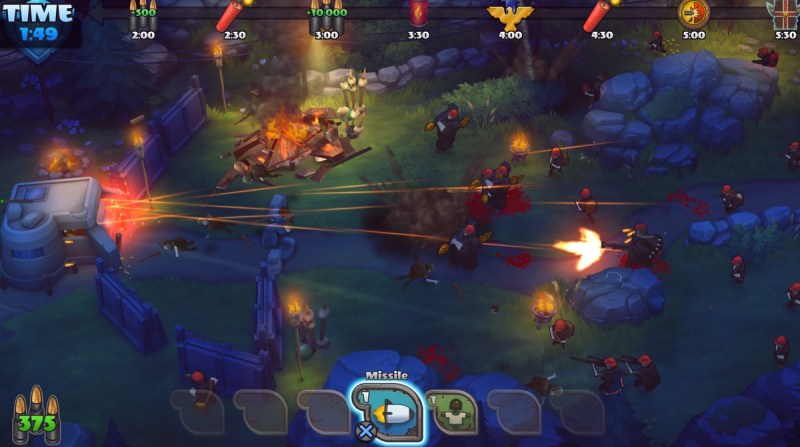 Above: A furious battle in Guns Up!

The soldiers are autonomous to the degree that they will fight whatever they encounter, including defending enemy troops or various sniper, mortar, anti-aircraft, or machine-gun emplacements. As your soldiers do damage to the enemy, you earn points that you can use to spawn more squads.

You start out with a few special tactical attacks or maneuvers that you can use at exactly the right time. If your troops run into a sniper emplacement, you can take it out with a missile attack or fire bomb. You only get a few of those in the battle, so you have to use them strategically. If your troops do a lot of damage, however, you can earn more of these tactical abilities.

Meanwhile, you have to wait for the meters to rise, so you can spawn more soldiers. The grenade, flamethrower, and rocket troops do the most damage and are the most expensive. But, they’re also quite vulnerable to enemy fire. The challenge is that while you use your points to spawn more reinforcements, your enemy does the same.

Your decisions make a difference in the battle, and you stay busy enough so that the asynchronous combat feels very interactive. The explosions are particularly satisfying. And when a fierce firefight is going on, the action will feel very much like a bad ass and intense console experience.

The game is replayable in part because you have to take out bases and earn up to three stars based on how well your troops do.

A light touch with microtransactions 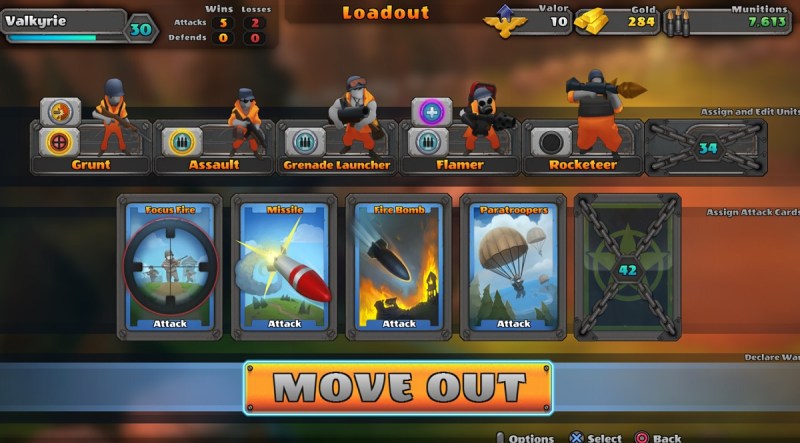 Above: Guns Up! lets you purchase card packs. But you don’t have to buy energy.

With each victory, you earn “munitions,” the basic currency of the game. You can also purchase “gold” to buy items like upgrades, card packs, and decorations. Most free-to-play titles have some kind of ham-fisted “energy” mechanic where you have to pay real money to get more turns during a match or deal with delays in how often you can play. Hardcore players in particular view these attempts to squeeze money out of them as evil.

When you attack an enemy’s base, you have to expend some munitions. So, you can’t keep going that way forever, unless you’ve built up a big supply of munitions. But, a hidden method is available for you to keep going. When you hit the button to attack, you can hit up on the D-pad. You’ll see an option where you can attack for free but get reduced prizes if you win. That’s the way you can keep attacking. 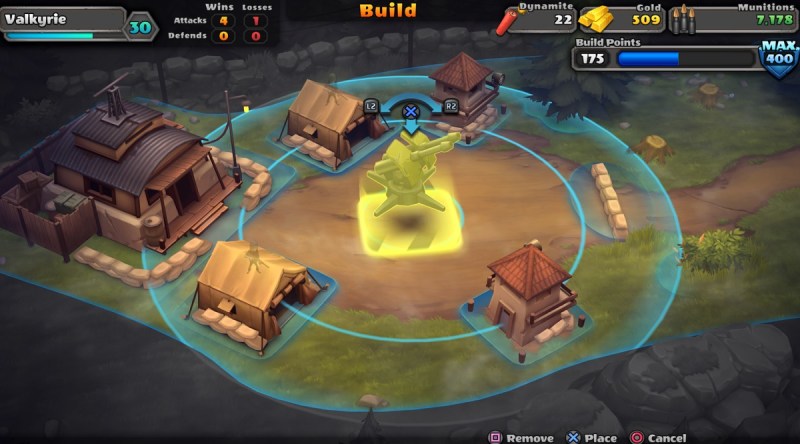 Above: Guns Up! lets you set up base defense to get the best results when enemies attack.

The defense mode adds some variety. Setting up your base to fend off the enemy properly is a bit of an art form. You start out pretty weak, with a couple of options for strong defenses like a sniper emplacement or machine gun nest. You can lay down some walls, sandbags, and tank traps. Your own spawned defending troops will gather at the sandbags and tank traps, adding to your defensive fire. You can keep your important buildings like the infantry-spawn tent at the back.

Some of the best-defended bases channel the attacking troops into killing zones, where machine guns can take them out. But any decent enemy, even the A.I.-controlled CPU player, can earn tacticals like missiles to take out your entrenched defenses. So, you have to defend as much as you can.

The CPU opponent helps you identify your weaknesses, so you can work on them before humans come after you. 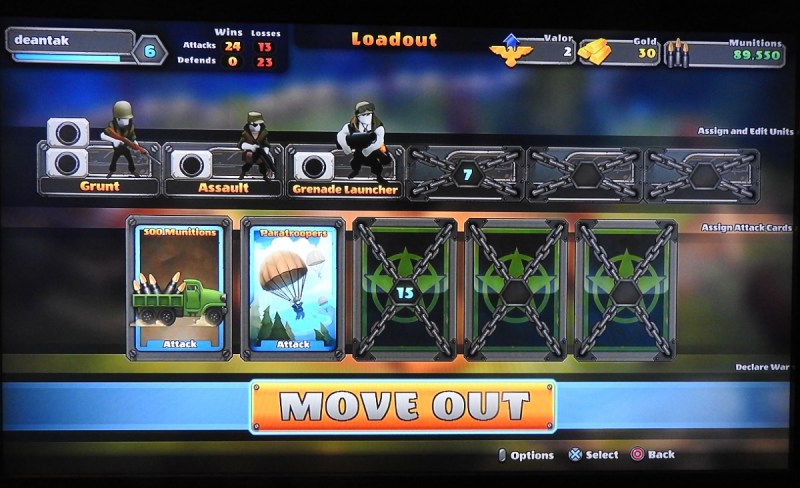 Above: Guns Up! has special cards you can play to beef up your odds in a given match.

The cards that you can earn through victory or purchases can be vital in matches. These cards get progressively better and more powerful, giving you more options as you take on tougher opponents.

In a given match where you spend 1,000 munitions, you can earn more than that and can score a few cards as a reward. The rewards are smaller if you opt for a “free” attack.

The cards are where Guns Up! shows its personality. You can purchase a “big head” card, which gives the soldiers huge bobbleheads. Or, you can get a card that gives you “paratroopers,” which you can land behind enemy lines and use to do a lot of lethal damage. (You can also craft your troops to look different or buy decorations as you wish.) 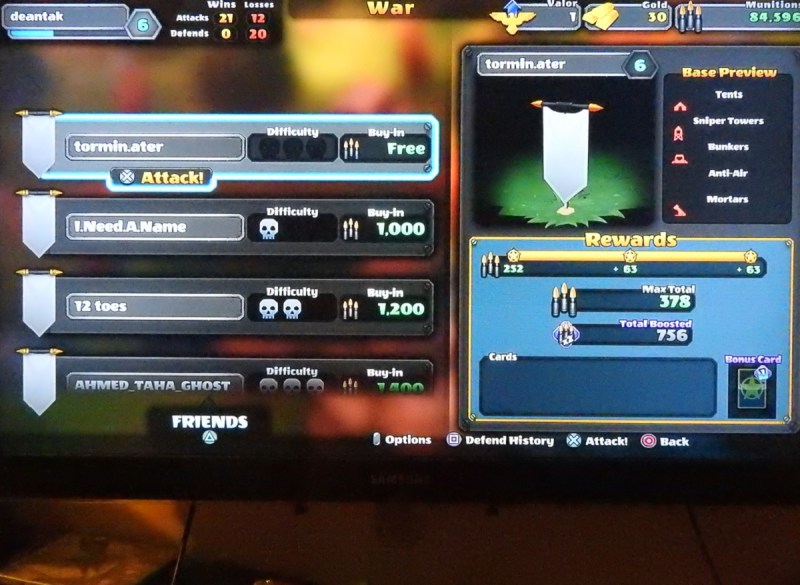 Above: Guns Up! lets you select which enemy base you’ll attack.

When enemies attack you, they can steal your stuff. When you log in, you can see who they are, and you can launch your own counterattack at their bases. You spend some munitions to do so, and the degree of difficulty of the attack is listed for you to see. Sure, it’s another feature from Clash of Clans. But, it’s a good one that will keep you coming back. 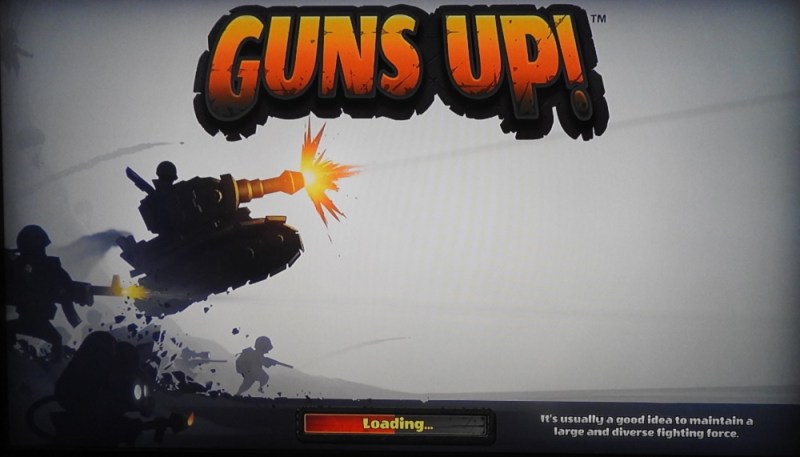 Guns Up! requires an online connection. The problem with that is that it’s a slow-loading game. I’ve had to deal with a long first-time initialization and update screens. Then, once I log in, it takes a while to load each screen every time I click on an option. Battles take a while to load, too. It feels like forever sometimes.

This is simply not acceptable, given the kind of game that it is. Guns Up! is a title that you want to play while you are in between sessions of big games on your PS4. If it were a mobile game — which it very easily could be — then you would quickly lose patience with it.

Sony has to fix this problem, hopefully with updates, that will keep this live service playable.

Your soldiers could be smarter 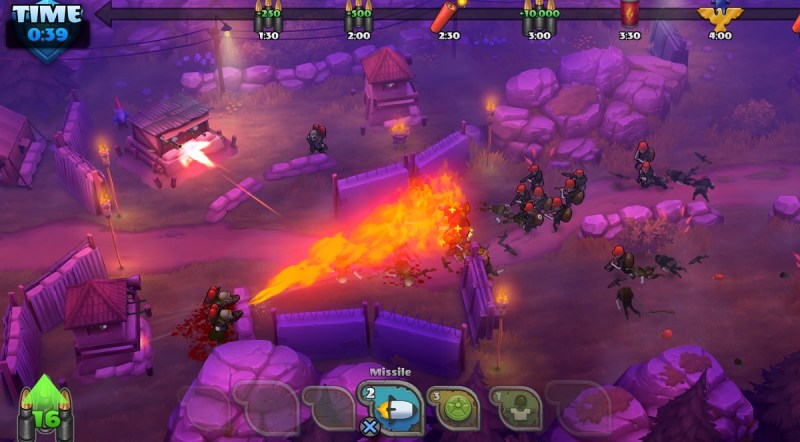 Above: Action from Guns Up!

The soldiers are simpletons. They march head-on down roads and pathways. When they encounter an enemy, they start shooting. But, if your enemy has a line of troops at sandbags with a machine gun nest behind it, your troops will shoot at the soldiers and then get mowed down by the machine gun. That’s where you have to use one of your expensive tacticals like a missile strike to hit the machine gun.

I appreciate that the game is simple, but the soldiers could have a little more common sense. I don’t want to use my limited means of interacting just to bail them out of tough spots. If a flamethrower is attacking, your soldiers will walk right into it. And if you lay down tear gas, it will take out the enemies. But your soldiers will also advance into the tear gas and incapacitate themselves. That’s pretty dumb.

You have a “rally flag” among the tacticals that you can use once or so in a match. It’s important to use it more as a retreat option so that your surviving lead attackers will come back and group with the reinforcements. You can also use it to retreat to the safety of the transport truck, which has a machine gun as a last line of defense. A better way should exist to control your troops, making them attack where you want them to go or to outflank enemy positions. And it would be nice to have a retreat option that doesn’t cost you one of your expensive rally flags. 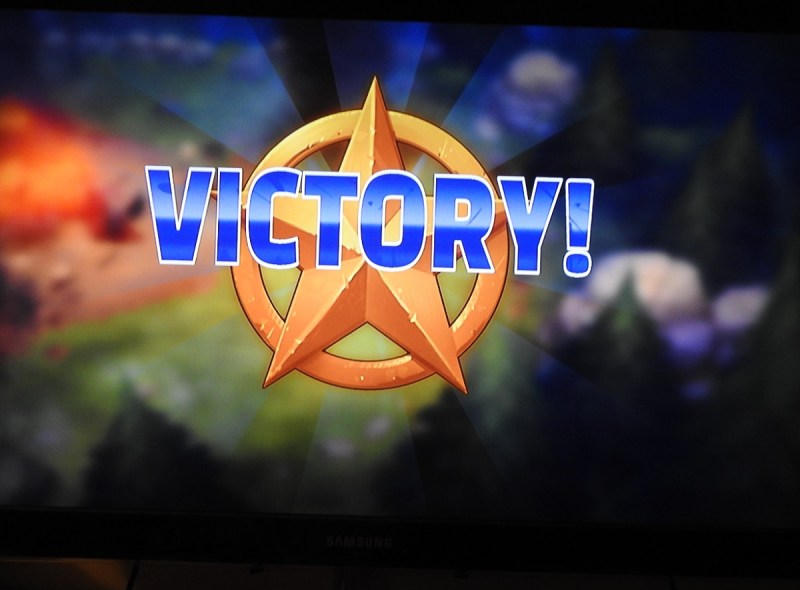 Above: Victory is your main objective.

Guns Up! will look familiar to a lot of players through its similarities to Clash of Clans. But, it has enough going for it to be unique and enjoyable. It is vastly more interactive than a lot of asynchronous multiplayer offerings that have proliferated on mobile, and it successfully brings some of the accessibility and simplicity of mobile games to the PS4 console.

I hope that Sony fixes the slow loading times, but I don’t feel like that’s going to kill off interest in the game entirely.