This generation of home gaming consoles has so far avoided any issues akin to the Xbox 360’s infamous Red Ring of Death, but that doesn’t mean we’ve escaped all problems.

It turns out that the launch version of the PlayStation 4 has an annoying quirk that affects a number of people with Sony’s latest console. The system, without warning or reason, can eject your discs — sometimes even as you’re playing a game. We’ve researched the issue, and it looks like this happens for a couple of reasons, but they all have to do with the touch capacitive (non-mechanical) eject button on the front of the PlayStation 4. We’ve also got a few tricks for fixing this. But you may still have to contact Sony support.

Before we get into how to fix the problem, let’s explain some of the things that can cause this to happen. The central issue stems from just how sensitive that eject button is. Sony has actually fixed this issue in a recent revision of the PlayStation 4 that drops the touch buttons in favor of power and eject buttons that are mechanical and require you to physically depress them.

For the old models, though, the sensitivity of the touch button meant that all it takes a little bit of rubber to activate the eject sequence. Unfortunately, Sony put a rubber foot just underneath the eject button. That rubber can absorb heat from the PS4, which causes it to expand. That process can force the foot to wedge itself up into the underside of the PS4 where it will often hit the eject button.

Now, this isn’t the only reason, but it seems like the most common cause. And with that in mind, let’s get to a few fixes — one that Sony suggests and two that we’ve crowdsourced from a bunch of forums around the Internet.

Unsurprisingly, Sony wants to know if you’ve tried turning your PS4 on and off again. This is the first tip you’re going to get from Sony Computer Entertainment if you tell them the problem.

Here’s how the process goes.

Now, if this works, it’s probably only a temporary fix. That’s because you’ve given the rubber foot or other malfunctioning pieces time to cool off. But once the heat returns, it’s possible the ejecting-disc problem will as well.

Your PlayStation 4 has a special way of ejecting discs if, for some reason, the button doesn’t work or the hardware won’t power up. This comes in the form of the manual-eject screw. But this screw can sometimes come loose, which the PS4 will interpret as a technician trying to get the disc out of the system.

To do this, first you need to remove the glossy panel on your PS4:

It’s time to locate the screw. Here’s an image to guide you: 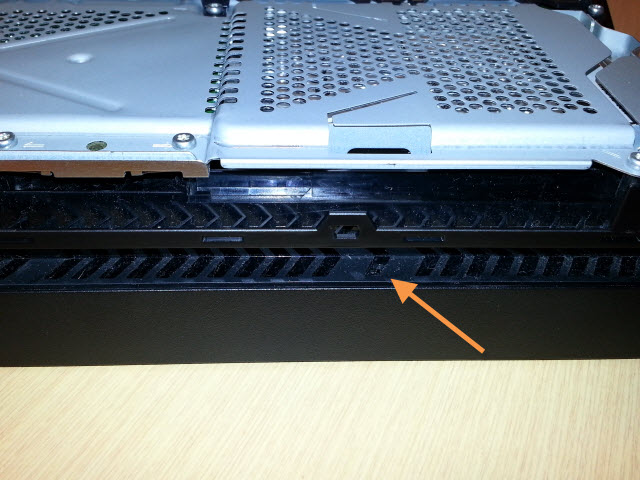 Above: You can find the screen just below one of the PS4’s interior ridges.

This fix may solve the issue, but it is potentially also temporary because the same forces that caused the screw to come lose in the first place may cause it to happen again.

Hey, don’t do this if it makes you uncomfortable, but — from what we can tell — this procedure is one of the more permanent fixes for the ejecting disc problem without having to ship your console off to Sony. That does not mean it will fix it for you. If doing this kind of surgery on your PS4 sounds awful, you should probably just go ahead and send your machine in to get fixed.

Here’s how to do it.

Now, why are we having you rip it out instead of setting the PS4 on its side? Well, you can try that, but it’s likely that repeated heating and cooling — along with the constant pressure of gravity — has pushed the foot up and into your system in a permanent way. This would cause it to expand and find a way to hit the eject button regardless of the system’s orientation.

Your console is probably still covered for this kind of fix. If you want a professional to take a look and address the problem, hitting up Sony Computer Entertainment’s support website is your best bet. You can chat with a representative online, and they’ll run you through how the official repair process works. Sure, you won’t have a PS4 for a week or two, but at least Sony will give you some guarantees.

That’s more than you get from a pair of needle-nose pliers.