Find the right gun for the job. 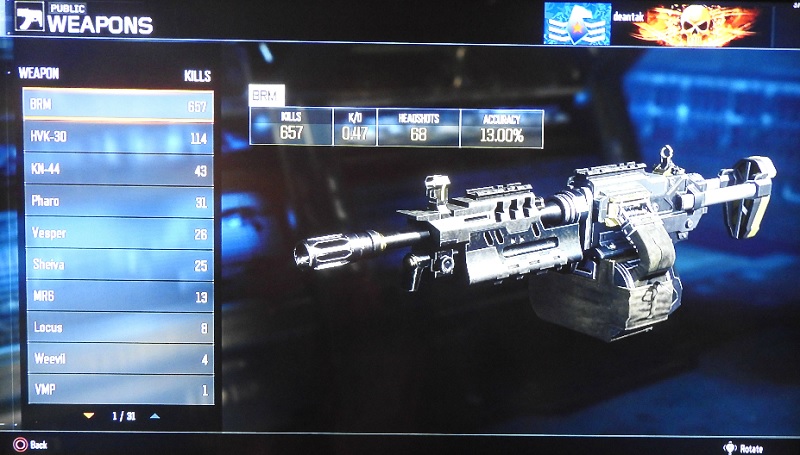 Above: My stats on the BRM light-machine gun are far better than with other weapons.

When you’re starting out, you may be temped to use the assault rifle as your default weapon and just level that up. But over time, you should choose the right gun that works on a given map. If you do this, you may get much better results. On maps with lots of indoor fighting or short shooting distances, you have to be quick on the draw. That means you’ll need a submachine gun. With the Core maps, there weren’t that many that fit this type, so I didn’t do much to level up the submachine gun. If you watch some of the quickest players on Twitch, however, you’ll notice them using submachine guns with great skill. They often jump high in the air rather than just run around corners. That gives them a vertical edge on anyone who is simply running around a corner. It’s harder to shoot while you’re in the air, though. So I never played that game. I simply prepared myself to shoot low or high when I rounded corners.

I didn’t find the right assault gun until I leveled up to 43 and got access to the Sheiva marksman rifle. It’s deadly and accurate, but it doesn’t fire a lot of shots at once. But it can take out infantry with a couple of shots, and sometimes just one shot. You only get 15 shots in a clip, but that’s often enough to get multiple kills. I’m glad I didn’t level up my other assault rifles until I got the Sheiva.

But my favorite weapon for an old-timer, or a noob, is the light machine gun. In this category, I stuck with the very first gun I had access to, the BRM light machine gun. It’s a tough gun to use early on, when you don’t have a gunsight or a stabilizer. It shakes a lot, and it’s slow on the draw. But it packs a big punch and can really destroy enemies quickly. It’s best used when you want to camp in one spot and wait for the enemies to run by. It has good range, as good as a sniper rifle in most cases. But it’s a lot easier to wield than a slow-loading sniper rifle.

When you level up the BRM to the top level and get an ELO gunsight, it becomes deadly accurate. And when you fire, the bullets do a lot of damage. So you don’t have to be as accurate by hitting the enemy multiple times, even at great distances. As long as you add the right attachments, use the right perks, and find the best places to camp out, you’ll be able to do a lot of damage with this gun. I didn’t level up to the higher-rated LMGs because the BRM is pretty powerful as is. This gun was key to turning around my kill-death ratio, and it made me as deadly as a sniper without making me as vulnerable as a sniper.On top of that, even if you don’t always take out the sniper on the other side of the long-distance space, you do a big service for your teammates in denying the sniper the free use of the deadliest perch. All told, I’ve logged 657 kills with the BRM.

Use the right loadout with your gun. 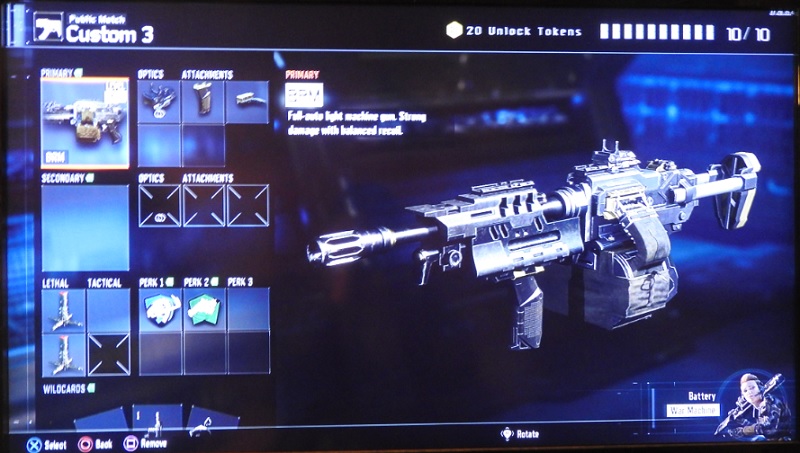 Above: Here’s my loadout with the BRM LMG. The Trip Mines are critical.

As I mentioned, you have to make sure you use the right attachments on your weapon. You get 10 points in the Pick 10 system to allocate to your weapons kit. With my light machine gun, I added a gunsight. That’s a no brainer. I also added a grip to make it more accurate. I didn’t need the extended ammo magazines because I rarely stayed alive long enough to make use of them.

I got rid of my secondary gun, which I almost never used. And, once I reached level 17, I added the Trip Mine, which you plant in the ground to cover your back. When someone approaches from behind, then it blows up and you get an extra kill. I liked this so much that I added two Trip Mines, so that I could cover two doorways or trick the experts who would defeat the first Trip Mine and then run into the second. For my remaining Pick 10 points, I added a “fast hands” and faster timer on my Specialist’s weapon. The Trip Mine grenades go perfectly with the camping strategy and the light machine gun, and they make it far more survivable for the strategy of drawing the enemies to your killing zone.

With five types of weapon classes, there are more than a 100 options for you to specialize in, Vonderhaar noted. There are also a lot of options with attachments, accessories, and perks. You can’t master them all, but there’s a big payoff if you master the right ones. 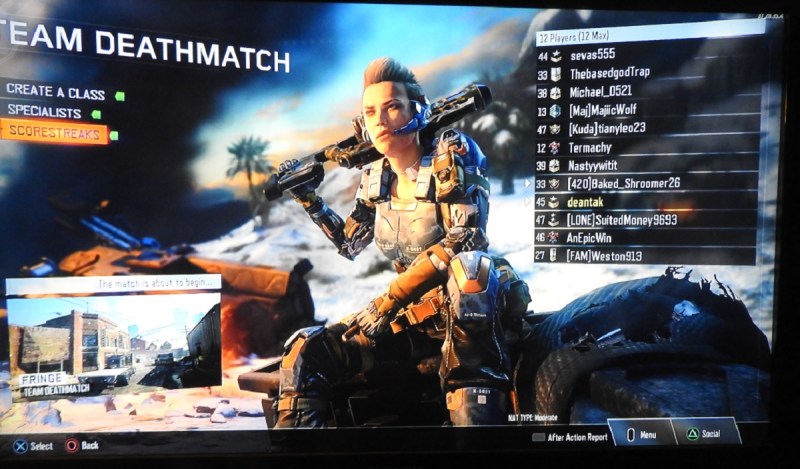 Above: Battery’s War Machine ability is a noob’s dream: the grenade launcher.

I also learned that my Specialist, one of nine different characters available to play, was also very important. I used Battery, a cigar-choming woman whose Specialist “War Machine” ability activates a grenade launcher. The grenade launcher only has a limited number of shots and a limited time meter, but it is deadly. I had multiple double kills and even a triple kill once because of the grenade launcher. (Battery was also Vonderhaar’s favorite). It’s a very satisfying weapon that can kill even if you aren’t hitting the enemy with a bullseye.