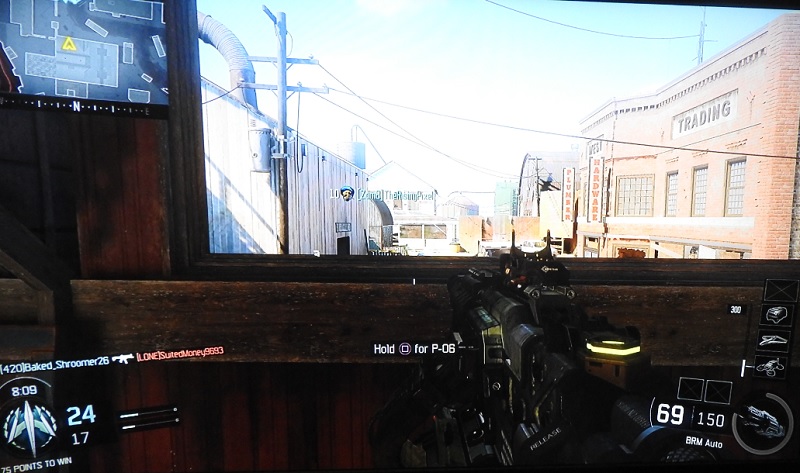 Above: This is the camper’s dream window in the Fringe map.

If there’s a map with a long distance view, that’s great for snipers. And it was also good for me with my BRM gun, which packed a powerful punch at long range.

I found that some of the maps were perfect for my camping strategy, where I would stay put with the LMG and protect my flanks with Trip Mine grenades. The Fringe map was one of these. I would go into the big buildings with a window that looked over the main thoroughfare. Then I would stay there and shoot whoever appeared in the window at the other building. I did the same on the Combine and Breach maps, even though the range was very short from one perch to the target area. I also used my camping strategy to great effect in Hunted, Infection, and Stronghold maps, which also have long-distance shooting positions. It also worked great in either Domination or Team Deathmatch modes.

But the same tactics and same guns don’t work all of the time. My LMG camping strategy didn’t work so well in Redwood, however, because enemies were constantly coming up from behind or converging on the sniping points. The same was true for Aquarium, Metro, Exodus, and Havoc. On those maps, I used an assault rifle and ran around more to find enemies on the run.

Of course, once you get used to these maps, the downloadable map packs will come and you’ll have to learn them all over again. The key isn’t to stay in one spot the whole time. You can get a few kills from one location. But if you stay there, the enemies will learn to sneak up behind you and eventually learn how to shoot out your Trip Mine grenades.

Make them come to you. 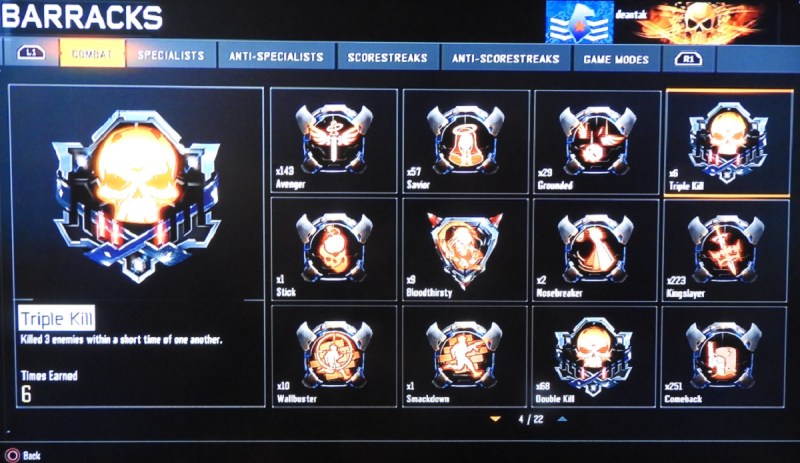 Above: Here’s the record of my achievements in various Black Ops III matches.

If I haven’t made it abundantly clear so far, you have to realize as either an old gamer or a noob that the quick-draw youngsters have an advantage over you. They are faster and more accurate. So you have to turn the tables on them. With the Trip Mine grenades, you can stay in one place without worrying that someone will come up behind you. A friend in multiplayer also serves the same purpose here, but I was never able to enlist a stranger to do this for me. Then you can stay in a spot and make the enemy come to you. When they do, you’ll be ready to pull the trigger, while they’ll be running fast. It’s the only way I know to even the odds in multiplayer. The problem is that they will eventually learn you are taking this strategy, and they will adapt. Once they start changing tactics, you have to shift as well. For me, that means getting a couple of kills in camping position, and then turning around and waiting for them to sneak up on my position. This change can usually net a couple of more kills.

If you survive long enough to execute this strategy, you can get a Scorestreak such as a UAV (a drone that identifies enemy locations on a mini map) or a HC-XD explosive remote drone. And that will help your team a lot.

Don’t forget to change things up. 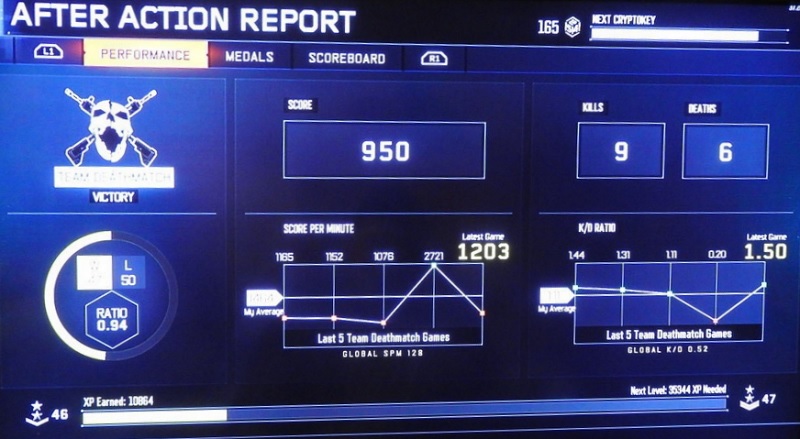 Above: Here’s the results form a recent after-action report. It is possible for an old guy to get some kills.

As soon as you become comfortable with a gun or a class of weapon, you’ll start leveling it up fast. Once you hit the maximum level with that gun, it pays to start leveling up your other weapons, such as sniper rifles or shotguns. I haven’t gotten to this point yet. But you have to consider mastering multiple guns as important as changing things up in the middle of a match. Over time, you’ll become much more deadly on any map if you can fight with leveled-up weapons. You should also get used to fighting in 3D, using the vertical space by mastering the ability to jump high or cross divides with double jumps.

And that, my readers, is my advice for newcomers and oldies on how to survive on the modern battlefield. For at least a couple of minutes.