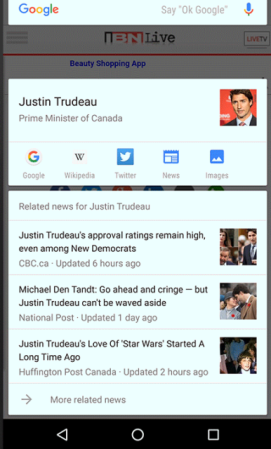 Above: Now on Tap: Related News

Now on Tap was officially launched alongside Android Marshmallow in October. It offers a quick way to search for additional information within apps by holding the Home button. This is context-specific, so if you receive a message from someone asking if you would like to go see “Star Wars: The Force Awakens,” you can hit the Home button and see instant information about the film. Now on Tap basically looks at your screen and tries to understand what’s going on, thus saving you from having to open another app.

In addition to such things as movies, places, and people, Now on Tap will also now be able to recognize a flight number within a piece of text, meaning you can automatically search for flight status updates for friends and family members who message you the details. Additionally, it will also now display the tracking information for items you’ve purchased online.

Other updates to Now on Tap include being able to surface related articles when you’re reading the news, and a new share icon that lets you share screenshots with other apps.

Now on Tap is a genuinely useful feature to have, but it has hitherto only worked in English. With the latest update it will also work with French, German, Spanish, Italian, Russian, and Korean, effectively opening the feature to hundreds of millions more users.

Google isn’t the only company pushing smart assistants out into the digital ether. Just last week, Microsoft finally introduced Cortana for Android and iOS in select markets, and yesterday it opened up a private preview of its Custom Recognition Intelligence Service (CRIS), a Cortana-like speech-to-text technology, to some third-party developers.