For a game still in its infancy, Heroes of the Storm exploded on to the esports scene in an impressive fashion. With 17 major ($25,000-plus) tournaments in its first year and over $2 million dollars paid out — $1.8 million of that since the game’s June 2, 2015 official release — Blizzard’s Heroes is on track to be one of the top 10 paying esports titles of all time before its one-year anniversary.

Blizzard also broke new ground with its massive Heroes of the Dorm event in 2015, which rewarded the winning team with complete university tuition and appeared live on ESPN2. A mammoth success in terms of visibility, Heroes of the Dorm on cable television throughout North America was a watershed moment for all of esports.

Looking forward to 2016, we don’t know exactly how things will play out — Blizzard hasn’t formalized the details. But we have the shell of the format for the official Global Championship Circuit. With that and the recent BlizzCon announcements and gameplay patch details, we can begin to help understand how things will go down in professional Heroes play next year.

Blizzard has committed to continuing content updates for Heroes of the Storm, and each new character and map has had some impact on the pro scene so far. As it stands, players are awaiting two new ranged Assassin Heroes — Lunara and Greymane — that were Blizzard announced during BlizzCon 2015. The other BlizzCon character announcements were Cho’Gall, who is already out, and Tracer from Overwatch, who will join the Heroes roster presumably closer to when Overwatch launches in spring 2016. 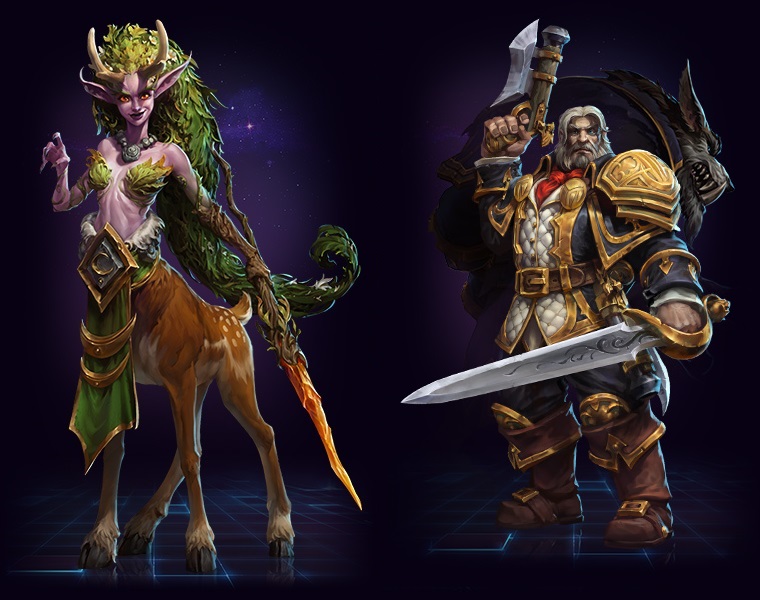 Above: Heroes of the Storm will add Lunara by the end of the year. No release time yet for Greymane (right).

New variety coming to the Assassin role can only be good news, since the existing pool of 12 options includes a number that are arguably only effective in compositions catered to them, such as Illidan. Game director Dustin Browder tentatively promised Lunara would go live before the end of 2015, while no date has been provided for Greymane yet.

Greymane will be the new gold standard in auto attack (“AA”) Heroes, as his attack speed will always be quite high with Inner Beast. His take on the Giant Killer talent, Alpha Killer, will allow him to mow down high-health front-line Heroes quickly. Lunara, on the other hand, will have a unique toolkit (an Assassin with with her excellent ability to provide vision/scouting, higher-than-average speed (so running away from her is impossible!) and the incredible utility of an ability like Abolish Magic (“Activate to remove all stuns, roots, silences, slows, and damage over time effects from yourself and an ally and reduce the duration of their reapplication by 50 percent for 2 seconds”). Expect to see both of these characters in pro play frequently.

You can see just how versatile Lunara is in this video:

In general, new Heroes have come to Heroes of the Storm (since its technical alpha launch in March of 2014) roughly once a month. New Battlegrounds have been less frequent, with five new maps having been added since the beta launched on January 13. No further Battlegrounds are officially on the horizon, but it seems unlikely that the developers are done experimenting with them — seeing additional new maps starting in February, and every three months or so thereafter, shouldn’t be a surprise.

The latest map to go live was Towers of Doom, which creates a new challenge for players in that they cannot “end” the game — they have to continue to take control of the various objectives on the map to deal damage to the opposing team’s Core, rather than being able to push through and damage it with their characters. This might be a map that pro teams will try to avoid, since it doesn’t let them press their advantage when ahead.

Before BlizzCon 2015 had even crowned the first ever world champions in Heroes of the Storm, Blizzard had already started talking about how it wanted to make the esport circuit even better in 2016. The new system will see three Global Championships hosted in the spring, summer, and fall of 2016, with unique regional qualifiers managed separately. The spring championship will officially have a prize pool of $500,000, which suggests that each championship will have a prize pool of that size, and that the grand finals at BlizzCon will be substantially more lucrative than the $500,000 prize pool it had this year.

(For comparison’s sake, Hearthstone is getting a similar three-season system, but each region is operating independently and awarding a $100,000 USD prize pool – meaning $400,000 will be awarded per season. The grand finals of that Championship Tour are an impressive $1 million, so seeing a pool for Heroes of the Storm of $2 million would not be a surprise. That would mean that Blizzard’s in-house commitment to Heroes of the Storm esports in 2016 would be over $3.5 million alone!)

Blizzard also spoke to the possibility of having ways to provide “high-MMR players who have not yet jumped into esports with even more opportunities to show they have what it takes to compete on a global stage.” This is presumably their version of the Challenger tier system from League of Legends, which houses the top 0.02 percent of all LoL players worldwide. A way for strong players to be found and recruited by a more sustainable team ecosystem would be an immense improvement to the esports scene Blizzard is trying to establish.

(Respawn) Times, they are a-changin’

The most recent patch to Heroes of the Storm landed on November 17, and it included some core game design changes to scaling and respawn timers. Base values for health and damage were adjusted globally to allow per-level increases to be multiplicative (percentage) values, instead of additive, flat values. This makes early game level discrepancies substantially less punishing, keeping early game engagement losses from snowballing into unrecoverable situations. 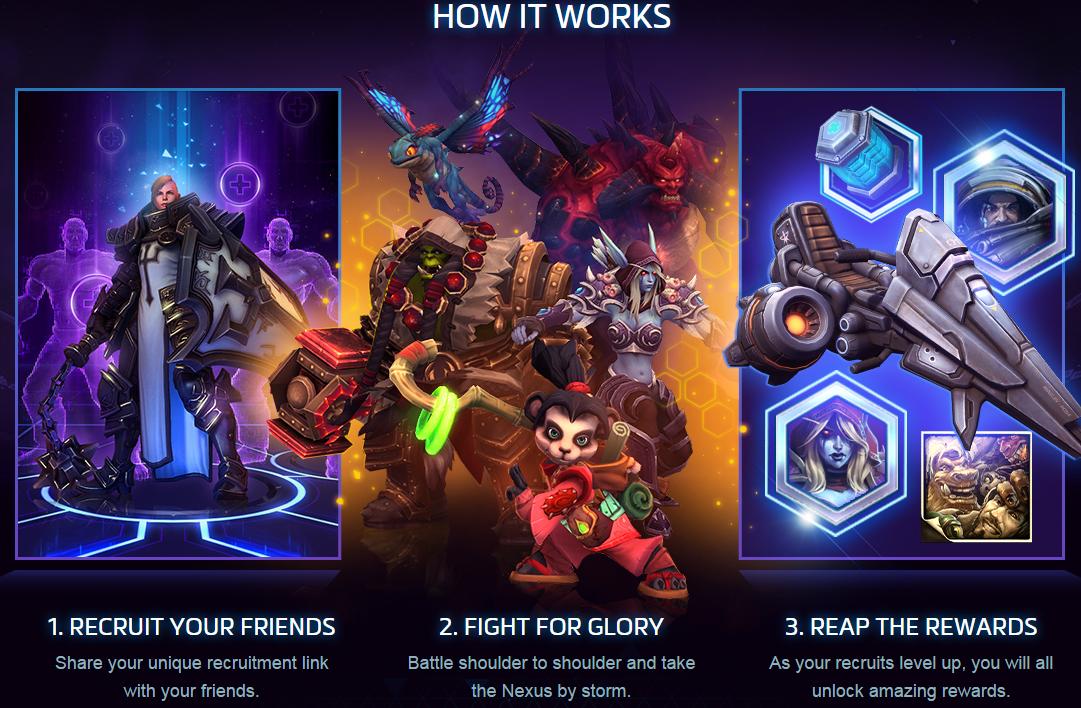 Above: Blizzard has launched a new Recruit-a-Friend program for Heroes of the Storm.

Respawn timers have also been adjusted upward in the early (levels 1-10) portion of the game. Since the scaling adjustments above would diminish the raw value of kills-as-experience, a longer period in which to strategically capitalize on the power play advantage of your dead opponent(s) absence from the field is how Blizzard has rebalanced the value of early game Hero takedowns.

Early takedowns in pro games are not especially common, so the respawn timer change is not as significant to how teams will strategize in Heroes for esports purposes — but the scaling changes make applying significant siege pressure to enemy buildings in the early game more viable. The importance of having characters that can bully an opponent in their lane in the early game as both teams await objectives to contest and try to level up cannot be overstated. These changes will likely lend themselves to continue the predicted trend of teams choosing to utilize double Warrior character compositions (which were the most common compositions at BlizzCon, prior to these changes, as well).

Betting big on the Blizzard brawler

Major investments, infrastructure development, consistent content updates, and improving community engagement are the hallmarks of Heroes of the Storm’s first few months post-release. As the game sees further design refinement and the scene attracts even more top talent, it seems poised for an exceptional year in 2016. If Blizzard can further successfully find ways to distinguish its entry into this genre, Heroes could be a mammoth hit for them, not to mention one of the fastest-growing esports of all time.

For Blizzard fans, the one black mark in all of this is definitely the tendency for the developer to hold back and not release anything ‘until it’s ready’. Unfortunately, the esports scene — players, teams, fans, advocates, and more — often need information further out in advance to make informed decisions than Blizzard often has it ready (see Blizzard Soon). Hopefully, the talk of infrastructure in their 2016 teaser hints at establishing a more consistent set of parameters for Heroes of the Storm (and all Blizzard esports, really), with less year-to-year variance and more predictable scheduling and setup for everyone involved.

Altogether, however, the ecosystem that Blizzard is hinting at for Heroes of the Storm and the impressive growth in investment and personnel that they have made in esports in general suggest nothing but good things in the short term. It’s a game that puts a fresh spin on a genre that is already massively successful, and the pro scene has a ton to offer for entertainment and incredible gameplay. If you haven’t already, give it a try — you might be surprised how much fun you can have smashing Diablo’s noggin in with Thrall’s hammer.