Motorola’s conspicuous reluctance to follow other manufacturers in offering a metal-clad flagship handset may be poised to change, if a photo published by Chinese mobile site cnBeta (via Pocketnow) does indeed feature next year’s version of the Moto X. However, the accompanying report cautions that it is only a prototype, and may not end up representing the shipped design. 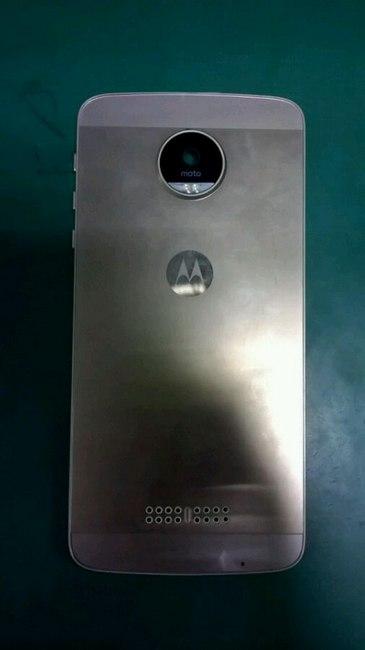 While only seen from the rear, the image immediately brings to mind a mashup of several other OEMs’ devices: Shaped like a Galaxy S6, with a rear speaker grille that apes HTC’s latest Desire models, the handset also features a protruding camera lens module in the vein of Microsoft’s Lumia 950 XL.

For a company that has situated itself as decidedly value-friendly, the use of metal would be a departure from its mostly plastic Moto-branded models — although the Moto X line has been a vanguard in employing premium materials such as wood and leather in the form of optional backplates.

Most of the report is merely speculation, such as the suggestion that the 2016 Moto X may sport Qualcomm’s latest top-of-the-line Snapdragon 820 processor. Moreover, Motorola typically refreshes the Moto X in the second half of the year, meaning that much could, and probably will, change before the design and components are finalized.

Still, it’s very interesting to learn that the Lenovo-owned Motorola is even toying around with the idea of an all-metal flagship, something that Apple, HTC, Samsung, and Huawei, among others, already produce. It’s not clear what a metal Moto X would mean for the popular Moto Maker customization service, though, as such a design would likely be less suited to the color and material variants it enables.