Facebook has relaunched its tool designed to help you be nostalgic about the past 12 months. But while Your Year in Review surfaces the “important moments” that you’ve shared or been tagged in, it’s been improved following criticism the social networking company received for its approach last year. Now the tool has been simplified, features updated filters, and cedes more control to the user. 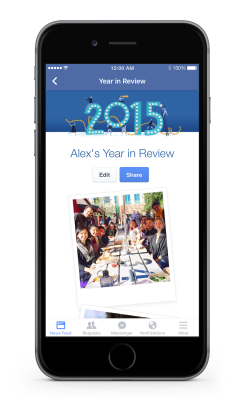 When activated, Facebook’s tool will provide you with up to 10 photos that it thinks should appear in the year-end piece, arranged in chronological order. A company spokesperson told VentureBeat that the final product is not a video but rather a static card that will feature photos that you can share with friends. This is different from previous years, which offered more than 10 photos and were separated into chronological sections based on the month they were posted.

The Year in Review feature is available to all of Facebook’s 1.55 billion monthly active users, and while the majority may appreciate reminiscing about 2015, that’s not necessarily the case for some, which the company quickly learned last year. Whether it’s painful memories about a breakup, divorce, death of a child, natural or man-made disasters, or whatever else, how people decide to look back at the year shouldn’t always be based on what Facebook’s algorithm says it should be.

This is the reason why the company now gives you the final say about which photos make the cut: You can replace any of the photos with another image that you uploaded or were tagged in during the year. The interface has been made much simpler, which we’re told is intentional, as Facebook wants to show that users are in control.

To activate this feature, look for a promotional box at the top of your News Feed. Unlike previous years, Facebook only shows descriptive text, as it got harsh feedback last year due to an insensitive photo appearing on author Eric Meyer’s News Feed.

From there, your Year in Review will be prepopulated with 10 suggestions that Facebook thinks you’d want to include. These are selected based on engagement such as Likes and comments. Filters that Facebook enhanced following last year’s feedback and code pulled from the social network’s On This Day feature are being used, restricting certain things from initially being seen, such as pictures from memorialized accounts.

In a sign that Facebook has learned its lesson, the company wants you to create your own highlights of 2015.

Some might confuse this with Facebook’s Year in Review video that was released earlier this month, which is understandable. However, that one has a more global perspective versus today’s announcement, which is all about individual users and celebrating your year, not billions of others worldwide.

Your Year in Review video will appear in the News Feed and will be viewable on both the Web and on Facebook’s mobile apps.