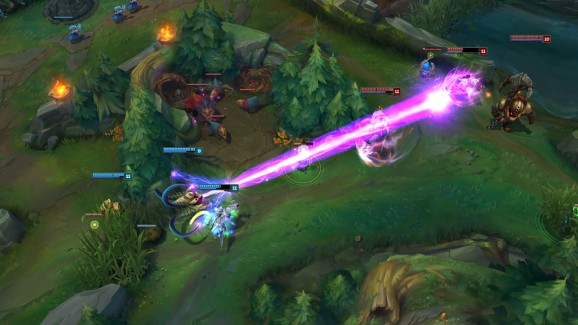 Welcome to the League of Legends jungle.

Los Angeles-based Riot Games made the announcement somewhat casually as part of a post about changes coming to Riot’s compensation structure. It made no mention of the cost of the transaction, as Tencent probably laid out a lot of money to acquire the remaining equity in Riot Games. League of Legends is often referred to by players and observers as the “biggest game in the world.” That’s because it regularly has millions of people playing it at any one time, but it’s also because the free-to-play PC hit makes approximately $1 billion annually from in-app purchases. That contributes to a MOBA market that generates more than $200 million in revenue every month, according to intelligence firm SuperData Research.

Riot Games was founded by Brandon Beck and Marc Merrill in 2006. They launched League of Legends in 2009 as something of a spiritual successor to the popular Warcraft 3 mod Defense of the Ancients. LoL, as fans commonly refer to it, became a huge hit. The game is one of the most-played PC online games of all time. Tencent bought a majority stake in Riot Games in 2011 for a reported $231 million. That gave the Chinese company an estimated 70 percent ownership of Riot.

The 9-year-old company is also well known for spending a great deal on its employees and taking its culture seriously. Riot has thousands of employees, and employee-review website Glassdoor called it one of the best places to work in the U.S., which is notable considering it is the only game developer on the list.

In its post, Riot said that it was shifting to a new structure to “recognize and reward Rioters’ contributions — and that first involves a big change to our existing equity program. As part of this effort, our majority investor, Tencent, recently purchased the remaining equity of Riot Games. This allows us to move away from a Riot equity program towards a cash-based incentive program that allows Rioters to share in Riot’s success.”