Media Molecule took us for a great ride in user-generated content with the LittleBigPlanet series of video games. But that’s nothing compared to what the United Kingdom game studio has planned for Dreams on the PlayStation 4.

Dreams is blank slate, where you can use Sony PlayStation Move controllers to craft your own video game space with a minimum of effort and some very cool visual effects. Media Molecule is creating a series of easy-to-use tools, design inspirations, and reusable content that will enable anyone to create their own video game level.

The only common link between the various virtual spaces — some created by Media Molecule’s expert designers and many to be created by users — is that they are all dream worlds where pretty much anything can happen. You can make a full-fledged video game inside a virtual space, or create something that is cool to look at, as you can see in the videos below.

I interviewed Alex Evans, technical director at Media Molecule, as well as Kareem Ettouney, art director, during a demo of Dreams at the recent PlayStation Experience event in San Francisco. Here’s an edited transcript of our conversation. 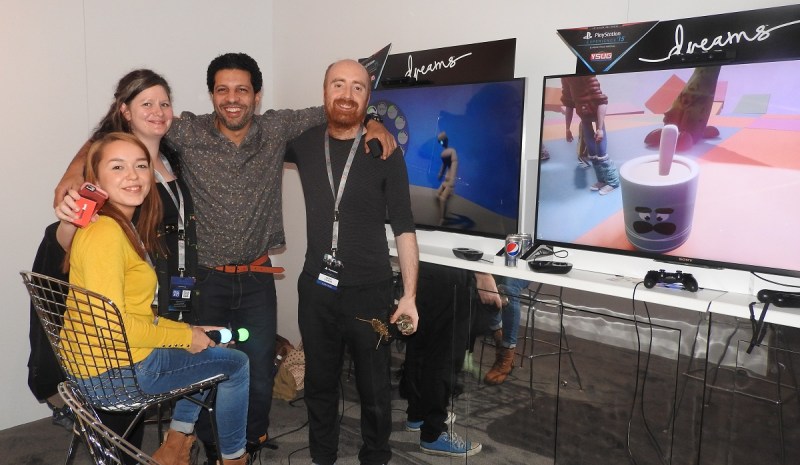 GamesBeat: Tell us about what you are doing with Dreams.

Alex Evans: There will be a story mode, a bit like in LittleBigPlanet. Toward the end of next year we’ll be going into detail about it. When you boot the game, you can play a kind of adventure platforming game. But today we’re showing more about the kinds of experiences, rather than the specific story we’re going to do. This is an example of the environments and characters that are possible.

This is our PS Experience hub level. The little skinny-jeans bear can run around. The cool thing is, the story is that everything is in a dream. You’re helping these characters solve puzzles and go on adventures. But because it’s a dream, any time you see a doorway or a portal or a hatch, you have no idea where it’s going to lead. You open a door in a bar and suddenly you’re on the beach.

With the puppeteering, we use all of the capabilities of the controller to give you a real sense that it’s you. When you play online, that’s a lot of fun. Some of your body language gets translated into the character. There’s non-verbal communication in the performance.

This is an example of a portal. Follow the lights. Who knows where it’s going to take us? In this example, we’re just showing vignettes of gameplay. In this level we can use our imp. The orange guy is the imp. It’s the first thing you can get in the game. You can customize the color, change the expression, things like that. Using the touch pad you can draw a sad face or a happy one.

GamesBeat: I haven’t seen that before. That’s pretty cool.

Evans: You can possess characters, which is a lot of fun. There’s a ton of gameplay based on that. This level was built in a day by the designer of Sackboy. He’s gone light and dark, basically. In levels you’ll also find these collectible items, which allow you to modify the world. The owner of the level can choose what scope you have for creativity. Some levels are wide open sandboxes. Others are a locked-down narrative.

One of our artists has been learning how to redo impressionist paintings. Then he recreated this famous Cezanne painting and made it playable. Then another artist came in and remixed it. He added the little pear. We have high art at the same time as slapstick humor, messing around with the fruit or jumping into the character and acting out around the world. We discover that the painting isn’t just a painting anymore. Cezanne never painted this bit. We imagined the rest of it.

You can share anything online with the community in Dreams, whether it’s a single asset or an entire level. For players, we think it’ll be an exploration of a beautiful series of lucid dreams. We’ll weave it all together in our story. But the beta trial next year will be an opportunity for creative types to build all sorts of experiences. It’s wide open, what they can build with it. You can build stories, make movies, make music, record voice acting, create animation…. 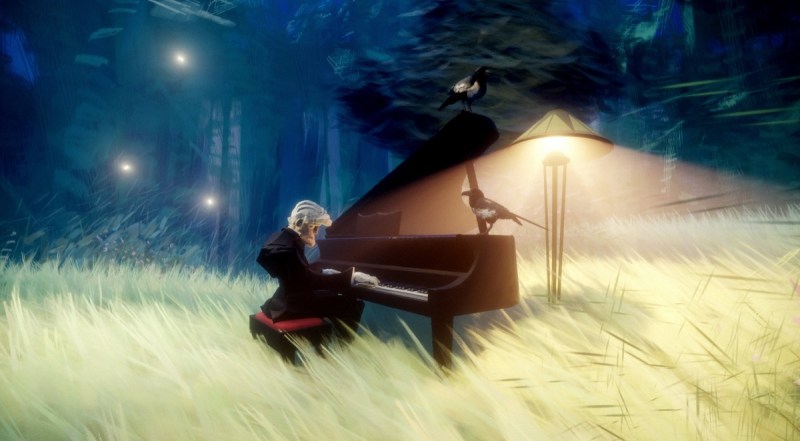 Above: With Dreams, it would take very little effort to paint all this grass purple.

GamesBeat: Will it ship with a lot of these custom levels?

Evans: Exactly. We’re the first users, the super-users at the beginning. But we don’t actually have any special powers. We have the same powers as any other users. If the beta runs for six months or a year, by the time the final game releases there should be tens of thousands of assets out there.

One interesting thing about how we do creative in this game is we introduce it to you through gameplay. Rather than there being tutorials and so on, instead you just play a level like this, where the story might be that you’re stranded on a moon base and you have to get past here. You use your imp to grab stuff and clear that area. That’s creative. It doesn’t have to be about making a piece of art. It can just be about building a stairway to get out of the level.

You can go on over and pilot the mech over there. The guy who built this level loves mechs. He’s a big gamer. Everything you create here can be exported to a 3D printer, too.

This will work for multiplayer. The level we’re about to stomp into, it was built for deathmatch or capture the flag sorts of experiences. That’s not going to be the focus of our story, necessarily — we’re focusing on adventure and platforming — but we wanted to show the breadth of experiences you can get from the community. Going through portals and linking them together means you can boot up the game, start playing a sequence of levels, and an hour later you’ve gone on this journey to completely unexpected places.

Kareem Ettouney: We can show you a few of the create tools now. I have a simple module here that I made out of a bunch of colored cubes. I want to quickly make a level out of that. Our system allows you to copy it several times and build a bigger flow. Also, if I raise it up like so, I get an interesting aesthetic. We like playing with that to make some of our spaces.