When I play a game like Devilian, I feel sort of guilty about it. I like zoning out and slaying hordes of monsters in an action-role-playing game by just standing there, spamming the attack button. But sometimes I wonder if I couldn’t be playing something that’s more stimulating. The chase for better loot can seem like a treadmill that doesn’t help you lose weight. But these games engage the right parts of my brain, and I like seeing damage numbers get higher as I play. I can put on music or a podcast and relax as I watch numbers fly off my enemies.

At their best, these ARPGs make getting the loot the fun part, and the rewards act as evidence of the fun things you’ve achieved. But they rely on a strict work-for-reward cycle that keeps you engaged. If the work isn’t fun, the rewards are meaningless; if the rewards stink, the work feels unfair, even when it’s fun.

Devilian (out now for PC) doesn’t find the right balance. The work is only marginally fun and the rewards are mediocre. And without these elements working in tandem, it feels like a big waste of time. 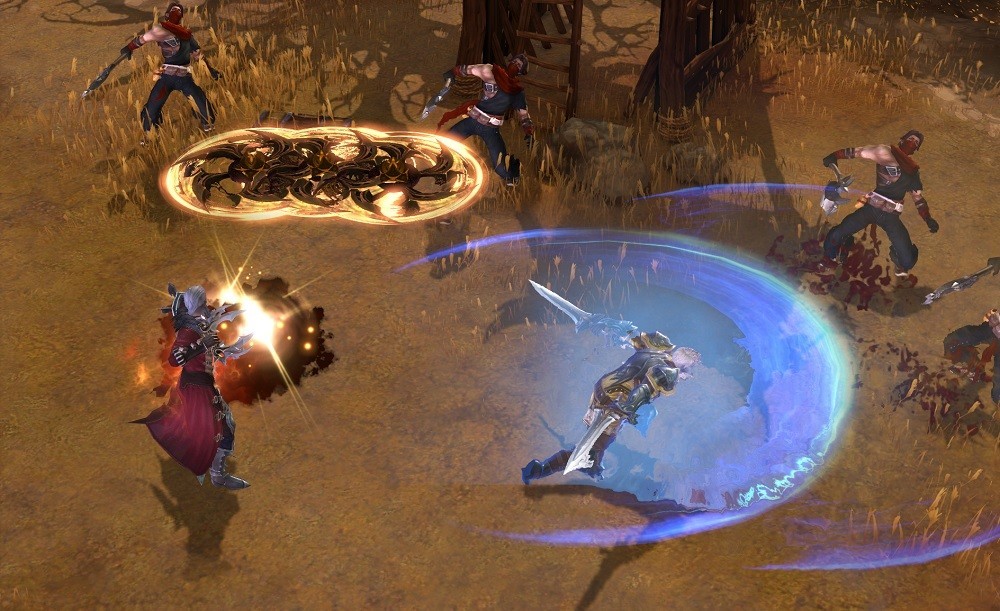 Above: Many of the abilities in Devilian rely on area of effect to properly hit enemies.

You can do a dungeon on your lunch break

Dungeons act as Devilian’s core. As you level up your character by doing quests, you’ll run into a few dungeons, usually to kill the boss monster inside. My first dungeon took me about 12 minutes, but I figured later dungeons would become more intricate (as they do in other ARPGs). But even as I approached the endgame (where players start going back through older dungeons on higher difficulties to grind for better gear), I never put more than 15 minutes into a dungeon, usually finishing them in less than ten minutes.

Dungeons remain simple enough that you can focus on dealing damage, managing your potions, and moving forward to the next area without wandering around looking for the next objective. The doors and the keys you need to unlock them end up being in the same room most of the time. The 10 minute run-times can satiate the desire to see lifebars deplete without taking too long. And once you hit the endgame, you can hop in for at most an hour and make some decent progress on getting the next set of gear you want.

The microtransactions won’t bother you

You don’t have to ever pay a single dollar to play Devilian, which immediately makes it more accessible than a lot of its competition. Spending real money lets you earn more gold and experience, dress your character up in more silly outfits, and speed up some of the gear-hunting you’ll have to do in the later portions of the game. It uses the classic “money for time” trade, and while I don’t like the idea of paying for materials to get better gear, I don’t hate it either, and I never felt pressured to spend money on the game in all of my time playing it.

Devilian might not be as intricate as World of Warcraft or Diablo when it comes to crafting gear and grinding for loot drops, but it does a few smart things to ease new players in.

For one, you never have to pay to maintain your armor, which eliminates some the upkeep costs that can drain players of all their cash. The game also helps you find your footing when it comes to the endgame; every item you need to create or buy to get better armor or access harder dungeons tells you what you need to do to get it, whether it’s doing lower level dungeons or playing the competitive multiplayer. It also has matchmaking for every kind of activity in the game, which means you don’t have to dive into chat channels looking for people of your level to run dungeons with.

These minor improvements  speed up the learning curve by pointing you in the right direction, which I wish more games like this did. 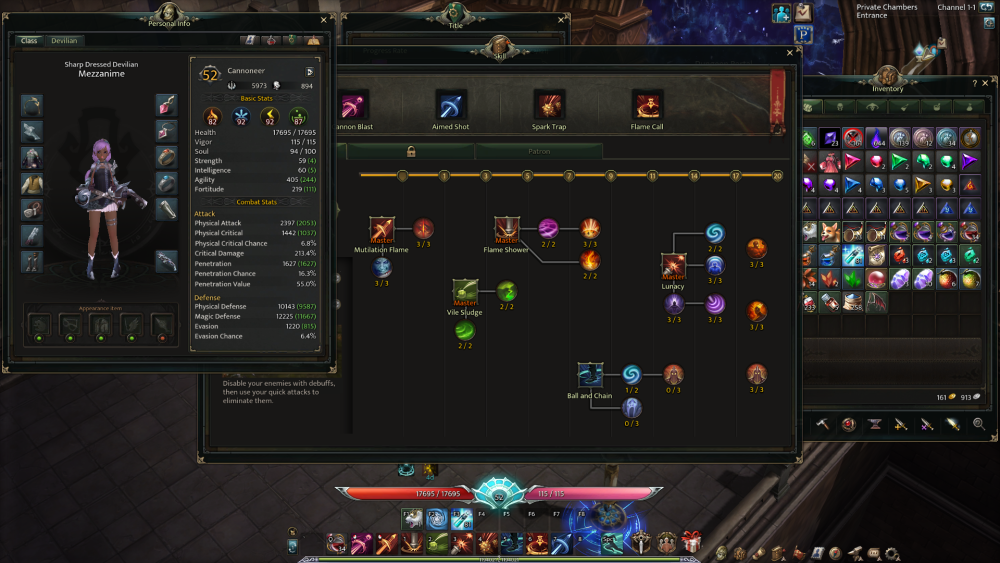 Above: You have to keep track of a lot of things in Devilian, but the game eases you into it.

The slog to the endgame

As I mentioned earlier, Devilian’s dungeons embody everything the game wants you to do; you get to see all your spells at work, your gear matters, and you can get some intense fights once you start ratcheting up the difficulty. But it takes way too long to get to a place where you can just focus on running dungeons.

In my initial impressions, I noted how it seemed structured more like World of Warcraft than Diablo, and that remains the case even after the level cap, which took me about a week of day-and-night sessions with the game to get to. Even after getting there, I’m still not convinced by the structure. Right now, getting to level 52 is an absolute slog, mired by the some of the most tedious quest design in massively multiplayer online games. You talk to a quest-giver, who provides a bit of context for the quest, go off and kill a certain number of monsters or interact with a certain object for however long, and then come back to the quest-giver for a reward.

I like killing waves of skeletons, fishmen, and demons and watching experience bars go up. I like filling up experience bars. But the structure all these quests follow breaks the trance of killing monsters over and over by making it all the more clear that you’re simply repeating the same set of actions for the same rewards ad nauseam.

Every MMO eventually ends up being most known for what they let you do after you’ve leveled up. But I continue to wonder why you even have to level up to get there in the first place. Several quests as a way to teach you how to play, but I don’t think it should take 60 hours to teach someone the ins and outs of a game like Devilian, and it doesn’t make a good case for why this structure continues to exist. 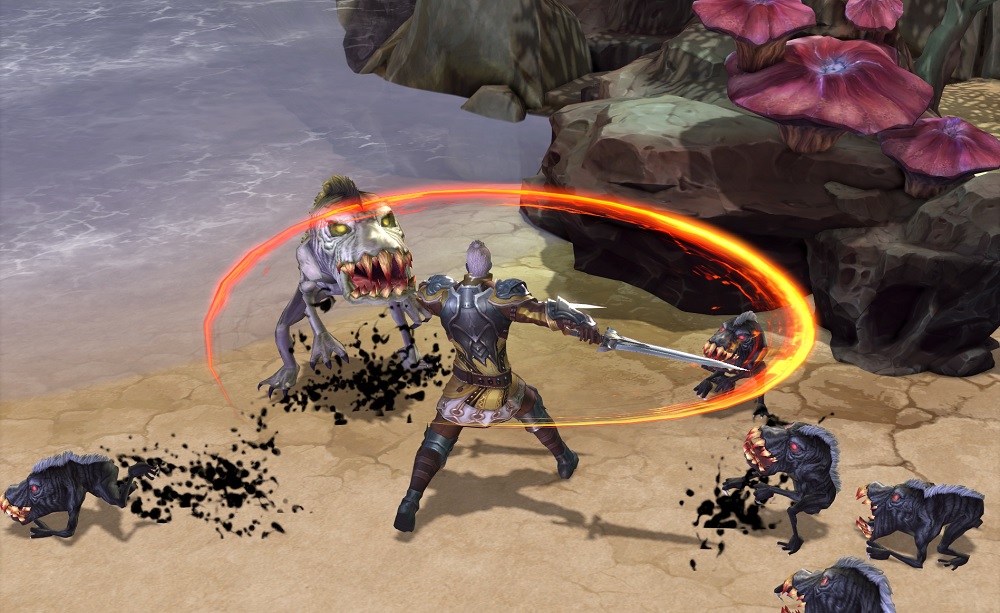 Above: Some of the enemies you fight in Devilian are weirder than others.

The loot cycle isn’t strong enough to keep you playing

To Devilian’s credit, it gives you a lot to do in its endgame. Once you’ve gotten to level 50 or so and have completed most of the quests, you can run each of the four final dungeons, run an Archdevil Dungeon (which requires powerful gear to enter), do a couple runs of the Abyssal tower (where you climb floor after floor of monsters in order to earn currency to buy armor), do quests in the Infinite Training grounds for the chance at item drops, or open rifts to fight powerful boss enemies in spontaneous events around the world.

But these activities are permutations of the same thing; corralling enemies and using the same combination of eight or so skills you learned near Devilian’s beginning. I’ve only ever felt like I couldn’t get away with standing around and spamming spells and healing potions the first time I tried a dungeon on the hardest difficulty I could. I had to keep an eye on what my enemy was doing for the first time, and I liked the challenge. Turns out I simply didn’t have good enough gear.

Usually, the gear itself would be what would entice you to keep running these same loops, but I haven’t found a piece of gear I really want to get, since the only difference among all the pieces of armor are numerical. Even worse, it can take tons of resources just to upgrade a single artifact (which you use to upgrade gear), and you can fail the enchantment process you use to make those artifacts stronger. So even when I had everything I needed to create a better item, I could end up back where I started, except without any of the materials I needed to try enchanting my artifacts again.

This might have been less egregious a few years ago, but when every Exotic gun in Destiny feels unique, when every new Legendary gem and item set in Diablo 3 grants your character new abilities, Devilian’s gear doesn’t have the same allure. And without that draw to make the grind worth it the spell games like Devilian can cast on dedicated players breaks completely.