It doesn’t give its story enough attention

Devilian keeps its story in the background, relegating it to quest dialogue; you can count the number of cutscenes on one hand. Early on, I read as much of the quest text as I could, but with the number of quests it contains, I quickly gave up. Some quests text pops up when you talk to a quest-giver. Sometimes you get a small notification letting you the quest you’re on has advanced to next stage, and you have click through to find out what your new quest actually entails. Some quests come out of nowhere, and happen entirely disconnected from any real story. And none of them really matter, because they all have you doing the same two or three things.

The writing behind some of the quests doesn’t help, either. One quest has you collecting bones from skeletons. After killing a few of them and completing the quest, the quest-giver will tell you she needs a specific kind of bone (hip) instead, starting another quest where you again have to kill skeletons for their bones. She then tells you to get yet another specific kind of bone (femur). You do this at least three times, doing the exact same thing under different contexts.

Devilian doesn’t do a great job of speaking through its world, either, and I think that’s a bigger crime here; I skipped most of the dialogue in Diablo III and still got a good sense of what I was doing. I never got that from Devilian, and it made the grind to its endgame far less interesting than it would have been otherwise. 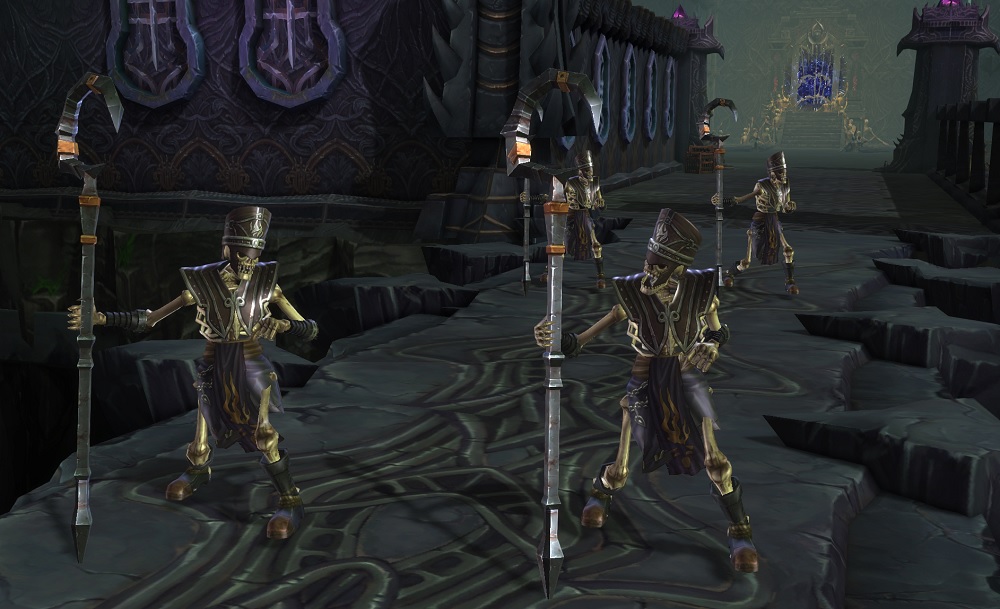 I haven’t seen gear quite like the dresses and high heels of the Cannoneer before, and while most of what they wear doesn’t seem the least bit combat-ready, I appreciated that it wasn’t the typical combat gear you see in other MMOs and action games.

Beyond that, however, you could easily mistake Devilian for just about any other fantasy game out there. The other classes in the game have gear typical of the fantasy archetypes; the Berserker wears a lot of heavy armor; all the Shadowhunters I encountered looked like a combination of Alucard from Castlevania: Symphony of the Night and Vincent from Final Fantasy VII.

The Evoker wears a lot of robes, and showcases Devilian’s cringe-worthy approach to women. The breast physics are absurd, and whenever you approach someone with breasts for a quest, expect them to bounce around like saloon doors made of gelatin. It’s not just the physics, either; in the game’s first dungeon, Elara (the person who guides you through the first few moments of the game) gets captured by a demon. When you finally find her in dungeon minutes later, the camera lingers on her just long enough for her to writhe in pain, her breasts to scuttle around beneath her dress.

Devilian’s aesthetic is as bland as it is gross, and aside from some neat and colorful spell effects, it doesn’t do much to draw you in.

The competitive multiplayer is a dud

One of the reasons I wanted to play Devilian to begin with was its competitive multiplayer, which at first glance looked like a simplified version of online battle arenas like League of Legends or Heroes of the Storm. But it’s too simple to take seriously, too clumsy to enjoy for what it is, and not consistent enough to invest in.

The multiplayer takes place on one of two maps: an enormous 20-versus-20 map, and small 3-versus-3 arena. The larger map has you running among capture points, though you can snare a few towers that you let you see parts of the map or kill a monster that grants a few more points towards the goal. The smaller maps works more like your average deathmatch.

Both modes seem exceptionally unbalanced right now, and I’ve caught many conversations between players about the strength of the Evoker class. I think a larger problem, however, is the movement doesn’t feel tuned to fast, reactive skirmishes; attacks and spells lack precision, which means it’s nearly impossible to escape an ambush. And since almost every spell’s area of effect deals damage to groups rather than single targets, you’re often dead the moment someone (especially an Evoker) throws the first spell. The smaller, 3-on-3 map works a bit better since it’s less chaotic, but it still suffers from these same issues. In a game with several other ways to spend your time, this one feels like the biggest waste of it. Above: When Devilian’s dungeons get going, it might be hard to keep track of your character.

And so is the Devilian form

Every class has two forms: a regular form you use throughout most of the game, and a Devillain you can activate after you’ve filled a meter. It looks kind of cool, as the character’s look changes dramatically (the Cannoneer, who carries large gun around with her, gets it infused into her arm, for example). In all the hours I spent playing, I activated my Devilian once, just to test it out, and it had the opposite effect of what I expected: Rather than feeling like I could kill anything, I felt confused and weak.

The Devilian form comes with its own set of gear and experience points, which you have to go out of your way to get. You have a different set of skills, and certain areas of the game require you to use it. But I never once felt like I needed to use it, or bother to learn the form’s intricacies. I just didn’t see the point, and I forgot I had it until I entered an area where I was forced to use it.

The constant pull to repeat a set of activities to see numbers go up permeates every game like Devilian. Even now, I’m thinking about running a few more dungeons and seeing if I can’t get some Heroic gear out of it. But almost any game with loot will make you want more of it, so hitting that part of the brain’s reward center isn’t enough to make for a good game.

Devilian could evolve into something great, eventually; none of the games I’ve compared it to started out as good as they are now. But until it makes its classes more interesting and diverse, engages me with more meaningful rewards, and makes its world more fun to explore, I don’t see why I’d choose it over any other outlet for my loot lust.

Devilian is available now for PC and is free to play. The publisher provided GamesBeat with codes for temporary Patron Status for this review. Patron Status grants bonus experience, access to additional character and inventory slots, some cosmetic items, the ability to post announcements in chat, and a few other minor bonuses.